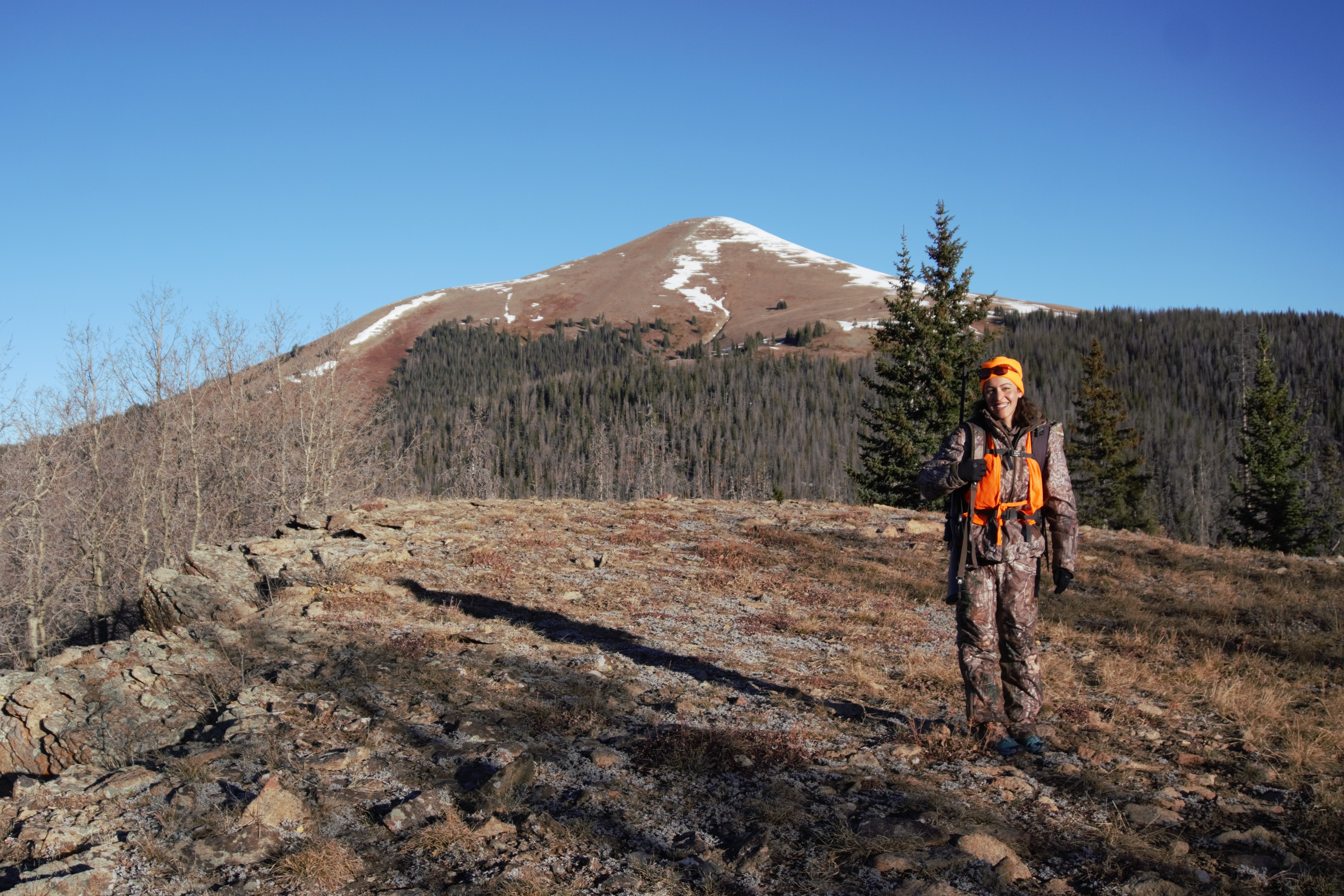 Liz was born and raised in the California Coast Range and was lucky to live in the hills of the relatively small (by Bay Area standards) town of Los Gatos with a park behind her house. “I spent a lot of time running around on deer trails under oak trees, and through poison oak, unfortunately,” she said. “We had a garden and orchard, would harvest mussels on the coast during fall and winter, cut and dried apricots at my grandpa’s orchard in the summers, and frequently hosted dinners for family and friends, so I grew up with a solid appreciation for the connections between nature, food, and relationship-building.”

Her grandfather and his two brothers often told stories of hunting and fishing in Northern California, and all three of them had deer mounts up in their houses. “Although those hobbies were not directly passed down to my generation, they were at least familiar to me,” Liz says. “Now my Great Uncle Jerry likes to talk to me about hunting and he seems quite pleased that my brother and I have both tried to pick it up despite not having grown up doing it.”

She started hunting during 2012 in California. “My boyfriend at the time had grown up duck hunting and after asking him too many questions about it, he told me to just come along and see what it was like for myself,” Liz explained. “At the end of that year we took a six-week road trip to Alaska. En route I shot my first dove (near Colusa, CA) and first duck (in Fairbanks, AK), the only banded bird I’ve shot to this day.”

Liz also learned to salmon fish in Alaska and fell even more in love with fish, wildlife, and big, wild, open spaces. She would have moved to Alaska, but all of the geoscience jobs were in Houston at the time, resulting in a move to Texas in 2012. While living in Houston she made time for both hunting (doves, ducks, deer, hogs) and fishing (salt and freshwater) along with gardening and cooking.

She worked as a geoscientist for the US Geological Survey for two years and then in the oil and gas industry, in various capacities, for six years, which coincided with a move to Colorado. Liz joined Backcountry Hunters & Anglers in 2018 during a fall membership promotion for a Pint Night at Upslope Brewing in Boulder. “I learned about BHA in 2017 when Utah Rep. Jason Chaffetz foolishly introduced HR 621,” she said. “I was outraged, and quickly found (via the internet) that so was BHA, so I’ve followed BHA ever since.”

During December 2019, Liz will complete her master’s degree in Environmental Policy and is hoping to work professionally on policy issues related to land management, outdoor recreation and conservation. “I was very fortunate to have had the opportunity to partner with Colorado BHA for my master’s capstone project,” she explained, “focusing on the expansion of public recreational access to Colorado state trust land and exploring and advocating for feasible funding and policy solutions.”

Liz hunted elk during 2017 and brought three people completely new to hunting with her. She has deer, elk and antelope tags for 2019. “I’ve been trying to learn about hunting one new species per year,” she said. “I’m really hoping to pheasant and duck hunt again this year, and if I can make time, I’d like to go squirrel and rabbit hunting as well since I’ve never done either and they seem fun. Basically, I’m still a rookie and I’ll take whatever experience I can get.”

“I do like fishing, but in the summer I spend most of my free time trail running on public land … when the lakes freeze over it’s rare for me not to choose my snowboard or skis whenever I get the chance,” she says. “This summer I did technically start fly fishing, but only went out a few times. There is just so much to do in this state!” Liz lives in Boulder and was recently appointed to the Colorado Sportsperson’s Roundtable. She will serve until 2021. 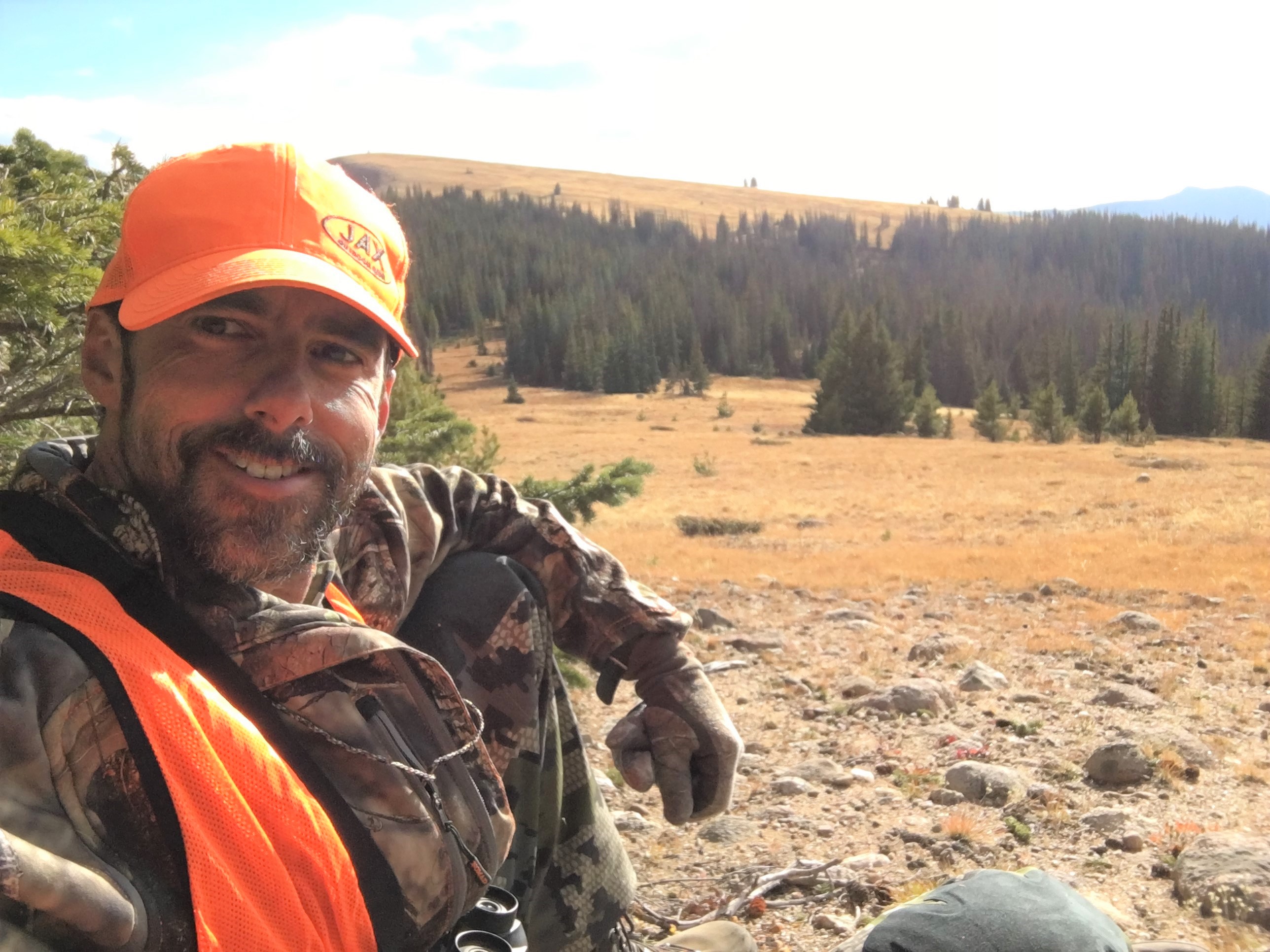 Kris was born and raised in Alpena, Michigan. “I grew up in a hunting and fishing family in northern Michigan and started fishing and hunting whitetails at a young age,” he said. “I stepped back from hunting for many years but was reinvigorated in 2015 after my first Colorado elk hunt with my father.”

“I’ve since had a growing passion for elk and mule deer hunting and strive to get out multiple seasons each year hunting Colorado public land,” Kris added. “After rifle hunting for elk I couldn’t help but get into muzzleloading to allow me to hunt in September, and then subsequently got back into archery to allow hunting the full month of September!”

Kris has a mechanical engineering education and background in automotive/alternative fuels/wind turbines/aerospace/medical industries including project management, systems engineering and product design. He currently manages operations at the University of Colorado Mountain Research Field Station in Nederland. “The mission of the Mountain Research Station is to facilitate research and education to better understand the unique patterns and processes of biotic and physical systems in mountains, and how environmental changes may influence these patterns and processes,” he explained.

In the past Kris has volunteered on the Nederland Parks Recreation & Open Space advisory board and volunteered as a worker and project leader for fire mitigation events in the Nederland area. “Living and working in the Peak to Peak region I am always working to help provide information and eyes to support the USFS, Boulder County and local authorities to manage the many challenges with forest use and habitat abuse in the surrounding area,” he added.

Kris lives in Nederland and hunts turkey, elk and mule deer. “I fish for relaxation and extra time with my kids!” he said. “I enjoy backpacking, car camping, hiking and snowshoeing with my wife and two children.” “In addition to hunting, my deep connection with the land is trail running & ultra-running, a love/addiction that has taken me so many places in the backcountry for the last 15 years,” Kris added. “I’ve come to combine my passions for hunting and running by often incorporating scouting missions into my trail runs.”

He aspires to contribute to BHA by being a catalyst and leader for BHA initiatives in Boulder County relating to policy as well as boots on the ground events. “I’m really excited to meet more hunters and anglers in the area and I will strive to help create opportunities for BHA members to get involved as well as create awareness of current regional issues that are of importance to BHA members in the Boulder area,” Kris explained. “With the ever-increasing front range population, I think it is imperative to pursue projects to conserve habitat and manage use so that all users including hunters and anglers can continue to enjoy the rugged and wild lands and creatures we are so fortunate to live amongst.”

Kris urges Boulder BHA members to reach out to him. “Let me know what you’re seeing in the field and what opportunities/issues you are seeing when it comes to how to better protect habitat, OHV concerns, illegal trail construction, access concerns, you name it,” he said. “We can’t fix it all, but as hunters and anglers we have a unique lens where we can see how habitat disruptions, abuse or change in use policy can have a disproportionate impact on the wildlife.”

He learned about BHA from another local habitat conservation advocate and sees BHA as “an avenue to positively effect change, conserve the land and animals we love, as well as an opportunity to continue to improve the image of hunters and anglers.” 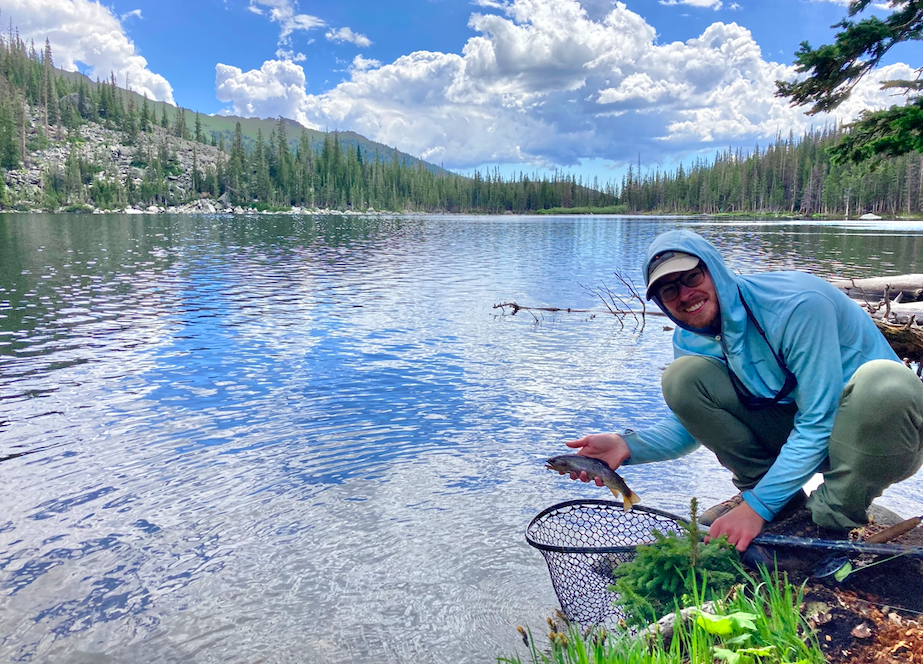 Bill was born and raised in northeast Pennsylvania. He went fishing for the first time at the age of 4 and has been doing it ever since. “My dad was the biggest mentor in my life, I owe my passion and love for the water to him,” Bill said. “He started me out with trout fishing at a local pond and slowly moved me into bigger water where we started targeting smallmouth bass, walleye, pike and everything in between. I was also lucky to have a small stream in my backyard that contained some creek chubs. I loved getting off the school bus and heading right to my favorite fishing hole till dinner was ready.”

After completing a degree in environmental science with a minor in chemistry, Bill moved to Colorado. “Other than the outdoors, a major motivator for moving to Colorado was to get into a career I was passionate about,” he said. Bill currently works in environmental services for the City and County of Broomfield as a water quality technician. “I enjoy getting into the field and sampling on ponds, reservoirs and local streams,” he said. “I find a lot of value in this work as it helps ensure a healthy ecosystem for wildlife that calls our ever expanding urban environment home.”

Primarily an angler, Bill moved away from warm water species in the past few years and has started targeting trout for the most part. “I would blue line for brookies in the Appalachian mountains when living in Pennsylvania and have transitioned into an alpine junkie,” he said. “I primarily target cutthroat trout in high mountain lakes and streams in Colorado. When those options are frozen over, I head to the local tailwaters for technical fishing where I can fine-tune my skills.”

“I didn’t grow up in a hunting family and haven’t been able to get into the sport yet,” he added. “I would like to get into waterfowl and upland hunting, both for food and fly tying materials. I’m hoping to find a mentor through BHA to get started in this pursuit.” Bill lives in Denver with his partner Bethany and their Australian Cattle Dog Scout. He heard about BHA while listening to Cal’s Week in Review Podcast hosted by the MeatEater group.

“I joined BHA after moving to Colorado and recreating on public lands for my first summer in the west,” he said. “After seeing these incredible spaces, I wanted a way to give back to, and fight for, the land I use so often.” Bill’s goal is to facilitate more opportunities for the angling community to engage in BHA.

“Many anglers in Colorado hit the famous tailwaters that are controlled by water and energy companies while passing up the opportunity to fish pristine and free flowing water on public lands,” he added. “I believe engagement with these spaces is key to developing a love and passion for them, which in turn creates more advocates for our public lands and access to them. I hope to host events that get people into more remote fisheries where the catch and experience are of equal value.”