The state constitution says all waters in New Mexico belong to the public. In 1945, the state Supreme Court ruled that all waters should be open to the public for recreational use, provided the public does not trespass across private land to reach them. Yet for decades, landowners have closed portions of the Pecos, Rio Chama and other streams with the support of NMDGF.

We believe this question of whether landowners and NMDGF can prohibit access to a public resource is a major issue for New Mexico hunters, anglers, boaters and other members of the public. To read more about stream access in New Mexico, our reasons for filing the lawsuit and what might come next, check out the overview, FAQs and history of public waters access below. In the meantime, here’s where we stand now:

On March 13, NM BHA joined the Adobe Whitewater Club and New Mexico Wildlife Federation in a lawsuit that, we believe, will settle once and for all the question of stream access. It asks the state Supreme Court to strike down regulations approved by the State Game Commission in 2017, because the regulations permit landowners to block the public from using streams that run through their property. We argue the regulation violates the state constitution.

On March 30, the Supreme Court took up the case and gave the defendants – Gov. Michelle Lujan Grisham and the State Game Commission – 20 days to respond to the complaint.

On April 17, a group of landowners, lodge owners and organizations requested to intervene in the lawsuit, saying they would be harmed if the stream access regulation was overturned. The Supreme Court has yet to determine whether they will be allowed to intervene. The intervenors include individuals and corporations that have donated tens of thousands of dollars to Gov. Michelle Lujan Grisham and Attorney General Hector Balderas, as well as the New Mexico Cattle Growers Association and the New Mexico Council of Outfitters and Guides.

On April 20, the Attorney General’s Office responded to the lawsuit on behalf of the State Game Commission. It agrees that all waters of New Mexico belong to the public, but rather than staking out a position it asks the court to “further examine” the state constitution to decide whether the stream access rule violates it. The Game Commission has not yet conducted a public vote on whether to support or oppose the lawsuit.

On April 20, the Governor’s Office responded, saying the governor “respectfully suggests that this Court resolve the dispute,” and argues that she is not a proper respondent and should be dismissed. The governor appoints all seven members of the State Game Commission and can replace them without explanation, as she did with Chairwoman Joanna Prukop in December. Under Prukop’s direction, the commission had already put a moratorium on the regulation and had been inching toward rescinding it through its own rule-making authority when Gov. Lujan Grisham dismissed her.

On April 23, New Mexico Senators Tom Udall and Martin Heinrich issue a statement defending New Mexican's access to public streams, saying "New Mexicans have always understood agua es vida, water is life. We know how vital managing this precious resource is to preserving our economy, our environment, and our traditional approaches, many of which have been in place since before statehood. Whether through the courts or not, we must all reaffirm that New Mexico’s rivers, streams, and lakes belong to the public." Read the full press statement here.

The next moves are up to the Supreme Court. It could order additional legal briefs, or schedule oral arguments, or make a decision based on its own findings. We are hoping to see a final decision sometime this year and will update this report as additional information comes in. 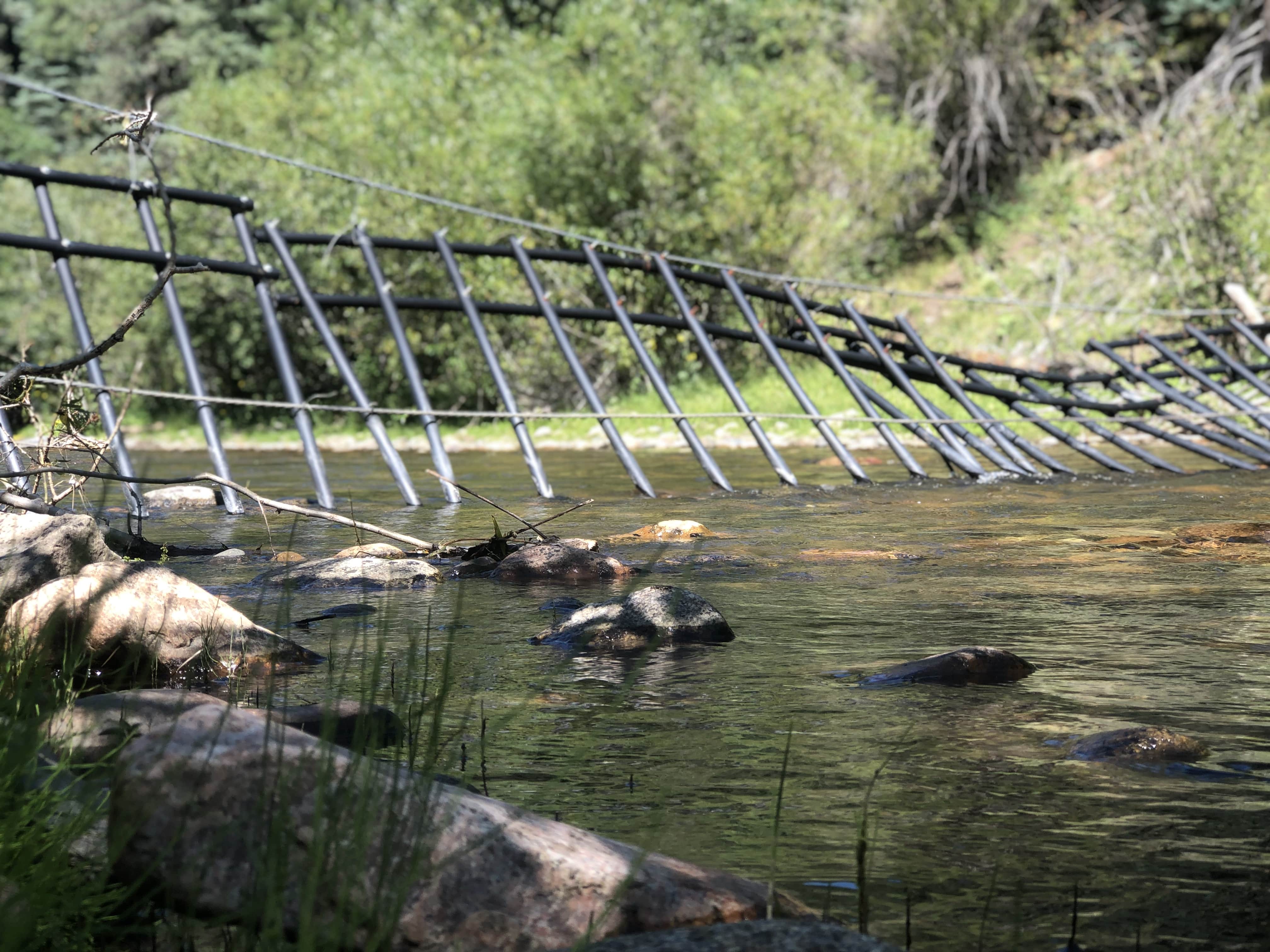 Since New Mexico became a state in 1912, the public’s right to use all streams and rivers for recreational purposes has been enshrined in the state constitution. This right, which was upheld by the state Supreme Court in 1945, allows us to fish, boat or recreate in any waterway so long as we do not trespass across private land to get there.

Nevertheless, New Mexico landowners have consistently been allowed to block the public from fishing in streams that run through their property – with support from the New Mexico Department of Game and Fish. For years, its regulation books said fishing in so-called “private waters” constituted trespassing.

This confusing situation began to change in 2014 when a state legislator asked then-Attorney General Gary King whether it was legal to block the public from using a stream that ran through private property. King, referencing the 1945 decision by the New Mexico Supreme Court known as “Red River Valley,” stated that the matter was clear: All rivers in New Mexico are open to the public for recreational use. Whether the waters run through public or private land, the public has a right to fish or float there so long as individuals don’t trespass to reach the stream or to leave it.

Anglers and boaters celebrated the opinion, but private landowners and lodges took to the legislature to voice their protest, successfully lobbying for a 2015 law that gave the state game commission authority to block the public from using public waters. In 2017, the commission did just that. It adopted a new rule that allows streamside landowners to petition the commission to declare stretches of water as “non-navigable.” If the petition is approved, that stream is officially closed to the public. In 2018 the first round of applications was approved, resulting in the closure of stretches of the Chama, Pecos, Alamosa, Mimbres and Peñasco rivers.

Although a new game commission appointed in 2019 has made promising moves toward following the New Mexico Constitution, the 1945 Supreme Court decision and the 2014 attorney general’s opinion, anti-access forces in have donated tens of thousands of dollars to top decision-makers, including the governor, the attorney general and legislative leaders.

It was against that backdrop that anglers and boaters started discussing a lawsuit to force a final decision on stream access. On March 13, 2020, the New Mexico Chapter of Backcountry Hunters & Anglers, together with the New Mexico Wildlife Federation and the Adobe Whitewater Club, filed a lawsuit asking the New Mexico Supreme Court to strike down the commission’s stream closure regulation as unconstitutional, and to open all waters in New Mexico for public use – provided that users do not trespass over private land to either reach the river or leave it.

NM BHA and the other plaintiffs fully expect the anti-access side to fight hard to keep these waters closed to the public. We, however, look to the state Supreme Court to follow the precedent outlined 75 years ago and to open these streams once and for all. If we prevail, it will be up to the game commission to protect newly opened fisheries resources and habitat through education, signage, catch-and-release regulations and increased enforcement. We hope to have a final decision by the end of 2020.

In March 2020, New Mexico BHA and two other New Mexico outdoor groups filed a lawsuit against the State Game Commission and Gov. Michelle Lujan Grisham asking the state Supreme Court to invalidate a regulation that allows the game commission to prohibit the public from accessing a section of stream that flows through a landowner’s property.

Since New Mexico gained statehood in 1912, New Mexico sportsmen and women have had the constitutional right to fish, boat or otherwise recreate in any stream so long as they did not trespass across private land to get there. The State Game Commission has long ignored that right and allowed the issue to become muddied, despite the fact that the New Mexico Supreme Court addressed the issue of public river access in its 1945 landmark case State ex rel. State Game Commission v. Red River Valley Co. In that case, the court concluded that the public – meaning anglers, boaters or others  – may fish, float or otherwise use streams and streambeds where they run through private property as long as individuals doesn’t trespass across private land to access the waters or trespass from the stream onto private land. In the years since the 1945 decision, several New Mexico attorneys general have issued opinions supporting the court ruling.

Attempts to bring clarity to public stream access rights through the game commission have fallen flat, mainly because the issue is complicated and heavily politicized. This lawsuit is intended to invalidate the commission’s 2017 rule that effectively allows landowners to block the public from accessing rivers and streams that flow across private property.

We recognize that with rights come responsibilities. If the public right of access is affirmed and previously closed streams are reopened to public use, the game commission has a duty to enact regulations to protect fishery resources and stream habitat, educate the fishing public about the limits of their access rights, and increase law enforcement presence in areas where additional public use is anticipated.

3. What does stream access mean for New Mexico’s economy?

4. Why is New Mexico stream access an important issue for BHA?

For anglers, boaters and other outdoor user groups nationwide, access to streams and waterways is the most important factor in our participation in – and the perpetuation of – our storied outdoor traditions. Our access opportunities, however, are far from guaranteed. Well-moneyed efforts are underway to change existing stream access laws, which vary widely from state to state, to bar us from fishing, wading, floating or otherwise utilizing these important resources. We believe that stream access laws, so essential to our outdoor opportunities, are not receiving adequate conservation or defense at a national level, to the detriment of hunters and anglers.

5. How would BHA prefer to see public access managed in New Mexico streams?

While we strongly support our state constitution and the public’s right to access public waters, we also respect private property rights. Should our right to public access be affirmed and maintained, we will be fully committed to working with a diverse group of stakeholders to find solutions that honor the resource, educate the public on wise use practices and balance public and private property rights.