As I sit here watching the sun go down, the chickens peck and the sheep do sheep things, I am chewing on a piece of backstrap from an antelope that not a week ago was living on a pasture that resembled more a golf course than the high plains of New Mexico.

It's August and that means green grass and antelope season. It is also the part of the year I love the most, because bugling bulls and archery elk season are right around the corner. Hunting turkeys is technically the beginning of the hunting season, but I feel like as much as I love it, it doesn’t count.

It is the first big game hunt of the year that gets my blood pumping about all the new hunting memories I will make this year. Another thing is very much at the forefront of my mind right now. It is just how damn lucky I am. Luck comes in various forms, but anybody who knows me knows that I consider myself to be the luckiest guy I know. Many a rolled eye has been caused by my declaration that it's “clean living and a clear conscience” that makes it so.

That luck showed up again last week as my buddy Joe, who is working hard to get the Armed Forces Initiative (AFI) portion of the BHA to Kirtland Air Force Base, called me and told me that two of our coworkers won guided pronghorn antelope tags that were donated to the AFI to send two military members on a guided hunt. The third spot was for the observer who dropped out and they need someone to go in three days. Initially I was skeptical as “observer” in military circles means you have been selected for an additional duty of watching your fellow brothers-in-arms pee in a cup after winning a “golden ticket” and being screened for drugs.

Luckily for me, as Joe insisted, this one was a much better duty. Along with the two lucky hunters was a spot for a third person to take pictures and be a helping hand. I have been known to drop everything and head to the hills in the past, and Joe knew this, so I was, in despite my lack of social media and not knowing anything about filters or Instagram level picture taking, headed north in my trusty old International Scout. When we arrived in Las Vegas, New Mexico, the hunters bought tags, and we stopped for some last minute beer and ice. After that we had a 30-minute convoy to some of the most beautiful country around and ended up at the Lodge of NM Trophy Outfitters.

There were three groups of buddies: the largest was from Texas. Then there were the “military guys,” which was myself, Capt. Luis Otero, an intelligence officer as an observer, glasser, beer hander outer, and general helper, the two military hunters, MSgt Ryan Alsch, a SERE instructor, and MSgt Aaron Myers, a CV-22 Osprey special mission aviator. The third group was a pair of co-workers from North Dakota.

The lodge was a newly erected steel building with a wide-open common area complete with pool table, couches, TVs and a spacious kitchen. Downstairs had a few bedrooms and bathrooms as well as a loft full of bedrooms. In every direction and on every wall were trophies and rugs that undoubtedly held many stories with them. After the sighting in of the rifles and drooling over our newly found friend’s rifles, the nine hunters, three guides and I cracked a cold one and started the well-worn history shared by new hunting friends of tall tales and camaraderie building.

As fun as this was, I was starting to wonder why we weren’t out glassing and getting to know the area we would be hunting. I did realize this was a guided antelope hunt, and, judging by the amount of carbon fiber barrels and suppressors around with the combination of goats we saw on the road in, prior homework wasn’t a must. This anxiousness about not being out in the field was added to when the call was made that breakfast would be at 7am. I told my buddy MSgt Aaron Myers, “If this was an elk hunt, I’d be losing my mind!”

After breakfast and a short drive, we began unloading the UTVs and performing last minute checks on gear. As a non-trigger puller, I immediately busted out my new Vortex spotting scope and got to work. I could not believe it when in every direction that I looked 70+ inch bucks filled the impeccable glass. I busted out the rangefinder and pointed at MSgt Ryan Alsch and half-seriously asked him, “It's 1100 yards. What are you waiting for?”

After loading up in our guide Zack’s Tacoma we wished the others good luck and headed out. We were immediately greeted by a light drizzle and plenty of goats to look at. We weren’t 10 minutes away from the staging area when we came to a gate and glassed up an absolute stud of a buck with 16 inch horns and prongs above his ears. One of the horns curved inward and one back, we declared this guy an opening morning shooter and the stalk was on. We weren’t two steps away from the truck when Aaron yelled, “Watch it!” just as Zack was about to step on a rattlesnake. The snake and us parted ways and we started our stalk.

There are always too many rattlers and never enough cover in antelope country. Lucky for us there are almost always small undulations in the land, which we used to get to a reasonable range and give the buck a thorough looking over. He was just as great now, as he was pre-snake so we deployed shooting rests and range finders. 680 yards was about where the herd started getting nervous and Aaron set up. As Aaron had done thousands of times before, he settled in, found his spot and with a snap from the suppressed 6.5 PRC sent a hand loaded 147 grain Hornady ELDM 620 yards downrange.

The buck, while hit, managed a few steps before Aaron placed another round behind the shoulder, and down he went. At this point we shook hands and watched the downed buck. What happened next was a first for me, though: We found another buck and put on a second stalk. The number of quality bucks on this ranch was amazing, and we were quickly chasing another great specimen. It was cool and drizzling; that combined with the reduced rifle noise in my mind allowed us to get on another herd pretty much immediately, and stalk No. 2 was on.

We initially lost the buck as he moved off away from us and, as antelope do in the rain, bedded. We moved forward 50 yards at a time and searched and searched. Just as utter confusion was about to set in, Aaron somehow spotted just the absolute tip of a black horn sticking out of the grass. As we closed the distance the bedded buck was oblivious to our presence. The assist goes to the herd of cattle and persistent drizzle that would last all day. It was time for Ryan to go to work. Ryan was undoubtedly the most experienced outdoorsman of the group, thanks to his years as a survival evasion resistance and escape (SERE) instructor, but this was only his second hunt. His experience with an M4 transferred beautifully to his long rifle, and soon two bucks were down.

Upon approaching Ryan’s buck we were gladly surprised that he was just as good as expected since he didn’t get the meticulous inspection the first buck did. At this point it was hard to believe the hunting was already over, as it was only about 9 am. There were no regrets, though; the second round of congratulations were handed out, guts were removed and we marked buck No. 2 on our onX. Since we were a couple of miles from the truck by now we decided we needed to get to working on buck No. 1. Luckily it was on the way back to the truck, and the weather was nice and cool.

The first buck luckily died about 20 yards from the road, so it was nice and easy to get him on ice. Ryan’s buck was a different story. He was just about equidistant to two parallel roads and was a mile away. We were more than happy to get some blood on Ryan’s new Mystery Ranch pack. Against the recommendations of the guide Ryan happily loaded the entire antelope up on his pack, hooves to the sky, and joked, “I’m supposed to make a living doing things like this.” Ryan is the type of guy who never stops smiling and always has an over-the-top, hilarious story to tell, so it was no surprise he was laughing and joking as we made the mile long trek back to the truck happy in our success.

I feel like my expertise as an observer was absolutely key to the success of my buddies. Without me, they may still be out there wandering the plains. I am kidding, of course, but my role as an observer allowed me a different look at the hunting that I have learned to love. While I wasn’t flinging arrows or pulling the trigger, I learned that a hunt has many many sides, from the fantastic guides we had to someone who is now tagged out and a helper, as well as an observer like myself - all sides of this great experience we all share make it something truly special to be a part of.

I still feel like the luckiest guy in the world. A large part of that is being in the military. I am part of the New Mexico Air National Guard and have been for 22 years. I have the honor to serve not only my country but also my state. The list of perks that come with a job like mine are endless, such as the camaraderie of men and women with the same mission and desire to carry out that mission, the ability to serve our home state in case our fellow New Mexicans need us, along with the ability to deploy in service to our nation. No military member raises their right hand for the 10% off or even the occasional donated hunt from very generous donors. We do it because it’s in us to serve and be a part of something larger than ourselves. I do it because my family has and my boys deserve a better world for them to grow up in, and if I can do my very small part to make that possible, than it is my honor to do so.

I can’t thank BHA, the generous donors of the hunt, and NM Trophy Outfitters for letting us be a part of this great experience. It was truly an awesome time. 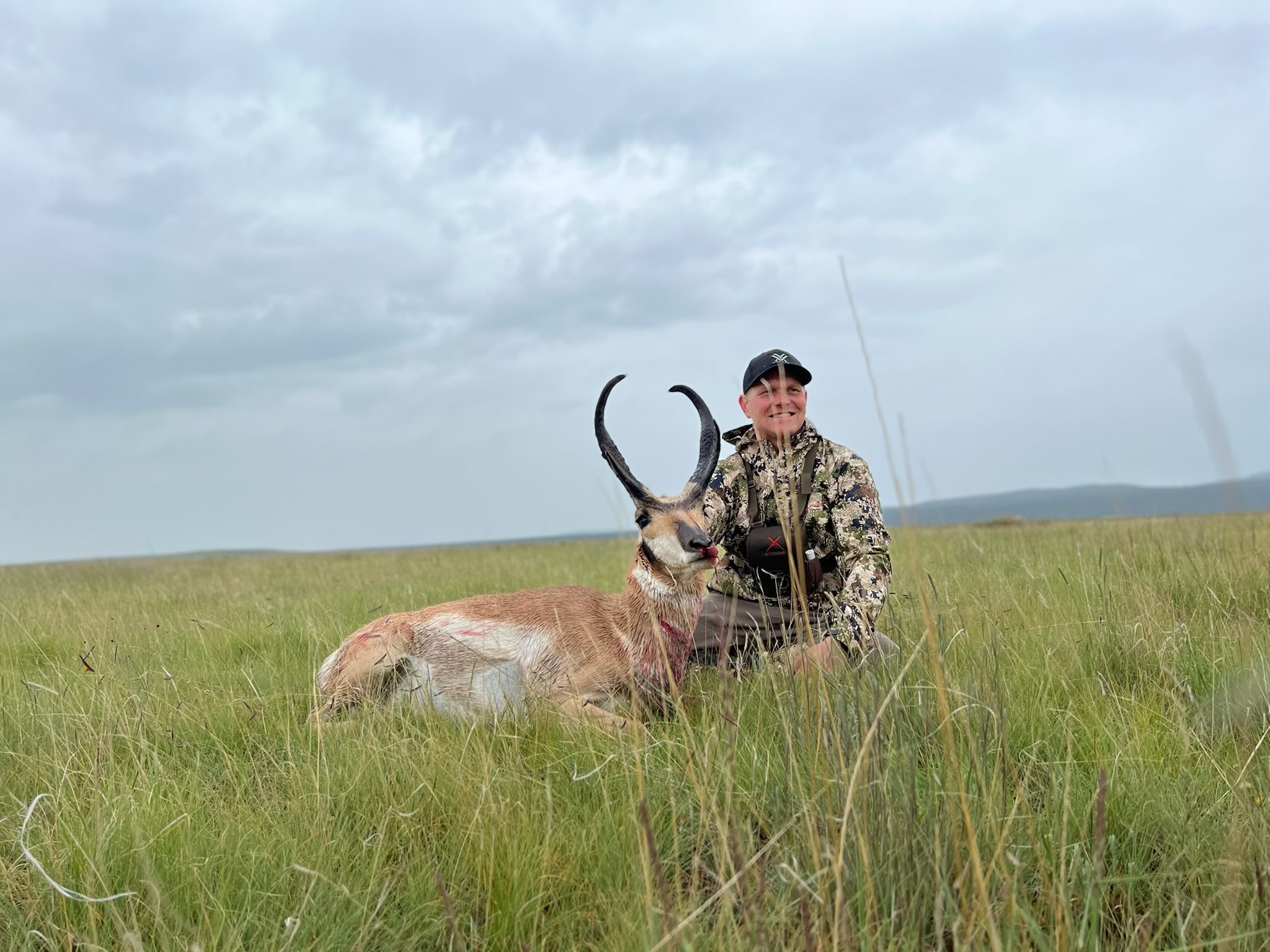 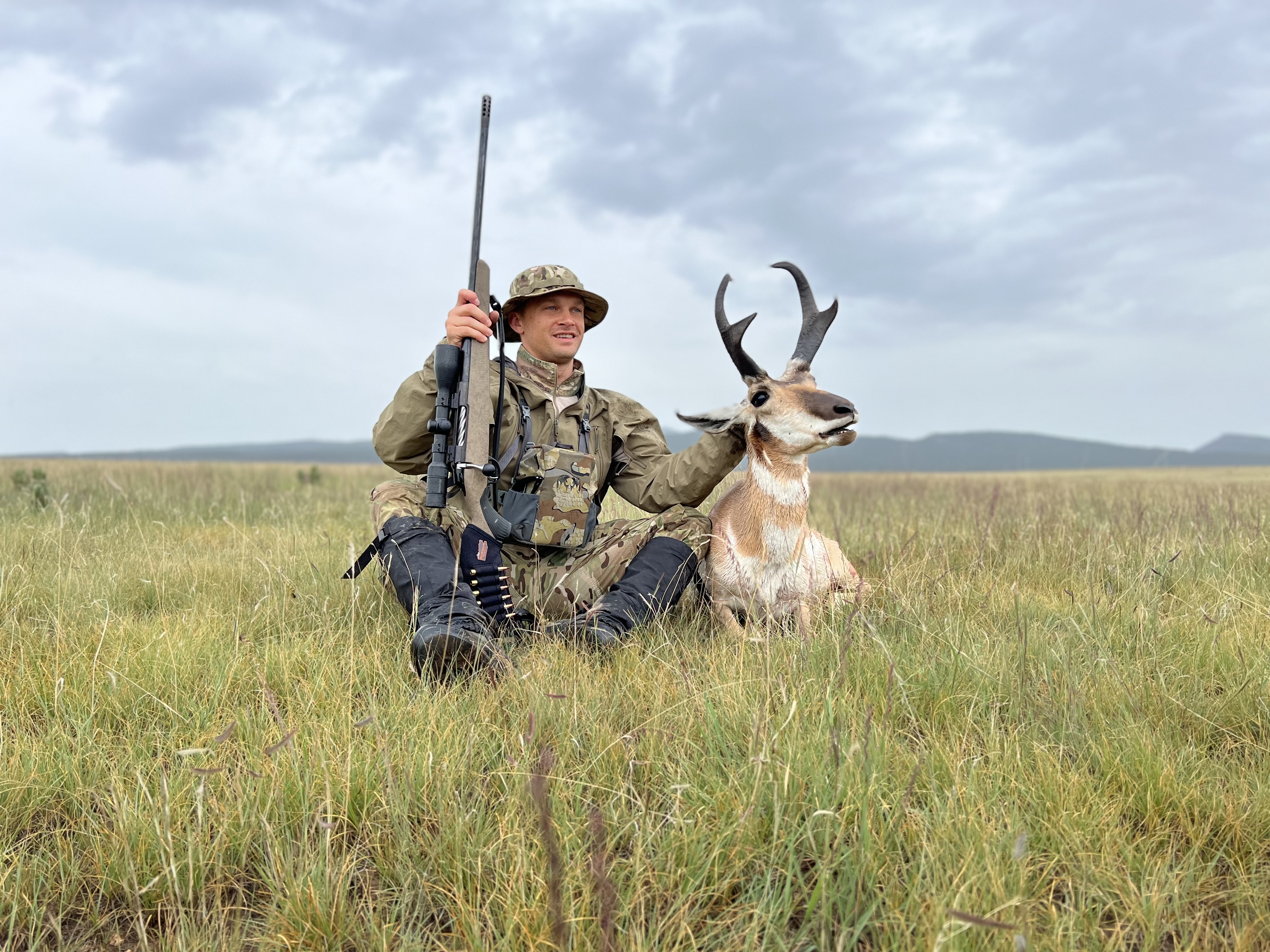 About Luis Otero
share on
See other posts related to New Mexico BHA AFI Comms Channel
Get the latest news and stories, right to your inbox.
Search
Local Chapters