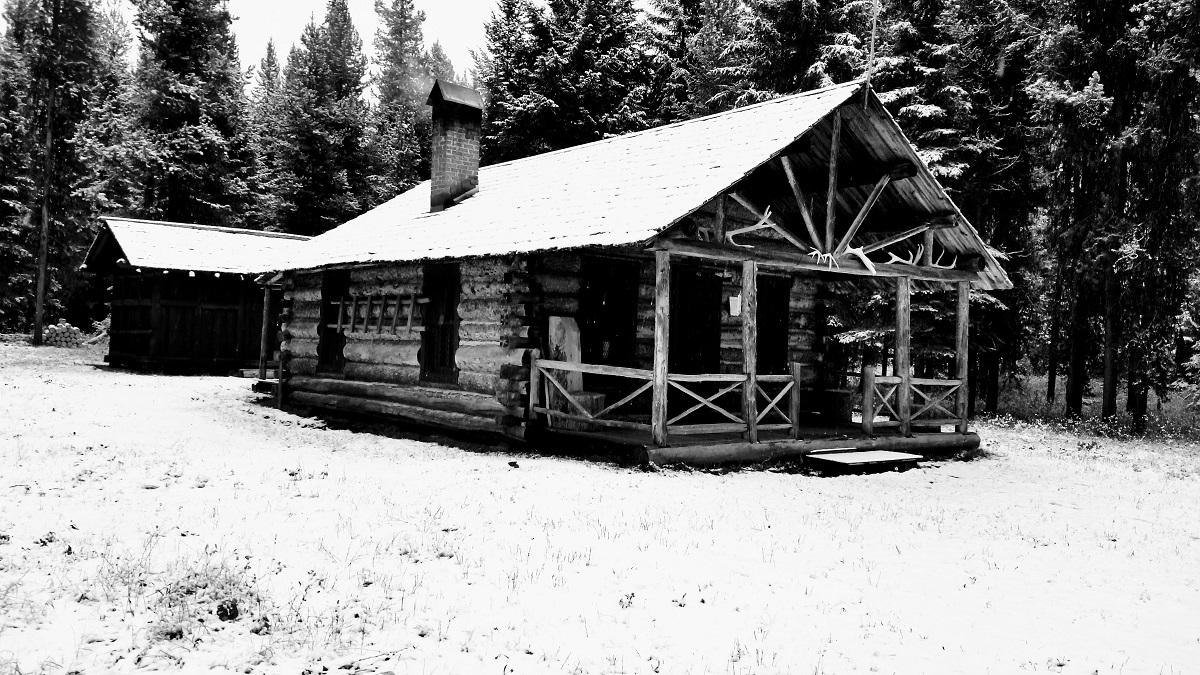 Every night before I go into the remote ranger station in a forgotten wild corner of northwestern Montana, I lay in bed, gripped by fear, imagining potential encounters. Giving time to these images of wild animals, as well as to poachers, outlaws and Border Patrol agents known to frequent this terrain, keeps me close with my mortality, allowing me to shape-shift from the ease and predictability of town into the wild places I value. The stillness and isolation of the wildness are profound enough to make me gasp when I give pause. Eventually, I fall asleep amid my ritual, but not until my heart slows.

Safely at the ranger station that I’ve been coming to in the fall for 19 years, I am lulled out of fear and into the romance. I listen to a landscape hushed by snow. Each fluffy aggregate in mid-flight is too light to measure, yet the snow’s weight quiets the land. Cascades of snow whoosh off branches. The river shushes nearby.

Most days, squirrels chatter, waxwings trill and ravens caw. Trees creak like wood crackling in the stove. But the stillness roars the loudest.
Except, it wasn’t all romantic. A man pointed a rifle at me from the other side of the river then dove for cover behind a rootwad. This joker’s reaction made me link him to poacher in these parts.

A packrat incessantly rummaged around in the attic every night.

And on the last day that I would hike through miles of wild back to civilization, Old Man Winter blows a storm down from the north. Like an animal, the barometric pressure leaves me restless. Hatching up the cabin, I travel on a cosmic journey through interstellar space, passing constructed galaxies and endless constellations of snow.

Just like the night before I walked into the cabin, last night’s sleep eluded me. What is it in the human psyche to transmogrify wild animals into villains and monsters waiting around every corner to tear us limb from limb?

I run into massive snowshoe-sized griz tracks, bigger than my head. My amygdala alerts my nervous system as hair stands attentively, setting my body’s fear response into action. I flash on the times Border Patrol captured a horse-sized grizzly on their cameras. Then to the time I surprised a griz cub, and the sow charged me from 40 yards out, running so fast she was flat to the ground, until, at the last second, she veered off. Adrenaline and cortisol flood my bloodstream. Blood flushes my face as sweat cools. Shorter breaths force me to keep going. I face my fears.

Just like the night before I walked into the cabin, last night’s sleep eluded me. What is it in the human psyche to transmogrify wild animals into villains and monsters waiting around every corner to tear us limb from limb? The eco-philosopher Paul Shepherd suggests these primordial fears are older than memory, beyond the oral tradition of storytelling and images painted on cave walls and perhaps coded into our DNA.

Nervously glancing behind every bush and tree, I carry an ax and a ski pole. Considering the size of the prints in the snow, I unholster the mace. I yell, “Hey, Bear!” Usually, I don’t make sounds because I like to see wildlife. I yell, but the dense, sodden trees soak all traces of my fear. Wolf tracks join the trail from the woods. I sweat. Not ideal on a frigid day. Weather will kill before anything else.

Fresh lion tracks join the trail now, too, my first experience rubbing shoulders in such proximity with a predator trifecta. I expect to run into the grizzly on top of a kill in the creek, which this trail forces me to cross. Here, I strip to ford the creek’s five braids. Falling in these slush-filled waters means hypothermia. Visibility is nil. I listen for clacking teeth or deep woofing. My fear lightsabers around. So much fodder for future night befores.

On the other side, I quit yelling. The shouting only makes my heart beat faster, like a homing beacon for a large bruin’s free meal rather than a safety measure. In the map of the fresh snow, wolves go north, lion south, bear west and me east. Cardinal directions.

Continuing on, I imagine the door to my car locked, frozen, and snow covering my body next to its inaccessible hulk the last few miles. Unscathed by the large megafauna but chewed up by the deep, glistening, white fangs of winter with its bitter-cold teeth sunk deep.

BHA member Benjamin Alva Polley is a freelance writer living in Missoula, Montana. His work has been published in Popular Science, Esquire, Field & Stream, Sierra, Mountain, Earth Island Journal, and other publications at benjaminpolley.com/stories. He has a master’s degree in environmental science and natural resource journalism from the University of Montana.

This article originally appeared in the Winter 2022 issue of Backcountry Journal. Join BHA to get 4 issues a year right in your mailbox.

Benjamin Alva Polley is a freelance writer living in MIssoula, Montana. His work has been published in Popular Science, Field & Stream, Esquire, Sierra, and other publications.