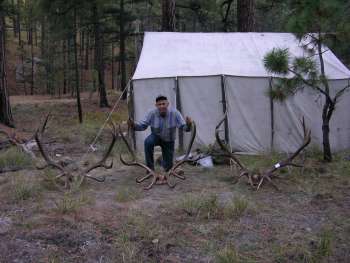 Some outdoor recreationists say they’ve been battling the Bureau of Land Management and the Forest Service for 30 years when it comes to access to some public lands. Now, they say there’s hope. But it’s not just people who enjoy the outdoors who will benefit. Recreation groups say the industry draws billions in consumer spending and supports nearly 70 thousand New Mexico jobs.

“The big land locked areas that historically used to have a lot of access are all along the eastern front of the Gila National Forest.”

Oscar Simpson is the Backcountry Hunters and Anglers New Mexico State Chair. He says most recreationists rely on public land to hunt or fish.

“As a native New Mexican, over the years, especially the last 30 years, I’ve seen an increase in access through private land being shut down and that access is being denied for either BLM or Forest Service land,” explains Simpson.

Right now, 540,000 acres of federal public land is inaccessible to many people, in part because there aren’t public roads to get there. However, after reading the president’s budget proposal, Simpson says he’s hopeful that could change. That’s because Obama’s plan calls for full funding of the Land and Water Conservation fund- $900 million. According to the New Mexico Wildlife Federation, $15 million of the funding will be earmarked for improving access to public lands.

He says it could also mean more money for New Mexico’s economy.

A portion of that money is generated from hunters and anglers. It’s a huge economic incentive Simpson says is currently hindered by access to public lands.

Conservationists say they don’t know exactly how the funding would be used– but they’re thinking the group would be buying land and access points to that land.