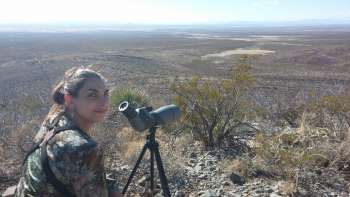 Today, President Obama made a presidential declaration under the Antiquities Act to designate 496,000 acres as part of the Organ Mountains-Desert Peaks National Monument in Southern New Mexico.

The monument designation is the result of years of work by sportsmen, community members and businesses to provide protection of this iconic landscape – known by sportsmen for its quail, mule deer, antelope and javelina hunting.  The monument designation closely mirrors legislation (S. 1805) introduced by Senators Tom Udall and Martin Heinrich this year, which encompasses eight wilderness study areas.

“As a resident and sportsmen who hunts and knows this wild ground, there is no question in my mind that it deserves to be protected” said Las Cruces resident and New Mexico Backcountry Hunters & Anglers Board Member, Randy Gray. “Many sportsmen and community members worked hard to raise awareness of this area, I'm grateful their voices were heard.”

“This designation is a clear win for sportsmen and women who have been working to protect the Organ Mountains for years. It is an excellent example of how the Antiquities Act can be used to ensure the landscape America’s sporting families depend on is protected for the long-term, where Congress has failed to act” said BHA Executive Director Land Tawney.

The Organ Mountain Monument Designation follows on the heels of another popular Antiquities Act designation in New Mexico which established the 225,000 acre Rio Grande del Norte National Monument earlier this year.  The Antiquities Act was established in 1906 by Republican Congressman John Lacey and signed into law by Theodore Roosevelt.  Since that time, it has been used by presidents of both parties to designate monuments like the Organ Mountains.

In addition to ensuring high value habitat and hunting opportunities to future generations, the Monument designation is expected to provide an uptick of $7.4 million in revenue to the local economy, while also improving border security.