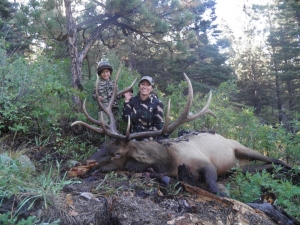 “There are many great public lands to hunt in New Mexico, but what makes the Rio Grande del Norte unique is the wide variety of wildlife that it offers, combined with the area’s overwhelming natural beauty. It truly is some remarkable country and fishing in the spectacular Rio Grande Box is a special experience” said Laddie Mills, a longtime New Mexican hunter and angler.

Retired Senator Jeff Bingaman, Senator Tom Udall, Senator-elect Martin Heinrich and Representative Ben Ray Lujan urged President Obama to make the designation and even sponsored legislation to protect the 240,000 acres of BLM land that lies north and west of Taos. This past December, Senators Bingaman and Udall sent a letter to Obama urging him to use his powers under the Antiquities Act to make the designation because the 112th session of congress was grid locked – none of pending public land bills were passed in the 2 year session

“Hunting and fishing on our public lands is a way of life that I have cherished all my life and that I was able to share with my children, and I hope that I can one day pass down to my grandchildren as well,” said Peter Lupsha, an avid New Mexico sportsmen. “The hard work put in by our congressional delegation, the overwhelming diverse public support from the Toas area and the local and state-wide support by sportsmen played a major role in convincing the President to designate the Rio Grande del Norte as a National Monument.”

“Whether you’re interested in chasing antelope in the grasslands, stalking elk and deer in the pinion & juniper sagebrush covered plateau,

or trout fishing on the Rio Grande River in the rugged & wild Rio Grange Gorge - sportsmen cherish this unique area and for decades have wanted it protected” said Oscar Simpson, Chair of the New Mexico chapter of Backcountry Hunters and Anglers (BHA) “I have spent numerous seasons hunting and fishing in the Rio Grande del Norte area and I can tell you each time I went I came away with a deep appreciation of how unique and vital this area is for wildlife and why it needed to be preserved for all to enjoy.”

Besides protecting a long-standing sporting tradition, the Rio Grande del Norte Monument designation is estimated to create 279 new jobs and generate $15 million annually – according to a study by BBC Research & Consulting.

The bottom line is that all recreational activities and traditional uses of these lands will be enjoyed and continued for future generations to experience the area as it is – wild and free to all.

Photo- Melissa Casias and her not-quite-6 year old daughter Sierra (who hiked into the backcountry for this hunt) with Melissa's beautiful public lands Taos-country bull elk.

Photo-Goldeneye on the Rio Grande River.