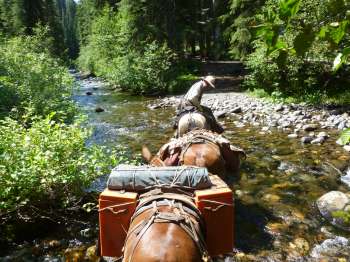 The descent into the river canyon offers sweet, pine-scented breezes and respite from the August heat as our two pack mules follow the lead horse like links in a chain. We’ve come to the Eagle Cap Wilderness after an absence of ten years to help a friend scout out camp sites for an upcoming elk hunt with his grown son. When they arrive to hunt, the canyon walls now carpeted in dark green fir and spruce will glow with the candle-light brilliance of thousands of tamarack scattered among the evergreens.

Before moving to Idaho, we hunted the Minam River canyon in the Eagle Cap every October, never failing to find elk. And what we find ten years later is a healthy ecosystem, a gin-clear river and a horribly maintained trail system. Our first day was a real trial, with success made possible only because of our seasoned animals and our own backcountry experience. Windfall after windfall blocked the trail on steep ground, making finding a way around the blockage downright dangerous. And of course, getting off trail means stirring up ground nests of hornets: I was the unlucky recipient of three stings and the horses and mules were not happy campers either! Finally, we gave up and dismounted to lead our stock for the next four miles.

We’ve noticed over the years the steady decline of the national forest trail system in the intermountain West in particular. Trails we once used yearly in the Frank Church River of No Return Wilderness have been abandoned by the Forest Service to the point we decided after 35 years to not hunt elk in there again. We were disappointed but not surprised to find the Eagle Cap trails in bad repair as well. The 1964 Wilderness Act includes these words: “for the use and enjoyment of the American people.” But without adequate trail maintenance those words are worthless.

Five hours into our ordeal we intersected another trail to find a sign telling us the trail ahead was closed and the bridge over Rock Creek was out: sure would have been nice to know that at the trailhead! By this time our animals were damn tired and going back up that awful trail simply wasn’t an option. We’d go ahead and deal with a water crossing when we got to it.

Luckily, the Forest Service had yet to pull up the old, rotting bridge decking so we gingerly tip-toed across, avoiding the worst parts. In just a mile, we reached the ford across the Minam River and continued to a likely camp site with lush grass and easy access to the river. We quickly unsaddled the stock and let them loose to roll and graze. Meanwhile, we set up camp, put up highlines and then stripped and washed in the bone-chilling water. Getting trail dust off and soaking arms with wasp stings sure felt good. That night, the sky was a-light with countless stars and gazing at them through our screen tent was a wonderful way to ease into a dreamless sleep.

Early next morning we broke camp, saddled animals and began following the main river trail. Once again, we found trail maintenance a joke but because the river bottom was flat, getting around windfalls was much easier. The Minam River is an absolute jewel with crystal clear water and abundant trout. Even during the worst August heat the river remains frigid due to excellent stream-side vegetation and abundant snow in winter that gradually releases moisture throughout spring and summer. If you visit, be sure to include a pack rod and some flies: you won’t be disappointed in your fishing experience here.

That night we bedded down in our old elk camp, bringing back years of wonderful memories: of icy ridges negotiated carefully as we followed elk sign into the high country; of big bulls packed out on mules and of cold nights with snow falling to make hunting even better the next day.

I’ve often wondered what stories women tell who don’t revel in the outdoors. Do they speak of stalking the perfect dress at the mall or tell tales of finding just the right nail polish? As I told a group of high school girls once, it takes no talent to shop. But that’s just my bias.

Telling tales of past hunts, of hair raising adventures you somehow survived in the backcountry and mountain memories full of good horses, warm sleeping bags during freezing nights and the clear, bold bugle of an elk are what make life worth living.