The following Op:Ed was published by the Colorado Springs Independent on 1/7/15

Our country has an incredible and unmatched protected public lands legacy that allows hunters, anglers, hikers, backpackers, outfitters, equestrians and others the opportunity to experience parts of our country as they were in the days of Lewis and Clark and, more recently, Theodore Roosevelt. One such area is Browns Canyon, a scenic and rugged region in Chaffee County between Salida and Buena Vista on the Arkansas River. 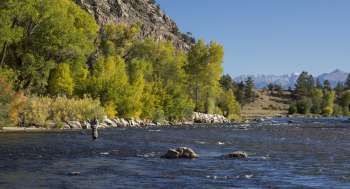 Fortunately, there's another option: a national monument designation. It was a hunter-conservationist (and Medal of Honor recipient), Teddy Roosevelt, who is responsible for much of the public lands heritage Americans enjoy today.

Protecting our American heritage is an act of patriotism. Our heritage helps us appreciate our country's special place in history. The Republicans who passed the Antiquities Act and the presidents who used the law understood that. So does President Obama.

About David Lien
share on
See other posts related to priority landscapes Colorado BHA
Get the latest news and stories, right to your inbox.
Search
Local Chapters