John has been working in the outdoor/hunting/fishing industry since he was 16, starting as an assistant (more like a pack mule dropping off equipment at various locations) for a fly fishing outfitter in the Swan Valley. While attending The University of Montana for degrees in Resource Conservation and Economics, he worked at a local hunting shop and was a river guide leading multi-day wilderness trips out of West Glacier in the summers. After graduating, he moved to southeast Alaska to help develop new fly fishing channels of business for various salmon fishing lodges.

He began to miss Montana too much, so he returned to Missoula and is active in Montana's hunting and fishing communities. John has firsthand experience watching smart policy protect and improve habitat, wildlife populations and opportunities for hunting and fishing. He is passionate about protecting backcountry, restoring degraded habitat and working with the state and private landowners to improve access.

Tom grew up in Iowa City and was introduced to bird hunting while cutting class with his high school principal’s son. Soon after guiding his first trip in the Boundary Waters Canoe Area Wilderness, he bought a solo canoe and explored the Quetico-Superior Region at every opportunity. After graduating from the University of Wisconsin Stevens Point with a degree in biology, Tom served as the Executive Director of Camp Olson YMCA for five years. In 1997 he became a founding board member and Co-Executive Director of North House Folk School in Grand Marais, Minnesota; he frequently travels back to teach classes and harvest wild rice.

With his wife Meagen and a pack of bird dogs, Tom moved to northwest Montana in 2002 to start a Nordic ski lodge with friends. He continues to work as a timber frame teacher, designer and builder, and is committed to sharing his passion for conservation and wild places. As an ardent big game and bird hunter, Tom frequently cannot be found in the forests, prairies and rimrock country of our nation’s public lands. 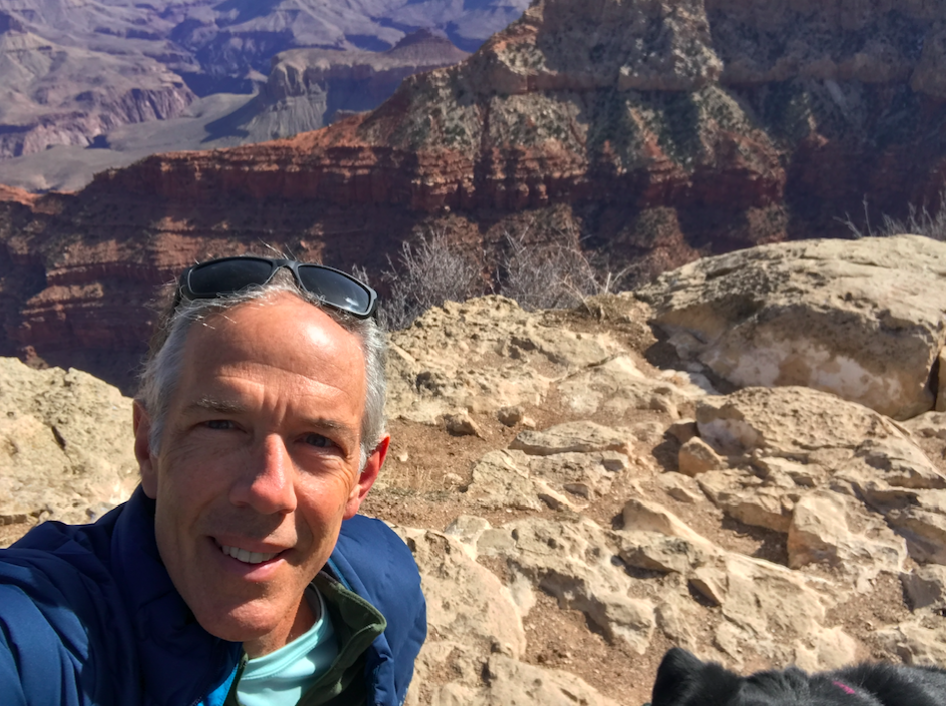 Lou is a lifetime- and legacy-member of Backcountry Hunters & Anglers who spends much of his time exploring Montana's wild places on foot and bicycle. One of his favorite activities is backpacking to secluded fishing holes or traversing public lands along the continental divide on two wheels.

Lou recently retired from a career in the publishing and software industries, and lives in Missoula with his wife, Lila, and two sons. He spends his time in the front country experimenting with wild game recipes, coddling two dogs, and when summer comes to Montana, tending bees and a rapidly expanding garden.

Returning to Montana from several years in Washington D.C. and Chicago has only increased Lou's passion to explore the outdoors and kindled a desire to pass along the backcountry experiences we cherish to future generations. 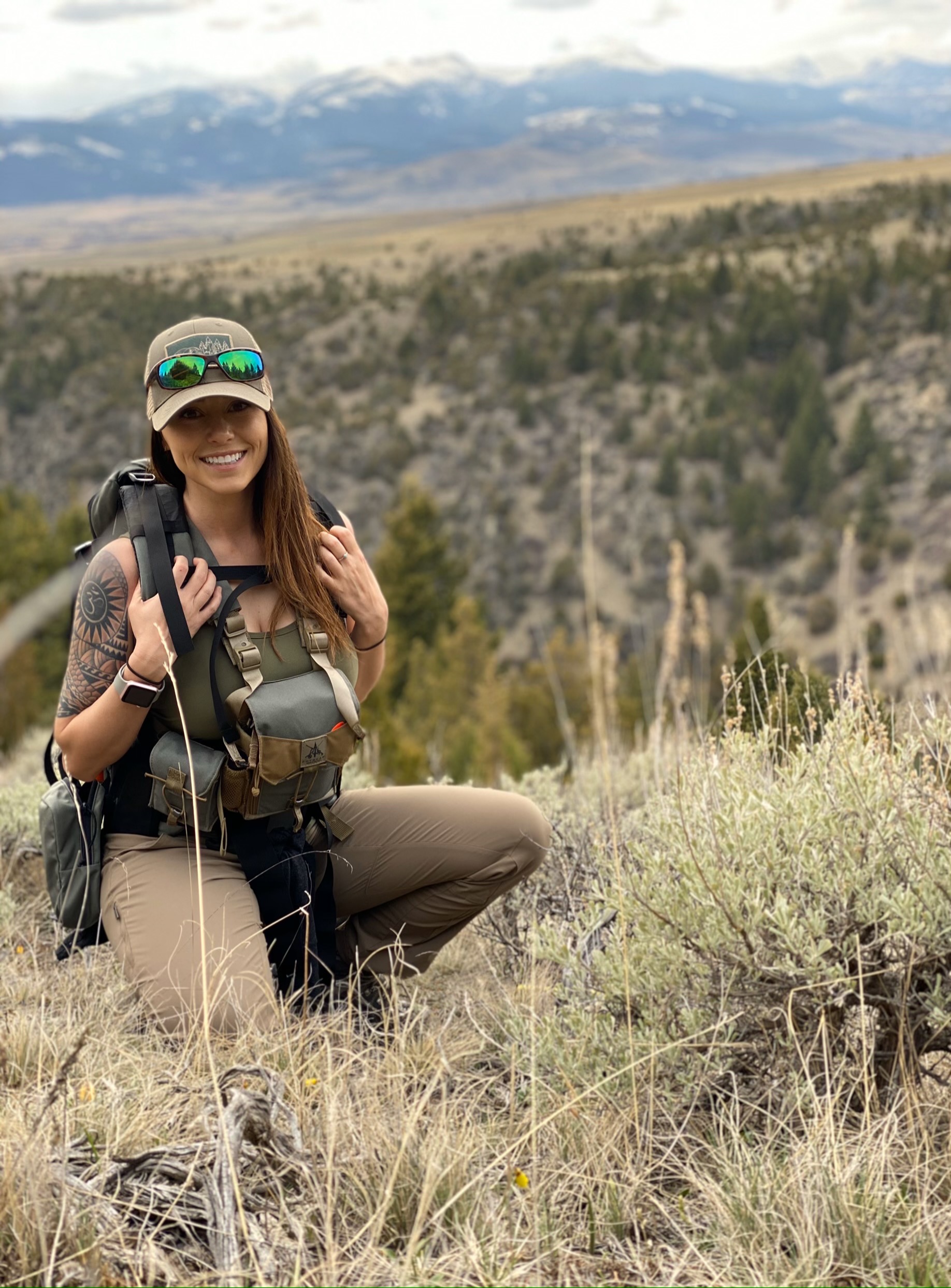 Born and raised Montana, Rachelle has spent the majority of her life outdoors. She comes from a family of avid hunters and anglers, which gave her an early appreciation for the land and water surrounding her because they provided both her main source of recreation and her main source of food. A lifelong mediocre fisherman, she was well into her adult years before she decided to dive into solo hunting and is proud to be a hybrid born-into-it/adult-onset hunter.

Being able to call just about every corner of Montana home at some point, has given her an appreciation for the vast array of landscapes and wildlife the state has to offer. As a mother of two, she strives to not only protect those places she’s grown to love, but to ensure the next generation is able to experience the same. Her dedication to conservation is truly derived from the desire to see the traditions of her family passed on for years to come.

When not meandering into the backcountry, she spends her time designing custom homes, writing, snapping photos, and even periodically finds time to build a custom fishing rod or two – all in the hopes of someday, actually catching the fish she chases.

Molly took her first paddle raft trip down the Grand Canyon when she was 13. Within a few years she was leading backpacking and rafting trips in Oregon. Molly believes that water binds all of us together, and she loves the fact that her two big brothers, her parents and she all live within the Columbia River System. When Molly wets a line in the Flathead near her now home in Columbia Falls, it reminds her of other Western rivers of her adolescence - the Clackamas, McKenzie, Rogue and Deschutes. She advocates to maintain and improve access to streams and waterways so future generations may tell river tales the way she recalls hers.

Molly has always wanted to do everything her older brothers did - including hucking cliffs on her skis - so naturally, as soon as she moved to Montana, she took up archery hunting and, shortly thereafter, she added a shotgun and rifle to her quiver. As a BHA Life Member, Molly enjoys immersing herself in issues that matter to sportsmen because she feels doing what's good for hunters and anglers is good for all public land owners. With a Master's degree in epidemiology, Molly writes evidence-based medical policy for a living, and is a proponent of community based participatory research as one way to inform public land and water policy. In her spare time, she trains for hunting season, guides fly-fisherman and takes fashion tips from her griffon, Winston. 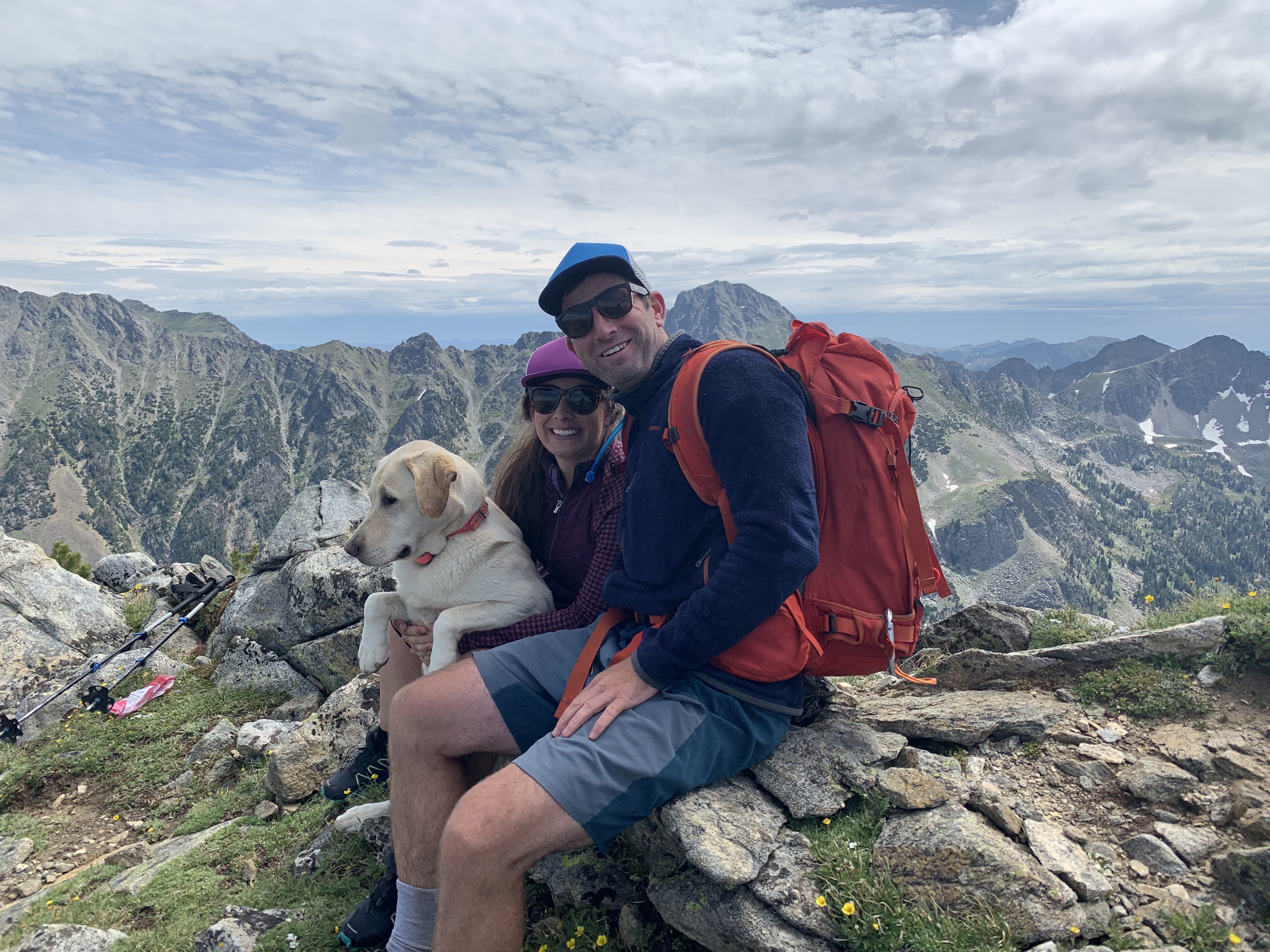 Graham grew up in the flatlands of the Midwest, without public lands or topography of interest. At 18, Graham moved to Missoula to pursue environmental journalism at the University of Montana. He spent the next decade guiding fly fishing trips in the Bob Marshall and Great Bear Wilderness areas. During the winters, Graham traveled extensively through the wild places of the world, exploring remote corners of the Himalays, Alps, Southeast Asia, New Zealand, and the Indo-Pacific, both high above sea level and below. In turn, these many nights spent under the stars revealed a new path. After receiving his Master’s in environmental studies at the University of Denver, Graham returned to UofM to pursue a natural resource law degree. While in law school Graham served as the Editor-in-Chief of the Public Land and Resources Law Review and extensively studied both the federal and state laws which guide resource management decisions.

After graduating, Graham married his beautiful wife Madison and settled back into life in Missoula where he now works for a small law firm specializing in water rights. In the warmer months, Graham can be found pursuing the next great river trip and stalking wild trout on the fly. Through his wife’s family Graham learned the upland tradition and has now added a new addiction and a new dog to the pack. And when the water freezes, Graham yearns to explore snowy silence on skis and spends his free time climbing and skiing the remote wilderness that defines the Northern Rockies in winter. 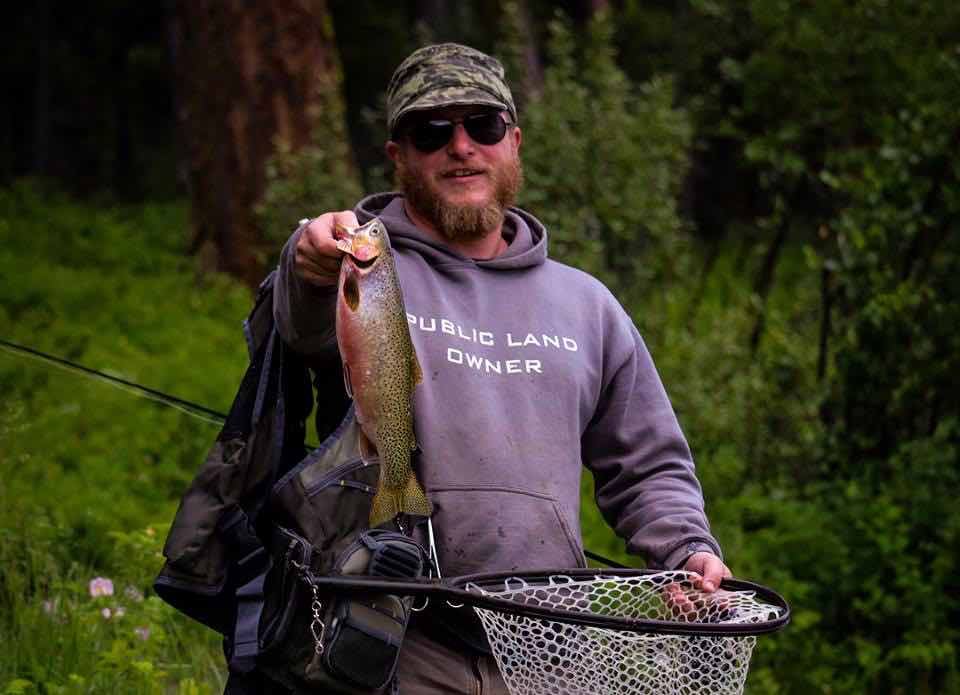 Dane was born in Bozeman then spent much of his childhood and post-college years bouncing around the Heartland, New England and the Gulf Coast of Florida. During this time, one constant remained: he must return to Montana. In 2015 the opportunity presented itself and Dane seized the opportunity, jumping in with both feet. The biggest draw for Dane had been the blue-ribbon trout streams of Montana, recalling childhood trips back to the Boulder River and float trips on the Big Hole and Yellowstone; but as an adult the greatest appeal became the large swaths of public lands in which he could chase elk, mule deer and mountain grouse. After discovering that the access to and use of our public lands and waters was threatened, Dane became active in advocating for these wild places. He became a BHA life member in 2016.

When Dane is not talking with people about the benefits of the public estate, he can be found making the most of the varied environments that Montana has to offer. You can often find him searching for an alpine lake full of uneducated trout, or foraging for mushrooms, berries and other wild edibles. Dane is at home in the mountains and will continue to fight to make sure these lands, waters and wildlife are here for generations to come. 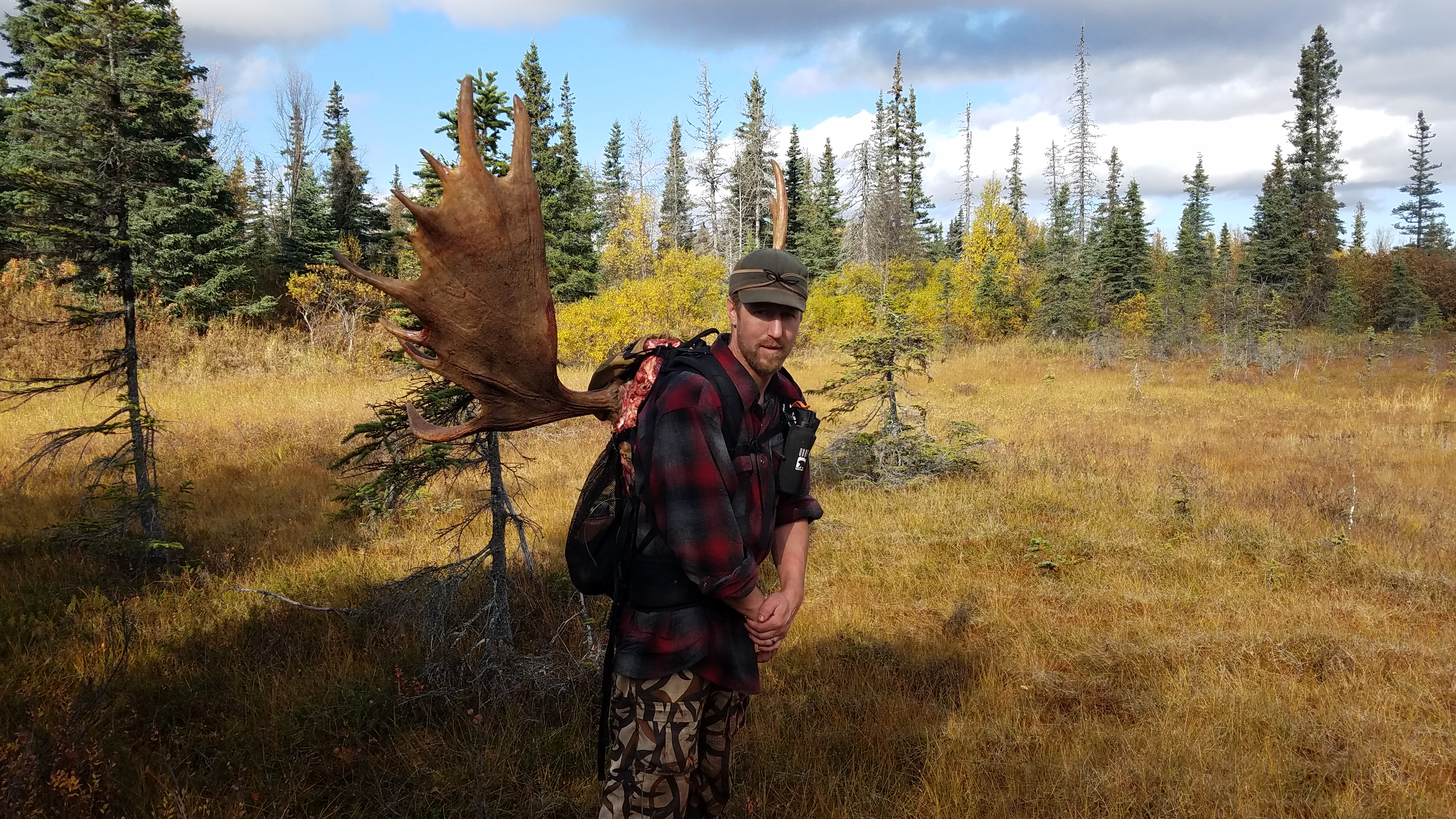 Born and raised in central Montana, Doug's travels around the country were enough to convince him that Montana truly is the Last Best Place. He lives in Lewistown with his family, and when he's not chasing elk with his stick bow he works for a structural steel fabricator.

For the last 15 or so years, when not hunting, Doug has volunteered with conservation organizations dedicated to preserving our outdoor heritage and protecting traditional uses. Specifically, his work has focused on public access to great elk habitat in central & eastern Montana. Doug is a former board member of the Traditional Bowhunters of Montana, Montana Bowhunters Association and a handful of FWP Committees. He's also currently on the board of the Lewistown Bowhunters Association and Central Montana Outdoors. Recently, Doug and his daughter, Emma, were featured on The Durfees, a film by Mission: Montana.

Matt grew up in small-town Michigan where he eked out an outdoorsman’s existence on the rural-urban interface of America’s heartland. At age 28, when Matt moved to Montana to pursue a Ph.D. in Ecology from MSU, he was stunned to learn just how much the wild, wild west was still a thing. From that time on, Matt’s abiding interest has been hunting and exploring Montana’s wild places. Naturally, Matt’s time in the forests and plains has fostered a desire to protect these places, as well as people’s right to enjoy them. When it comes to conservation and access, Matt is a no nonsense guy, and he is ready to fight the good fight.

After finishing his degree in 2004, Matt took his current job as a research ecologist for the USDA-ARS in Miles City, Montana, where he learned, paradoxically, eastern Montana is more western than western Montana. Other discoveries have been that good pack llamas are incredibly hearty, competent backcountry companions and 20-lb corgis, though hard to keep up with, make the best hunting partners.

Born and raised in Germany, Thomas fell in love with the great American outdoors early in his life. So much in fact that he left his home country and moved to the Rocky Mountain West for good. He became a wildlife biologist and worked for Montana Fish, Wildlife and Parks for two decades. While serving as conservation education bureau chief for FWP, Thomas facilitated the establishment of Montana WILD, wrote the state’s hunter education manual and chaired the committee for the International Hunter Education Association to establish U.S. hunter education standards, and worked on many fish and wildlife issues.

These days Thomas champions our outdoor heritage via non-profits and business. Thomas is the founding member of the Montana Outdoor Hall of Fame and serves on the board of Orion—The Hunter’s Institute, as well as Helena Hunters and Anglers. He founded the company Access WILD to provide backcountry adventures in the heart of Yellowstone National Park and other wild places using a fleet of hearty pack llamas.

Thomas holds two masters and a Ph.D. in Biology and Wildlife Biology from Universities in Germany and Montana. As faculty associate at Carroll College and Arizona State University, he teaches various courses on the science, ethics and practice of the human-nature connection and the notion of wildness. He lives in Helena with his wife and two teenagers, loves to hunt and fish all things wild and believes that America’s - and especially Montana’s - wild and public outdoor heritage is second to none.

share on
See other pages related to Montana Chapter Board Montana BHA
Get the latest news and stories, right to your inbox.
Search
Local Chapters