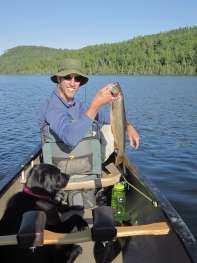 Minnesota Backcountry Hunters & Anglers (BHA)—The Sportsman's Voice for Our Wild Public Lands, Waters and Wildlife—are a grassroots group of sportsmen and women who are united by a passion to protect and conserve the public lands, forests, mountains, prairies, streams, and lakes that support our hunting and angling traditions.

Nationally, BHA has members in all 50 states and seeks to ensure America’s outdoor heritage in a natural setting, through education and work on behalf of clean water and wildlands. Founded in 2004, BHA is a 501c3 non-profit organization that works to conserve big, natural habitat and healthy rivers and streams. We work so our kids and grandkids are able to enjoy the high-quality hunting and fishing we cherish (www.backcountryhunters.org).

We understand that Enbridge Energy is proposing to build a new pipeline through northern Minnesota and the Mississippi Headwaters region, home to some of our state’s cleanest lakes, rivers, and streams. Apparently, Enbridge’s “preferred” route would result in hundreds of miles of new oil pipeline being built through and across a combination of lakes, rivers, streams and other wildlife habitat.

We also understand that an alternative route is available, which would follow existing Enbridge rights-of-way and avoid exposing additional northern Minnesota lands and waters to the risks associated with a new oil pipeline. Examples of these risks are included below:

One of the biggest threats to our hunting and angling heritage is unbalanced energy development that has been expedited across the West and Midwest, turning some of the last best public backcountry hunting and angling areas into industrial zones. While domestic and North American energy sources are important, such development needs to occur with conservation planning that seeks to minimize impacts on fish, wildlife, and our outdoor traditions.

Minnesota BHA is in favor of responsible energy development that is balanced with the needs of fish and wildlife, but that doesn’t appear to be the case with Enbridge’s proposed pipeline. Thank you for considering our boots-on-the-ground input regarding the Enbridge pipeline proposal.