By BHA Board Member, Jay Banta 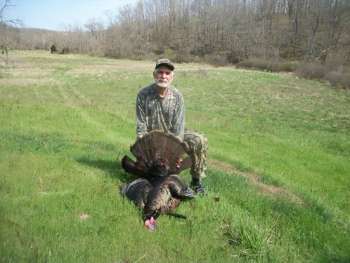 A clear and starry morning.  Just a hint of a breeze.  I leave our venerable 100 year old cabin in the Missouri Ozarks and huff and puff my way to the top of the adjacent ridge  From there an old logging road leads me South where I wait to listen.  I hear a barred owl calling in the distance and the quintessential sound of the Ozark nights, a whippoorwill call not far away.  Soon, the pre-dawn gobbles start - a gobble some 300 yards to the West causes me to set my decoys out right where I am at.  After getting settled against a massive white oak, I take out my slate call and do a quiet tree yelp...a strong gobble. He's heard me, but some 20 minutes later, I can tell the gobbler has flown down and is moving away from me.  Meanwhile two birds are gobbling South of me and they sound closer than they did on the roost.  I re-position on my tree and give them my best plaintive yelps on my trusty box call.  I get a double gobble and am hopeful.

These two gobblers would come within 200 yards and gobble each time I called, but they continued on their course west.  I finally decided I would let them go and then reposition.  After waiting about 45 minutes, I moved a good ½ miles west on another logging road and set up where it intersected with a large opening, placed my two decoys right in the road, then sat under a red cedar (my favorite hide) and stroked a few yelps on my box call.  I got an immediate gobble not 200 yard off to the South.  Since the gobble was to my hard left and I am a southpaw shooter, I quickly got up and repositioned against an oak tree on the other side of the road.  A second effort with the box call got an immediate gobble.  My shotgun was securely on my knee as I watched for any kind of movement.  20 minutes passed and no gobbler.  I made a few soft yelps with my diaphragm call and waited another 20 minutes, but still no bird.   I decided I needed to cut some distance so he would think I was coming to him.

I moved along the edge of the opening about 150 yards, leaving my decoys behind and slid up to a oak tree.  It was a steep and pretty wooly with younger woody vegetation and blackberry brambles.  I stroked the box call softly and waited, convinced the gobbler might have moved out.  Patience is always a virtue when spring turkey hunting and so I stayed put and watched intensely.  After 10 minutes or so a thunderous gobble erupted not 100 yards off.  I kept focused, scanning for movement but nothing.  I made a couple of soft yelps and kept focus.   After another 10 minutes or so, I saw the slightest movement to my right.  Looking hard, I saw something light brown moving and realized it was the back of a turkey fan.  The gobbler folded the fan and began walking my way on course to go behind a large oak at about 20 yards. As soon as he stepped behind the tree, I made the adjustment needed and as I did, I saw that there was a second gobble trailing him.  With only three gobbles in well over an hour, I had no idea!  The second gobbler saw the movement and immediate let out a loud “pert, pert!”  The lead bird stopped in his track and all I could see was his bright red head in a gap of about a foot between two trees.  Deciding it was now or never, I lined up and pulled the trigger.

The second gobbler took off running and then flew.  It was not until I could get to my feet that I could see that my target gobbler was down!  After over a hour of sitting perfectly still and  intensely scanning the woods, success was mine!  A nice three year old gobbler that weighed in at 19 lbs and had a 9” beard and 1” spurs.  Loading him in my vest, I began the victorious march back to the cabin and to share the tale with my fellow hunters.

About
share on
See other posts related to the campfire Backcountry Stories
Get the latest news and stories, right to your inbox.
Search
Local Chapters