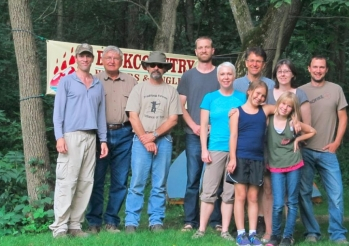 Jim helped start the Bluffland Whitetails Association in 1999 and is an accomplished turkey hunter (since it started in Minnesota), whitetail hunter (since 1957) and elk hunter (archery, muzzleloader, and rifle in five states since 1970). His passion for hunting, habitat and conservation are the same drive that has propelled BHA into the forefront of our nation’s sportsmen’s conservation efforts and are evident in his careful and sustained stewardship of his own lands. Thanks Jim!

Overall, it was a relaxed, mostly unstructured “get acquainted” weekend with some serious conversation and plenty of laughter both nights. And Saturday evening’s wild game cookout included feasting on elk burgers and moose steak with chanterelle mushrooms, compliments of Jordan Dahl and Jim Gerold.

The weather was generally sunny and warm all weekend, and the great location/venue has prompted us to (tentatively) plan on having MN BHA’s 2015 Rendezvous in the same location, same weekend (mark it on your calendars now!). Finally, thanks to MN BHA co-chair, Erik Jensen, for scouting/picking the location and his ongoing tireless efforts to promote and grow both BHA and hunting in general.

And as BHA founder Mike Beagle said, “We will continue to be a voice for core values of solitude, challenge, freedom and tradition so badly needed in the world where outdoor pursuits risk becoming more about selling products and technology instead of exercising skill and woodcraft. BHA is getting better and better. The best is yet to come.”