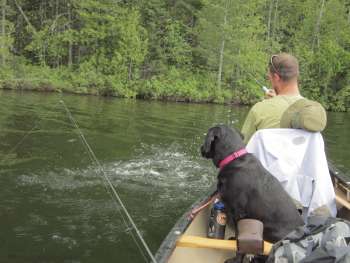 The following is an Op-Ed that was originally published in the Grand Rapids Herald-Review on 5/13/14.

In 1909 President Theodore Roosevelt established the Superior National Forest, which today encompasses some 3 million acres including 445,000 acres of surface water.[1] In total, Minnesota claims 10,000—some even say 14,000—lakes. The U.S. Fish and Wildlife Service reports that anglers spent $2.4 billion in Minnesota in 2011 supporting 35,000 state jobs.[2] Water, wetlands, rivers, lakes and streams are nearly synonymous with our state, particularly in northeastern Minnesota. What a special inheritance!

In the words of Minnesota DNR Commissioner, Tom Landwehr: “The canoe paddle in your hands dips into glassy water near Ely. A loon call breaks the quiet. Seeing the sunrise through aspen trees, your canoe loaded with fishing and camping gear, you realize … We are blessed in Minnesota to have an abundance of natural resources. Minnesotans love them as do our visitors. So do our children when we explore our state with family, and so do anglers.”[3]

But some among us are intent on squandering this inheritance. Foreign-owned sulfide mining conglomerates, like PolyMet, are proposing northeastern Minnesota copper and nickel mines, which extract metals from sulfide ore. Healthy fisheries, wildlife, world-class recreation and watersheds that provide clean drinking water are in jeopardy as a result.

Hunters and anglers and other wildlife advocates are particularly concerned about the impacts of sulfide mining. Groups like Trout Unlimited, the Backcountry Hunters & Anglers, and the Audubon Society have weighed in, sounding the alarm regarding the unavoidable impacts of sulfide mining, echoing what the Minnesota DNR Division of Fish and Wildlife said: “This increase in risk to water quality and fish habitat is a significant impact of the project.”[4]

That’s because when sulfides interact with oxygen (in our air) and water (in rain or snowmelt, for example), they create sulfuric acid—the same caustic substance used in car batteries. And sulfide mining in water-intensive areas has never been done without contaminating waterways and watersheds. Although mining companies say “reverse osmosis” technology will fix the problem, this technology has been around for decades. Reverse osmosis cannot even solve water pollution at Minnesota’s taconite mines.[5]

Sulfide mines have a long history of environmental contamination and have polluted an estimated 10,000 miles of our nation’s streams and rivers with acidic runoff. Sulfide mines in the United States, almost without exception, have left a legacy of toxic pollution behind.[6] That legacy is costing taxpayers billions in cleanup costs.[7] The EPA estimates that the cost of cleaning up all sulfide mining facilities is between $20 and $54 billion.[8]

However, we already know what the economic impacts will be. Eveleth is the size of Ely, and has Thunderbird mine within the boundaries of the city. The last year the state of Minnesota reported gross sales revenues, Eveleth was $41 million a year. Ely is $106 million a year. Eveleth relies on mining. Ely hasn’t had a mine since 1967. Ely’s economy, which is based fundamentally on the wilderness and a healthy national forest, would be displaced and replaced with what Eveleth has. Yes, sulfide mining would be bad for our economy.[10]

A Clean Water Act provision allows the EPA to “prohibit, restrict, deny, or withdraw” an area at risk of “unacceptable adverse effects” on water, fisheries, wildlife or recreation resources. The agency has used this process 13 times in recent decades, most recently in Alaska’s Bristol Bay to protect the bay’s salmon fishery, abundant wildlife populations, and Native communities from sulfide mining.[11]

The agency may be on track to make the same decision regarding proposed sulfide mines in northern Minnesota—20 years of sulfide mining jobs isn’t worth 2,000 years of poisoned waterways and watersheds that will cost the rest of us millions, and possibly billions, to clean up[12] Minnesota DNR Commissioner, Tom Landwehr, knows what’s at stake.

“Only in Minnesota do we have such a winning combination of lakes and rivers, public accesses, and fish species that make for an overwhelming abundance of quality fishing experiences … Only in Minnesota can you put in a canoe and continue that trip from Ely, paddling the Voyageurs’ canoe route through the border waters wilderness, and land at Grand Portage looking out to the largest freshwater lake in the world.”[13]

Conservation derives from the Latin conservare, meaning “to keep guard,” something Teddy Roosevelt did admirably. Today we have the opportunity to honor his legacy by protecting northern Minnesota’s Superior National Forest and other public lands and waterways from the watershed-ruining ravages of sulfide mining. Join us in defending Theodore Roosevelt’s legacy for future generations of hunters, anglers, and other outdoorsmen and women!