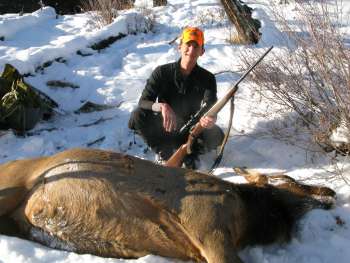 Minnesota Backcountry Hunters & Anglers (BHA) are a grassroots group of sportsmen and women who are united by a passion to protect and conserve the public lands, forests, mountains, prairies, streams, lakes and game that support our hunting and angling traditions.

BHA was founded around an Oregon campfire in 2004 by seven sportsmen and women and now has members in all 50 states, with 17 chapters across the country and Canada, including Minnesota, New York and Pennsylvania, and just about every Western state. Partly as a result of our western roots, we know that when a hunter dreams of a trophy elk thoughts run to frozen mornings deep in the Rocky Mountains. Minnesota seldom comes to mind, but that could (and should) change.[1] As you know, Minnesota’s native elk were originally distributed over most of the state, but were extirpated by the early l900s.[2]

This year Minnesota celebrates the 100th anniversary of its elk reintroduction, after the Legislature allotted $5,000 to rekindle the herd in 1913. And today there are three small elk herds totaling about 110 animals roaming in far northwestern Minnesota: one in Kittson County near Lancaster, another near the town of Grygla in Marshall County, and a third known as the Caribou-Vita herd in northern Kittson County that travels back and forth into southern Manitoba. The DNRs’ current elk management plan was established in 2009 and is set to expire in 2015.[3]

In recent years, there seems to have developed a higher level of social acceptance for elk in northern Minnesota. As a result, many residents in the northwest have started to push for a larger elk population and a new management plan that reflects the growing interest in seeing elk numbers increase. In February, for example, the Minnesota Deer Hunters Association (MDHA) announced that a group of residents had revitalized its Kittson County chapter after it had been inactive for several years. The chapter is focused on increasing elk numbers, managing them for long-term growth, and having a voice in future management plans.[4] And as the DNR noted in its 2009 Elk Management Plan, “Currently there is a desire by many Minnesota citizens to increase Minnesota’s elk herd.”[5]

We agree with the MDHA, and Rocky Mountain Elk Foundation (RMEF), along with local sportsmen and women and others, that sufficient habitat exists to support a larger elk herd in northern Minnesota, which would be a windfall to the hunting economy. In addition, businesses supported by non-hunters, such as wildlife watchers, would travel to the area to see and hear elk (the first time you hear a loon call, it’s like the first time you hear an elk bugle). In the long run, this would have a substantial economic effect in the border area of northwest Minnesota, for starters.[6]

According to the DNR’s 2009 Elk Management Plan: “Hunting and viewing generate real, but undetermined, economic returns for local communities and the state. Persons from outside of the elk range travel there to view and hunt the animals, and likely spend considerable resources in doing so. Elk have been highlighted as one of the species to see at several of the stops on the area’s Pine-to-Prairie Birding Trail. Shed antler hunting is also popular. The intrinsic value of maintaining elk on Minnesota’s landscape is significant. Elk are a large, charismatic species, and a valuable part of Minnesota’s natural history.”[7]

We envision a not-too-distant future when as many as 2,000 or even 3,000 elk wander across a much larger area of northern Minnesota than they do now. State RMEF leaders support an increase, as does the MDHA, which is holding a banquet in the northwest this fall to support the cause.[8] The RMEF, in particular, has been a leader in restoring elk herds across the country, and nationwide the RMEF has 210,000 members.

As explained by Star Tribune hunting/outdoors columnist Dennis Anderson, “About 6,000 of those members hail from Minnesota, spread among nearly 20 chapters. That the state has that many elk supporters but only about 120 of the animals within its borders speaks equally to Minnesota’s conservation ethic and the elk’s magnetism. Also, an elk hunter is an elk hunter regardless of his or her home address, and records indicate almost 7,000 Minnesotans apply to chase elk in the West each year.”[9]

Mark Johnson, MDHA executive director, believes elk have an unrealized value in Minnesota—the state has the potential for elk of a world-class caliber, and he would like to see them managed as more than a crop depredation liability. “The Legislature hasn’t allowed the state to manage elk as a big-game asset and that needs to change,” Johnson said. “The DNR has had its hands tied and they’ve been forced to manage elk as a pest, basically for the least acceptable number of elk possible.”[10]

Johnson added that in addition to a larger elk herd, he would like more public land and suitable habitat to become available for elk management. He believes that would keep the elk away from private farms and stored forage, such as baled hay, which is where elk often cause problems during the winter.[11]

Although there are currently opportunities for Minnesota sportsmen and women to hunt elk in the state, the small herd size makes drawing a tag extremely unlikely. Minnesota Statute 97B.515 authorizes a hunting season when the pre-calving population exceeds 20 animals.[12] During 2013, for example, a total of 23 licenses were available and 974 individuals or parties applied for the opportunity to hunt elk.[13]

Many northwest Minnesota residents are saying that the state’s herd should be grown in that region, much as other states outside the Rockies have expanded elk numbers/herds in recent years. Wisconsin (180 animals), Michigan, Arkansas and Pennsylvania are among places where elk—a native species, after all—have increased in number.[14] Our friends and neighbors in Wisconsin are actively working to both grow and expand the range of their elk herd.

Although native to Wisconsin, elk were wiped out in the state in the late 1800s. Reintroduction efforts failed until 1995, when 25 animals were transferred from a Michigan herd and released in the Chequamegon National Forest. The reintroduction was a joint effort of UW-Stevens Point, the RMEF and the Department of Natural Resources. Fund-raising efforts by the RMEF and private individuals raised more than $500,000 for the project.[15]

Each winter since, researchers have captured some of the animals, mostly to conduct health checks and attach or replace radio collars. But in a new strategy, a dozen elk were transferred from the main herd as part of an assisted dispersal (in 2012). The move is designed to expand the geographic distribution of the herd and reduce the vulnerability of the animals to wolf predation.[16]

The Rocky Mountain Elk Foundation contributed $1.8 million directly to the reintroduction effort and another $2.9 million for land purchases to protect wildlife habitat in Wisconsin elk range according to club officials (RMEF has 7,800 members in Wisconsin). The Wisconsin DNR has spent about $1.5 million.[17]

About $50,000 each biennium goes to UW-Stevens Point for research on the elk range.

Though the herd had increased about six times its original size in 16 years, other states’ reintroductions have far surpassed the Wisconsin herd’s growth. And the Wisconsin herd has stayed relatively close and concentrated near its original release site. According to the DNR, the herd utilizes less than 10% of the 1,112 square miles of the Chequamegon-Nicolet National Forest designated as elk range.[18]

That’s one of the reasons the Wis. DNR decided to conduct the assisted dispersals. During 2011 they started efforts to create a “Moose Lake” herd, followed by (in 2012) a “Moose River” herd, also on Chequamegon-Nicolet National Forest land. Ten of the 12 elk moved during 2011 to Moose Lake were alive in 2012.[19]

Michigan restarted its elk population with just seven animals in 1918, a herd that since has grown to more than 900, and it has been well accepted by both landowners and sportsmen in the state, including deer hunters. According to elk experts, elk and deer have different diets during the spring, summer and fall. While the diet overlaps during the winter, even then elk and deer generally forage in different areas.[21]

The bull elk is an enduring symbol of wild places and wide-open spaces. It’s arguably the most impressive antlered animal in the world. The long, sweeping beams and high, curving tines of a mature “6x6” give the elk a majestic aura. And elk truly are “big game,” with some bulls approaching 1,000 pounds. A single elk could feed a frontier family for a winter, and the soaring antlers have claimed the place of honor over many mantles.[22]

As the DNR stated in its 2009 Elk Management Plan, “The long term vision (2015–2035) is to enhance the size and range extent of Minnesota’s elk population.”[23] We agree that it’s time more Minnesotans to experience these grand animals, again. And we fully support (like the MDHA and RMEF) the growth and expansion of Minnesota’s wild elk herd. Please take our comments into consideration and include them in the public record regarding this issue. Thank you for your consideration.

[24] David Lien is the author of Age-Old Quests II: Hunting, Climbing & Trekking (http://outskirtspress.com/AgeOldQuestsII/) and was recently recognized by Field & Stream as a “Hero of Conservation.” For additional information see: http://www.ammoland.com/2014/07/david-a-lien-recognized-by-field-stream-as-a-hero-of-conservation/#