“Leave it as it is. The ages have been at work on it and man can only mar it.”– Theodore Roosevelt 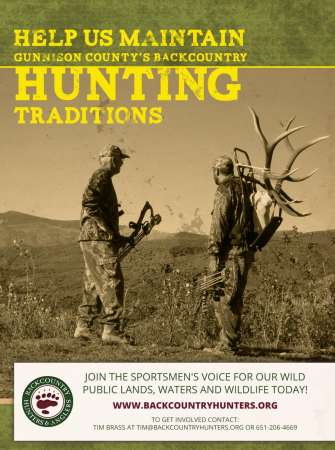 The secret’s been out for quite some time, Gunnison County is a sportsmen’s paradise, boasting some of the best backcountry hunting and fishing in the state of Colorado and arguably, the country.  With numerous storied wilderness areas, miles-upon-miles of incredible and publicly accessible cold water fishing and plenty of wide-open public land to explore, sportsmen have good reason to work towards protecting the wild public lands and waters that make Gunnison County what it is.

Named by the Boone & Crocket Club as one of the top 125 counties for trophy hunting of all-time (68th), there’s good reason that many people wait years to hunt this storied and undeveloped landscape.  Until the extremely controversial “spider bull” was killed recently, Gunnison County held the world record typical elk, taken in what is now the Raggeds Wilderness in 1899.  While Gunnison’s hunting fame is centered on elk and deer, the area also offers great hunting for bighorn sheep, black bear, mountain lion, waterfowl and grouse.

In addition to exceptional big game hunting, Gunnison County is known by fishermen for its famed cold water fisheries. From the Taylor and the Gunnison to the many small untouched backcountry streams, if you haven’t fished Gunnison County, it’s time to add it to the bucket list.

A big part of what makes Gunnison County such a major hunting and fishing destination is the fact that it remains largely as it has been for generations of sportsmen and women before us – wild and relatively free from development.   Where large-scale housing development is common throughout most other mountainous recreation destinations in Colorado, and oil and gas development widespread in many others, that vast majority of Gunnison County remains intact.   With 80 percent of the county in public ownership, sportsmen have unfettered access to roam free in pursuit of fish and game.

Those who have been haunted by a bellowing bull, bugling deep within the West Elks Wilderness, or watched a wild Colorado Cutthroat Trout rise to a dry fly from the Ragged’s crystal clear waters understand why we need to work towards keeping this country as it is.  Through a community-based public land conservation effort aimed at protecting high-value roadless and wintering habitat within the county, Backcountry Hunters & Anglers is working to maintain this special place?  This effort to develop long-term land management solutions that safeguard some the county’s finest fish and wildlife habitat is gaining traction on numerous fronts.

From the woods to the local tavern, people are talking.  Thankfully, Colorado Senator, Michael Bennet has taken note and expressed a formal interest in working with community members to move the process forward.

It is our hope that through hard work and boots-on-the-ground efforts from sportsmen and many other public land users that we can ultimately work towards developing legislation that will safeguard the sporting traditions and wild landscape that Gunnison County is known for.  If you hunt or fish Gunnison County and would like to more involved with this effort, please contact Tim Brass.

About Colorado BHA
share on
See other posts related to habitat priority landscapes Colorado Issues gunnison
Get the latest news and stories, right to your inbox.
Search
Local Chapters