The John Day River is born of the snows in the high Blue Mountains in northeastern Oregon and flows northwest to the Columbia River through some of America’s most isolated and intact sagebrush steppe landscapes. The John Day, named after a fur trapper and trader who was robbed, stripped naked and released by Native Americans at the river’s mouth in 1812, is an envelope of pure clear water in one of the most arid parts of the inland northwest, a lifegiving artery replete with native steelhead, a spring run of wild Chinook salmon, bull trout, Columbia redband trout, smallmouth bass, and a host of lesser known or sought native species. The rugged wildlands and canyons of the river – it is deeply incised into the Columbia Plateau – are home to Oregon’s largest population of bighorn sheep, thriving herds of elk and mule deer and rare ferruginous hawks, as well as the tiny grasshopper sparrow and the sagebrush lizard, unsung species holding out here, in the back of beyond.

The John Day, 281 miles long from headwaters to the Columbia, is Oregon’s longest undammed river and a crucial source for irrigation for farmers downstream. It offers some of America’s most deservedly popular float trips on its 70 miles of designated Wild and Scenic River and is the center for every kind of outdoor recreation, from hunting and fishing to horseback trips, epic hikes and mountain biking. The lower canyons, towering columns of mahogany-colored basalt, are some of the most spectacular in the West. But until very recently, the only way to access them, and to access over 78,000 acres of public land managed by the Bureau of Land Management, was to take a boat downriver on an extended float trip. Using Land and Water Conservation Fund dollars, the Western Rivers Conservancy was able to purchase the Rattray Ranch, which has a paved road access to the river and will allow the public a reliable point of access to the river – the single point of access along an entire 70 mile stretch – and to the 78,000 acres of previously blocked-off BLM lands, which are of wilderness quality.

The purchase of the Rattray Ranch, and the transfer of the lands into public ownership, is about more than just public access. The Thirtymile Creek is one of the most important coldwater tributaries of the John Day and a crucial spawning stream for one of the river’s strongest steelhead runs. The Thirtymile flows from The Thirtymile Wilderness Study Area on BLM lands and through the Rattray Ranch. Over the years of use, the Thirtymile has become degraded, shallower, warmer, and with less healthy spawning areas. The plan is to carefully restore the creek, increasing the flows of cold and clean water into the John Day, and naturally rebuild the steelhead and other native fish populations throughout the entire watershed. 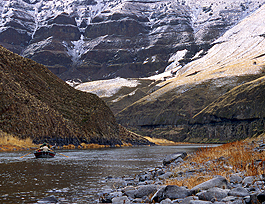 About Hal Herring
share on
See other posts related to access lwcf Oregon Issues
Get the latest news and stories, right to your inbox.
Search
Local Chapters