LT in NC: The Week of Land

What a week we had with BHA President and CEO Land Tawney! Tremendous gratitude to all who came out to the events in Raleigh, Charlotte, and Asheville and extra special thanks to the volunteers that made those events happen. Big time appreciation also goes to the individuals and organizations that opened their land, offices, shops, airplanes, boats, breweries and trucks to us while we toured Land over, in, on and around the great state of North Carolina. This was Land’s first visit to NC, and by the time he left, he was already scheming out a plan to get his family back this way for vacation next year. Here's a quick recap of an event-filled week in the Tar Heel State.

Land landed in Raleigh-Durham late on Tuesday. The next morning BHA North American board member Eddie Nickens and North Carolina Chapter Chapter Chair Luke Weingarten were ushering him out of the lobby, tossing his bags in the truck, and priming his excitement for what he was about to see. 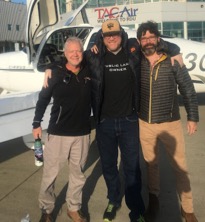 Through an incredible donation of time and resources, Ben Whitley of Whitley Law Firm took Land, Eddie and Luke on an incredible three-hour flyover of North Carolina’s Coastal Plain. Heading due east from Raleigh, the flight soon brought them across the Tar River and synced up with the snaking curves of the Roanoke all the way to Albemarle Sound and over Alligator River National Wildlife Refuge. The pilot couldn’t help but buzz that 4-seater Cirrus over the Wright Brothers Monument at Kitty Hawk before swinging south along our Outer Banks. And the hits just kept coming; we flew over Oregon Inlet, Pea Island National Wildlife Refuge, Cape Hatteras National Seashore (seeing the V of trucks at the vertex was a highlight!), Ocracoke and Portsmouth.

It was at that point something really special happened when we unexpectedly got clearance to continue our flight path all the way to Cape Lookout—air space that is usually restricted. After swinging around the hook at Cape Lookout National Seashore we then made a pit stop in Beaufort before returning to Raleigh via a route that took us over the Croatan National Forest and up the Neuse River. The flight was astounding and kindled that sense of awe and aspiration true backcountry inspires.

Wednesday continued with a visit to Sen. Thom Tillis's office, where we had a fantastic meeting with his state director. In addition to highlighting the chapter’s accomplishments and broad membership, we also advocated for crucial federal programs like LWCF and RAWA as well as state issues important to North Carolina’s sportsmen and women, including the health of marine fisheries, access to our eastern waters, public mountain trout waters, Sunday hunting, forest management for wildlife habitat, and the second phase of the ALCOA lands acquisition (more on that last one in a moment). From there we headed off to a pint night at Trophy on Maywood. About 50 BHA members were on deck that night, all sharing stories, clinking glasses, and fertilizing NC BHA's grassroots with potent conservation energy. 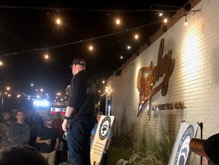 Luke snagged Land from Casa de Nickens early Thursday morning and they headed west meet up with an A-team from Three Rivers Land Trust. On a well-used duck boat, Land was able to tour the Tuckertown Reservoir, which brings us back to ALCOA. Eighty percent of North Carolina's population lives within a 100-mile radius of this property, and many across the state are working very hard to secure this land and water as hunting, fishing and outdoor recreational acreage for our residents and visitors in perpetuity. We were able to get Land out of the boat for a spell, and while neither he nor Luke were able to turn up a squirrel, it sure was fun to give it a try on the very ground a teenage Daniel Boone likely suffered the same frustration. The team concluded with a meeting on a rattlesnake hibernaculum — fortunately they'd gone to bed already — and then the crew each enjoyed a can of Public Land Owner Pale Ale, which Land brought all the way from Montana. 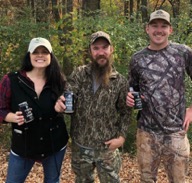 Next was a meetup with Land's old friends and colleagues, Tim Gestwicki, Manley Fuller and the incomparable Richard Mode at the North Carolina Wildlife Federation office in Charlotte. Luke and Land were able to further solidify an already invaluable relationship the NCWF, and the opportunities for future cooperation and support between our organizations are significant. From there it was off to a dinner that was as full of stories as it was food and onto a pint night at Olde Mecklenburg Brewery that was as energized as they come.

Land began Friday bright and early with a 5:30 a.m. pickup by NC Board Member Mike Neiduski, making the run to the mountains of western North Carolina for the remainder of his visit. There they met NC BHA's Vice Chair and Mountains Regional Director Tyler Ross and members of the Appalachian Highlands Chapter of the Ruffed Grouse Society for a boots-on-the-ground introduction to chasing the ghosts of mountain grouse. Dogs were run, elevation was gained and lost, grit ruled the day, but, alas, no grouse were found. The beauty of WNC showing bright in the midday sun stole the show. Conservation and collaboration dominated the conversation as Land took in the diversity of opportunity available to us all as Public Land Owners of North Carolina.

That evening, the NC board of directors and leaders from the Winston-Salem, Asheville and Charlotte councils, along with other select guests and diehard BHA members, convened atop a remote location in the shadow of the Blue Ridge Parkway where camp was made, a bonfire lit, and a plethora of wild game prepared, including black bear, whitetail, mule deer, elk, trout, moose and pronghorn. The fire and fellowship burned well into the night. 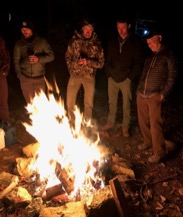 Come Saturday, Land and a few members of the board met up with the Blue Ridge Parkway's chief ranger and some filmmakers for Project Upland at the Cradle of Forestry in Pisgah National Forest. Afterward, we stopped by OGRE Outdoors' shop where Land fueled up on Bojangle's and custom rigs before heading to New Belgium Brewing for some time on the lawn with members out Asheville way. That evening, we moved into the Brewhouse for an encore showing of the Public Land Owner Film Fest. The audience was entertained and inspired, brought to tears and belly laughs by the varied compilation of films created by fellow BHA members. And then, his sea-to-mountains journey came to a close with a rousing address to the audience and open-forum Q&A.

In sum, it was a BIG time with the big man. NC BHA is grateful to have had the opportunity to showcase our state and make crystal clear the power and electricity that is BHA in NC.

About Luke Weingarten
share on
See other posts related to North Carolina News
Get the latest news and stories, right to your inbox.
Search
Local Chapters