As areas urbanize and private lands continue to be leased-up by those willing to pay the highest dollar, public land access is becoming increasingly important for sportsmen throughout the 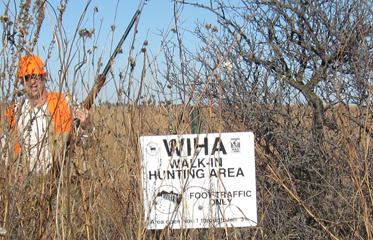 U.S. The importance of access is backed-up by a recent study that found lack of hunting access to be the number one reason that people stopped hunting. Virtually all sportsmen agree access is important.

While there is some unfortunate disagreement amongst sportsmen groups about what the term “access” means (some still put weight in an argument that roadless lands are inaccessible lands), there’s little disagreement that public lands which are “locked-up” by private lands or development should be made accessible to sportsmen. Nationwide, more than 50 percent of hunters depend on public land, while in many Western states such as Colorado, the percentage of hunters who have used public lands in the past 10 years tops 90 percent. Yet, as important as public land access is, an estimated 35 million acres of BLM and Forest Service land have inadequate access (from 2004 report to House Committee on Appropriations).

When the question was posed to BHA members “Have you ever tried to hunt or fish public lands that turned out to be inaccessible or locked-up by private lands? If so, where?” BHA members had little trouble identifying such places. Among these areas were:

Fortunately, congressional leadership is working on carefully crafted legislation which will ensure future access to these public lands. While some recent attempts to do so have inappropriately focused on providing motorized access to roadless lands, BHA supports other, more balanced pro-access, pro-hunting attempts such as the Hunt Act.

share on
See other posts related to access keepitpublic
Get the latest news and stories, right to your inbox.
Search
Local Chapters