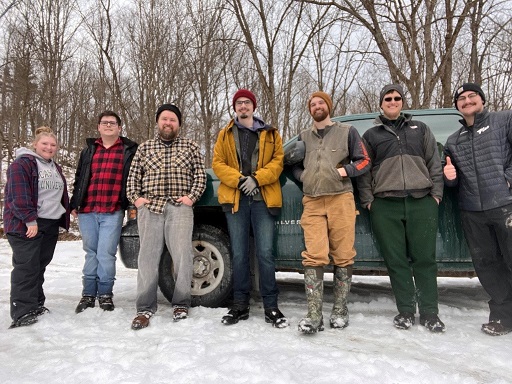 The five-lined skink, a threatened species in Vermont, is the only lizard species in the state. Unfortunately, this rare cold-blooded vertebrate is only reported to exist in a few towns in the state because Vermont sits on the northernmost part of its range.

The project took place in a known habitat for the lizard who spends its winters in cracks along the cliff of Lake Champlain. This particular area is heavily shaded mainly due to cedar cover which negatively affects the lizard's ability to sun itself. Being a cold-blooded species, the five-lined skink needs to spend part of its day warming itself in the sun to increase its body temperature or it risks dying.

The original goal of this project was to remove cedars along the cliff, cutting them down and placing them in the water below to help various turtle species that use downed trees as aquatic habitat in Lake Champlain. The lowered trees would act as a sunning spot for turtles, increasing the project's value. However, this was unable to take place because the cedars along the cliff were 200 years old, which meant cutting them down would have an adverse impact on other species than the lizards or the turtles. 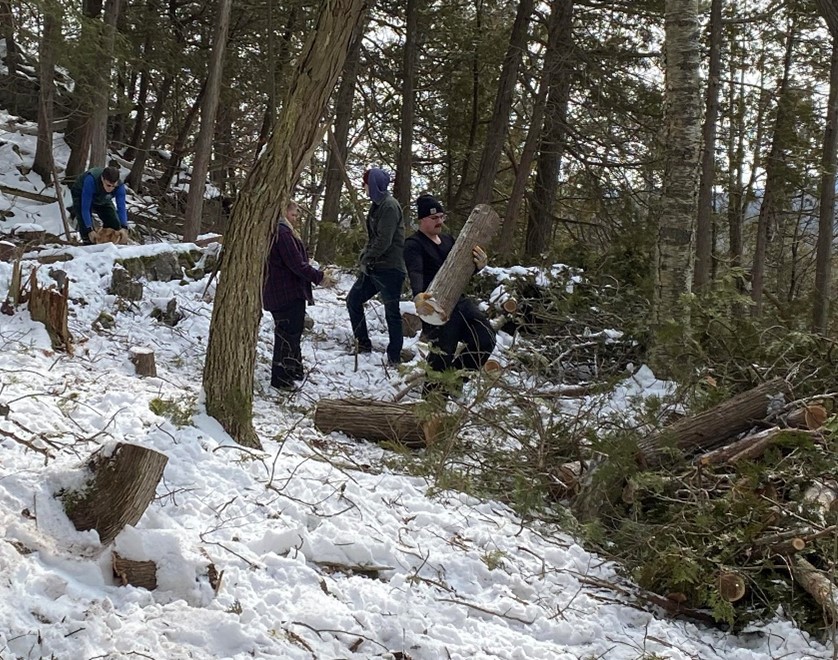 When managing ecosystems, there is always a give and take: what benefits one species can harm another. However, balance can be achieved--cedars deemed unhealthy would be removed. Other trees that weren’t quite as old were also removed to allow needed sunlight to hit the forest floor. This is where Castleton's Backcountry Hunters & Anglers came into the project. We helped take the downed trees and turn them in to brush pile--two things helping the five-lined skink.

The five-lined skink is a small lizard, so it was essential to move even the smallest branch and bits of brush in the habitat to allow the lizard the opportunity to get full sun. The second benefit was creating a rodent hotel, as rodents are a main food source for reptiles like the five-lined skink. The brush piles provide the five-lined skink and many snake species, including those that are rare and threatened, a fantastic foraging buffet.

While we were piling brush a bush plane flew through the narrow cliffs, hovering just above the lake as we were working. And because many hands make light work, we finished the project earlier than expected and were able to get a tree felling demo from one of the State Foresters. We enjoyed some hot chocolate and grilled up some venison burgers back at the parking lot to thank the volunteers that came out to help. We would like to extend a special thanks to Luke Groff (Vermont Fish and Wildlife Herpetologist) and Ethan Crumley (Vermont Forest, Parks, and Recreation Forester), for providing the opportunity for us to help work on this vital habitat project.

Editor's Note: The five-lined skink is listed as "threatened" in the state of Vermont. Backcountry Hunters & Anglers is working to advance legislation that would dedicate $1.4 billion annually to help state and tribal fish and wildlife management agencies proactively manage at-risk species like the five-lined skink to prevent them from being added to the federal list of threatened and endangered species. While not all at-risk species are game species, they do share the same habitat with critical game animals like mallards, mule deer, pronghorn and wild trout. Improving habitat for one species benefits all of them, including wild game.

Join us in urging your lawmakers to support and cosponsor the Recovering America’s Wildlife Act!