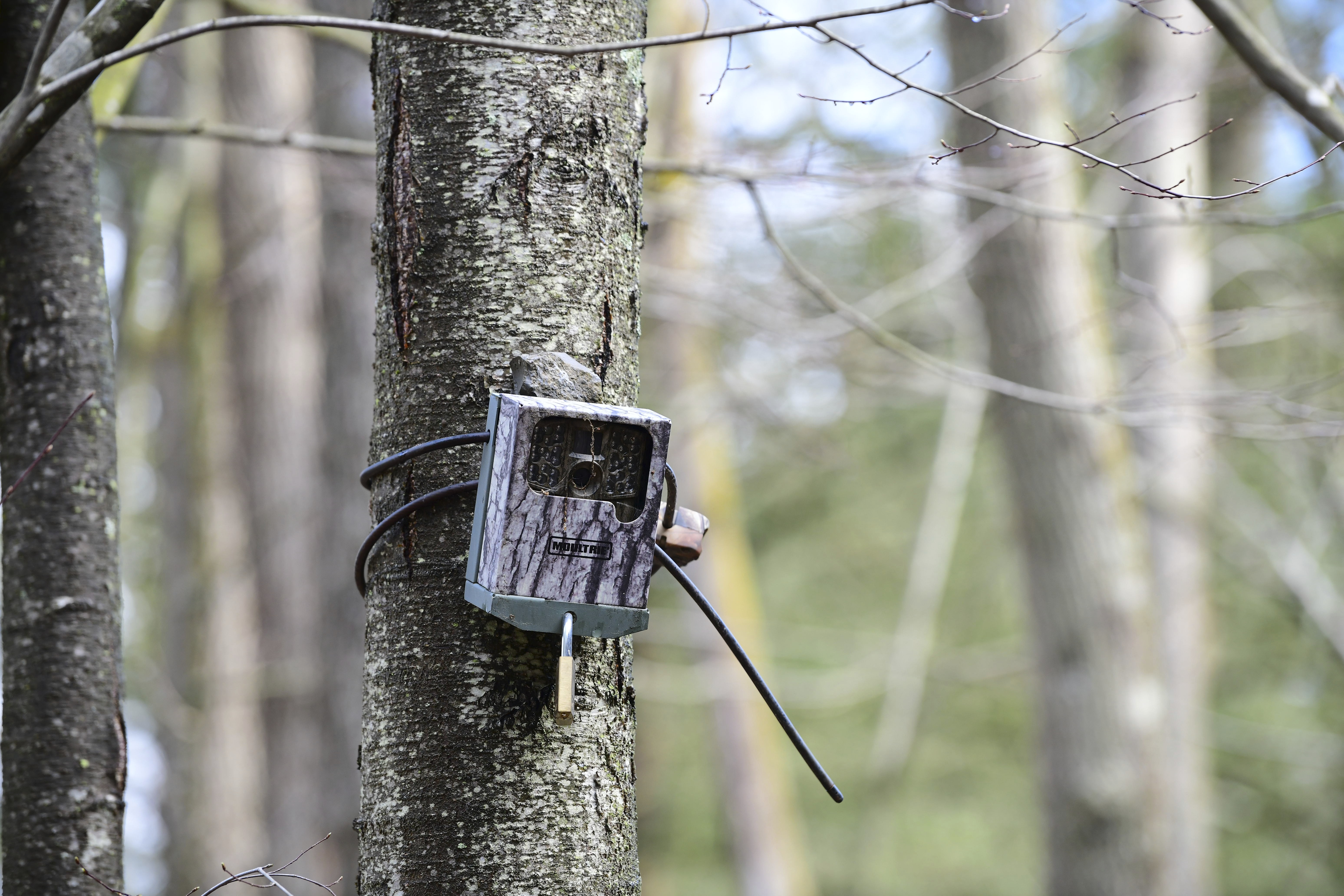 Photo by Barry and Cathy Beck

On an October morning a decade or so ago, I was hunting woodcock in an abandoned orchard. A flight had come in and, in less than an hour, I collected my three-bird limit. That evening I got a call from an acquaintance, a deer hunter, who hunts the same orchard. He asked how I did and if I’d seen evidence of deer. How, I asked, had he known I had been hunting there that morning? He said he saw me on the trail camera he’d placed in cover. I was amused.

It’s now common to see cameras in the woods I hunt, and it’s interesting to hear from friends who share the pictures of animals their cameras record. I’m primarily a bird hunter so field cameras are of no use, though I have thought it would be neat to position a camera near a grouse drumming log to get some pictures of the showoff. It’s clear that a deer hunter can make good use of a game camera or two. It’s also clear that the technology is a useful tool for wildlife researchers. More broadly, I know public school and college teachers who have their students use remote cameras to record animal activities in their backyards and neighborhoods. Anything that gets young people outdoors and engaged in appreciating wildlife is a good thing.

But there is a downside that hunters in particular must face, and it’s gotten more acute with the development of so-called “live action game cameras,” units that record and transmit images in real time to a smart phone or other hand-held device. Does this technology tilt the playing field too far in favor of the hunter? Are you really hunting if your phone notifies you when a buck has stepped into the food plot?

This is not a new problem. Philosophers in ancient Greece worried about our ability to take unfair advantage over animals. Jose Ortega y Gassett praised hunters who deliberately handicapped themselves to make the contest between hunter and hunted a challenge. Aldo Leopold worried that “gadgets” would corrupt hunting: Even if the gadgets didn’t improve hunters’ chances of making a kill, they placed too much emphasis on the kill at the expense of the challenge of the chase. Theodore Roosevelt was characteristically blunt on the same subject: “The rich people, who are content to buy what they have not the skill to get by their own exertions – these are the men who are the real enemies of game.”

TR was familiar with both riches and exertion, but today, technology does not require inherited wealth. We have to ask ourselves if we want to make hunting easier, and perhaps more importantly, do we want to make success, defined as a kill, more certain? In any given year, no more than 20 percent of all deer and elk hunters harvest their animals. That they keep hunting, year in and year out, suggests that they are hunting for complex reasons that go far beyond the desire to kill: Failing to do so in any given year only heightens the expectations for next year.

Available technology now makes it possible for hunters to reduce the time they otherwise would have to invest in preseason scouting, even time afield during the season. Game cameras have become inexpensive, enabling hunters to check the movement of game in areas they intend to hunt without investing precious hours with boots on the ground. It’s easy to see how substituting technology for the laborious process of acquiring intimate knowledge of game is tempting, especially given the fact that for most hunters, there are many claims on “free” time.

At this writing (February 2018) only three states have banned live action cameras in season (Montana requires that all cameras be removed during the hunting season.) A few more are considering regulations. This is an issue that will become more pressing as cameras get more sophisticated. And then there are camera-equipped drones that raise even knottier ethical questions. Sixteen states have banned drones in season, thanks in part to advocacy by BHA.

We are facing the wicked problem of the “slippery slope”: Where do we draw the line between the acceptable and the unacceptable? Is the line purely a personal preference or ought there be regulations that say cameras are OK for preseason scouting but not during the hunting season? Ought we draw a line between conventional and live action cameras? And drones?

At bottom, the question is one of fair chase. Do live action cameras unacceptably tilt the playing field? There’s room for debate, but one thing is certain: The price of technology will go down and the ethical costs associated with accepting increasingly sophisticated electronic mediation between hunter and hunted will go up.

Jan is a board member of Orion: The Hunters’ Institute and a life member of BHA. A retired professor, he splits his time between western Massachusetts and northern California.

share on
See other posts related to the campfire backcountry journal fair chase
Get the latest news and stories, right to your inbox.
Search
Local Chapters