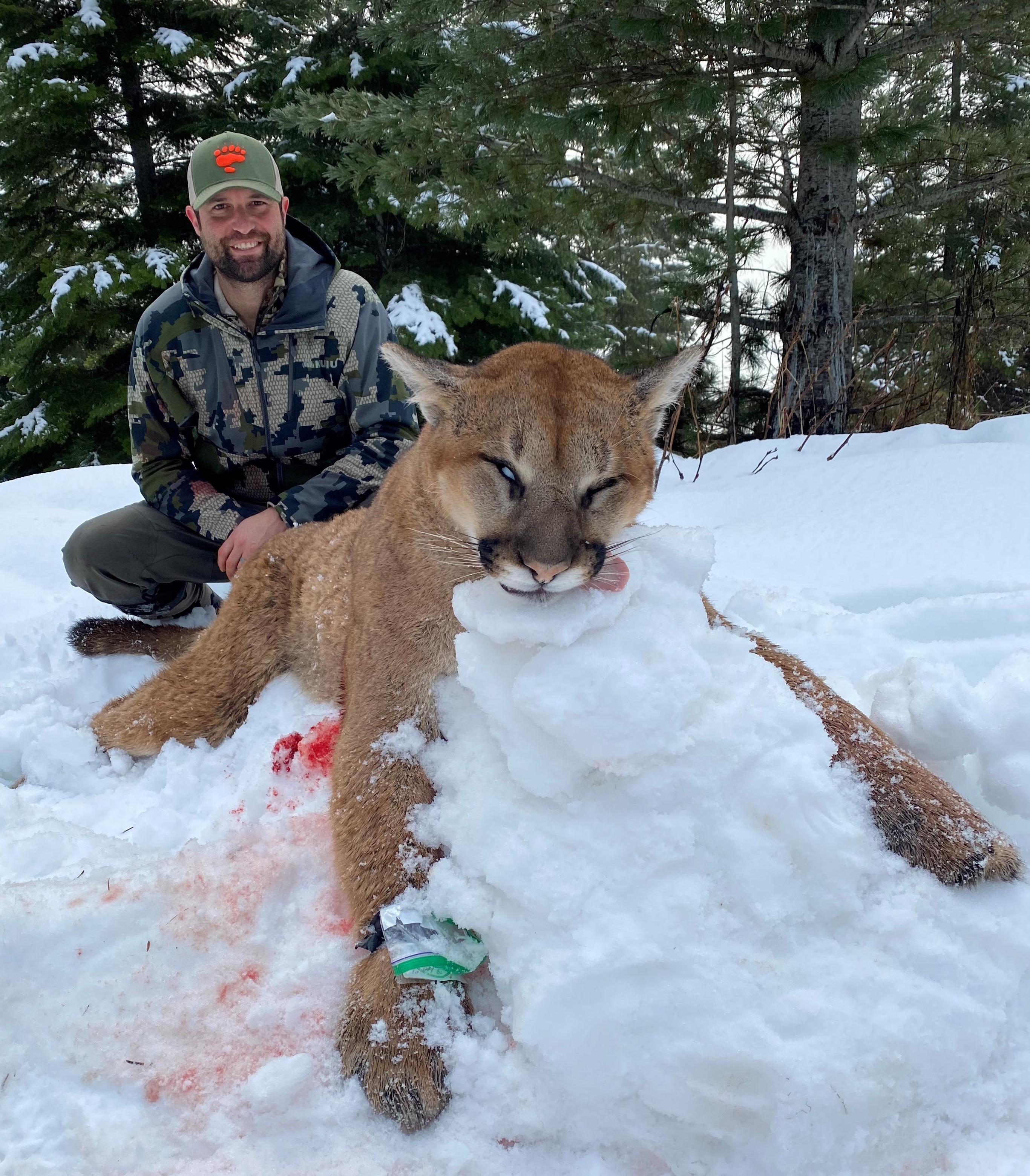 I waited a very long time for a chance at a mountain lion. From first hearing about a hunt like this and then learning about it and planning and saving and gearing up for it, years went by. Early this January, after already so much effort, my chance finally came.

Some of you know exactly what these pictures represent; how special they are. For others, perhaps they are surprising or difficult to understand. Either way, my tale of this hunting adventure is below. If you read all the way to the end, you’ll find a few points as to why cougars are and can be hunted.

Coming into the mountain lion hunt, I was most excited to experience two things: hunting with hounds for the first time and sharing ground again with predators.

We started the trip with a 40-mile snowmobile ride to get deep into the backcountry of Idaho. We packed 100 gallons of gas, enough food for 5 guys for 7 days, and all the other essentials to hunt for a week forty miles from the truck high in the snowy mountains.

For a rookie snowmobile driver, Day 1 was an adventure in and of itself. Getting used to the machine and its quirks was no small task and even pitched me into ground a time or two.  The consolation prize for those falls was the opportunity to hold still a second and take in the incredible views Idaho has to offer.  It is astounding country.

We started Day 2 with an hour of hard rainfall then struck out into many of the north-facing hillsides. We found cougar tracks just a few hundred yards from camp and covered the mountainside working to put the pieces together. Ultimately, we found four different sets including one we thought could be from an 8-foot cat.  As light faded, we ended the day formulating a game plan to set out on the big cat at daybreak. Overnight, I dreamt of hounds and lions as the rain from earlier that day froze hard on the mountain.

At first light, we put the dogs on the track and the search began again. We found where he had tried to cross the river, but the ice wasn’t thick enough and he fell through. After trying to swim across the partially frozen river, he gave up and returned to where he started.

The dogs, T and Sir, worked those tracks for over an hour. They followed him to a sheet of ice then lost both the scent and the track. Those dogs have unbelievable noses, but I learned that once a cat makes it to the ice, he or she leaves no scent for the dogs to follow. Amon and his boys grabbed T and Sir and the hunt for a cougar—any cougar—continued.

For the first four days of the hunt, no more snow fell after the ride in. For cat hunting, you really need fresh powder and this time of year Mother Nature usually delivers at least 1” every day. Amon came to us on the fifth morning and said the weather is “not conducive to cougar hunting.” He asked if we wanted to head home and come back another time when the weather was more ideal. After some fraught but sober discussion, we decided to pull up camp and head home after breakfast.

Well, as Mother Nature will tend to do in the mountains, there was a new forecast by the time we finished breakfast: chance of snow later that day and then again on Day 7.  This was a game changer and we made plans to ride out the rest of the hunt.

True to the forecast, the snow set in the middle of Day 5. Now all we needed was either or both of our quarry and its prey to start moving.

Day 6, we logged what seemed like hundreds of miles looking for fresh tracks. However, as critters will often do to preserve energy and attempt to survive winter, they were all hunkered down, not moving at all. A landscape that was previously covered in fresh elk tracks now was devoid of any sign of life.

Over the course of six days hunting, we burned completely through the 100 gallons of gas we brought with us. Amon and his son, Eshton, had to head back to the front-country to get another hundred gallons so we could finish out the trip. We were on the finest public ground this Idaho unit has to offer and we aimed to cover every square inch of it.

From the moment Day 7 started it had a different feel to it. Somehow, I just knew it was going to be a “hunters’ day.”

It was quickly evident the light switch had turned back on for wild game and the snow. While covering ground, I saw fifty elk if I saw one, and some as close as 20 yards.

As we were making our lunchtime loop back to camp, unbelievably, we got on the big cougar track again. He had crossed just a few hundred yards from camp. From there, we pushed down a couple logging roads searching for the most recent track to set the dogs out. The hunt was on!

T and Sir worked the tracks through the thick forest, which poses its own set of problems. Underneath the canopy, the snow was melting off the trees and it seemed as if there was a rainstorm under the canopy. Water in the tracks washes out the scent making it harder for the dogs to stay on them. To Amon and his dogs’ credit, this wasn’t their first rodeo, and as a team they pushed through and worked the track until they got on the cat.

Listening to his hounds’ bark changing from “I’m working it” to “I’ve got him” will forever stick with me.  Their bark echoed through the forest sounding as if it could travel for miles. The dogs pushed the cat a short distance until he was treed.

317 snowy yards straight uphill was all I had to cover to make it to the dogs and cougar. In this country, on this north facing hill, this was an arduous 20-minute hike for me. Most of the way up, I’d take a step and fall through the snow down to my knees. In some parts, to my waist. It was exhausting, but the barking dogs at the tree were constant fuel and kept me pushing.

I finally made it, steadied my breathing, and put sights to the tree.

The story of this cougar lives on in memory and tales. It also lives on as food for my family, which brings me to answer the #1 question I’ve heard since the hunt: the meat tastes like country fried steak.

And, as promised, I’ll leave you with a few tidbits about lion hunting and conservation:

Hunting mountain lion is legal in many western U.S. states. Why? In the simplest terms, it’s because biologists have studied them, the animals they eat, and the habitat they roam. They have determined through scientific study and monitoring there is a certain number of cats that should be killed to keep cougars at a healthy population and the entire ecosystem around them balanced.

Cougars were roaming the Americas when humans crossed the land bridge from Asia 40,000 years ago.

Driven to almost extinction, hunters played a critical role in the establishment of the North American Model of Wildlife Conservation and, hence, the rebounding of mountain lions to robust populations. The North American Model put cougars and other game animals under the managed game species model vs bounty/hide-driven model that pushed animals like cougar and bison close to extinction.

Today, hunters continue to bear the largest burden in funding the scientific research and management that supports these animals.  Through hunting license revenues, the Pittman-Robertson Act, direct donations to conservation organizations (RMEF, TRCP, BHA, etc., etc.), and many other avenues, hunters play a crucial role in the health and sustainability of one of America’s greatest treasures: the cougar. 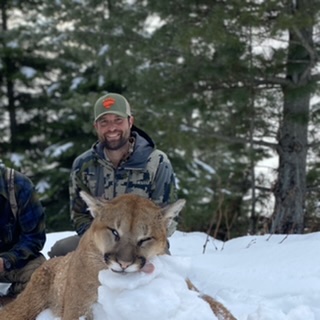 About Aaron Towns
share on
See other posts related to North Carolina News
Get the latest news and stories, right to your inbox.
Search
Local Chapters