The following LTE was written by BHA Life Member, Bill Sustrich as a follow-up to an open house that Senator Udall and Congressman Lamborn held on the draft Bown's Canyon Wilderness/Monument legislation. 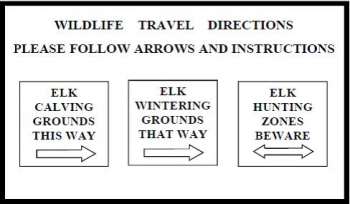 There were no real surprises emerging from the public meeting at Noah’s Ark on 4-13-13 relating to the future of Browns Canyon. A large majority of the audience comments were centered around the age-old axiom, “What’s in it for me?” Senator Udall was kept busy trying to soothe and calm as many speakers as possible and Congressman Lamborn repeatedly stressed his support for the greatest public usage for the most people.

With the area plastered with signs, how long before a “Wildlife Travel Management Plan” surfaces? Perhaps it would be something along the lines of these examples, which I revealed at the meeting. These are admittedly a bit far out, but what will reality bring us? Think on it.