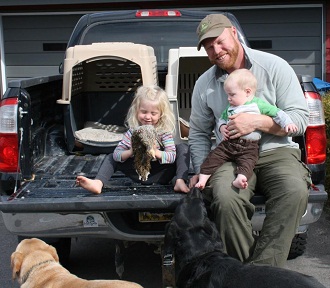 Land is a 5th generation Montanan who garnered his conservation ethic from a young age in duck blinds on warm water sloughs in the Bitterroot Valley, at the end of a flyrod during the salmon fly hatch on the Big Hole River, and chasing the wily wapiti in Cinnabar Basin.  Land received a BS in Wildlife Biology from the University of Montana in 2000 and a PHD in post hole digging fencing in the family Quarter horses and mules. Fresh out of college, he worked for a newly formed sportsmen organization called the Theodore Roosevelt Conservation Partnership (TRCP) as their National Grassroots Coordinator. Much of his work at TRCP was aimed at protecting quality places to hunt and fish via roadless areas and promoting volunteer incentives for landowners to provide public access to private lands.  After four years working for TRCP, Land joined the staff of the National Wildlife Federation (NWF) as Regional Representative in Missoula, Montana.

In 2007, Land was promoted to Senior Manager for Sportsmen’s Leadership at NWF.  In this capacity Land led a joint campaign with NWF, TRCP and Trout Unlimited called Sportsmen United for Sensible Mining aimed at reforming the 1872 Mining Law.  Working with over 600 local, state and national sportsmen organizations, former US Forest Service chiefs, and former state fish and game directors the coalition was able to get comprehensive legislation with bi-partisan support through the House but unfortunately stalled in the Senate.

In 2009 Land initiated Vanishing Paradise, an effort to nationalize the issue of coastal land loss in the Mississippi River Delta which winters 11 million ducks and geese every year and supports world class redfish and speckled trout fishing opportunities. This joint campaign between NWF, Ducks Unlimited and Louisiana Wildlife Federation built an army of 700 local, state, and national sporting businesses and organizations and over 70,000 individual hunters and anglers from all over the country that were essential in passage of the RESTORE Act through the US Congress, dedicating 80% of the Clean Water Act penalties (estimated at $15-$20 billion) associated with the Deep Horizon oil spill back to restoration of this national treasure.

In addition to his campaign duties, Land helped build the sportsmen profile within NWF, acted as laison to the national sportsmen organizations, created two sportsmen advisory councils and was a member of the Wildlife and Hunting Heritage Conservation Council that gives advice to the Secretaries of Interior and Agriculture on issues concerning hunting and fishing.  In short, Land has spent his professional career building, energizing and activating hunters and anglers to carry on our rich outdoor legacy.

In his spare time, Land sits on the boards of the Phil Tawney Hunters Conservation Endowment, named after his late father, and Hellgate Hunters and Anglers, a local rod and gun club based in Missoula.  Any other spare time is spent on the stream, duck blind, or chasing big game. Land enjoys anything outside with his wife Glenna, daughter Cidney, son Colin, and two labs…Gabriel, ”The Arch Angel of Ducks” and Triple “T”, Teller Turk Tawney.