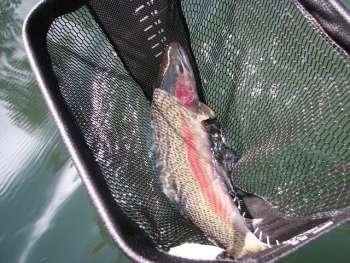 Wild fish and Mitigation fish. One for the river, one for the bag. But you can’t have one without the other. What’s the difference? Wild fish are nature’s way of providing for free flowing rivers. Mitigation fish are man’s way of paying to artificially simulate nature, when barrier dams break the system’s conveyor belt.

Wild fish make up nature’s original gene pool and are the seed source used to propagate mitigation fish via hatchery production.  Dilution of the natural DNA structure that has been fine tuned by eons of time, or eroding it into extinction may have long term catastrophic consequences. The jury is still out, but the likely-hood that man will be able to perpetuate hatchery fish forever if the wild genes reach extinction, is highly unlikely.

How can we improve chances for sustaining or improving the wild fishery on a personal level?  When fishing for salmon and steelhead, whatever we can do to increase survival rates when catching and releasing fish is important.

Don’t fish biologists build in an incidental mortality rate when they make the regulations? Yes. They know some fish will be killed by handling during the release process, and allow for such. But, without much research that figure is mostly an educated guess.

So, when EVIDENCE surfaces that provides new information, evolution in our thinking can be changed to adapt to the situation. A recent Canadian study suggests that:

"The brief period of air exposure which occurs in many "catch and release" fisheries is a significant additional stress which may ultimately influence whether a released fish survives."

Harvest regulations will eventually be impacted by new evidence, and when mortality rates go up, seasons length, and/or bag limits go down. So what we do to improve survival rates of released fish, might help off-set further restrictions down the road.

As a guide, I feel responsible for helping educate the fishing public about nature’s resources and what we can do as responsible stewards towards  sustaining such when man’s impact is so significant to the planet.

Have I ever netted a wild fish? Yes. Have I held one up for a picture before releasing? Yes. Have I ever played one too long on too light of tackle? Yes. Even so, long ago I came to suspect that it was very important to minimize handling time of wild fish. Thus, I went to single, barbless hooks, and avoided netting wild fish whenever possible. Good pictures can be had of a wild fish from the side of a boat or while it is still  in the water. Mitigation fish can be used for “possession” pictures, for those in need of that.

The evolution of my thinking about my actions as a fishing guide changes as new information surfaces, as science is not absolute. With new evidence, adaptations allow us to align ourselves more harmonically to nature’s way. Gleaning facts from this Canadian study is one example of how we can improve on our own behavior to help protect the fish we love.  Until we can remove four Snake River dams (the most significant fish killers, if you subscribe to science: and economically viable if you still believe in the research data) to improve our wild gene pool, what we do with the remaining mortality variables is even that much more significant.

This is my take, and I’m sticking to it, at least until new evidence surfaces to change it.

Gary Lane is a hunting, fishing and whitewater rafting guide. He lives in Riggins, Idaho with his wife Barb where he owns and operates Wapiti River Guides.

About Gary Lane Crisp
share on
See other posts related to the campfire Backcountry Skills
Get the latest news and stories, right to your inbox.
Search
Local Chapters