A Feature from the Winter 2017 Issue of Backcountry Journal

A bull elk steps tentatively out of the trees, his tan coat glistening in the early morning sun. Steam rises from his nostrils as he tests the air for danger. Across the meadow a man crouches in the tall grass waiting for a shot. A few tense moments pass. Then the animal turns, lays his antlers along his back and bugles into the crisp September air. 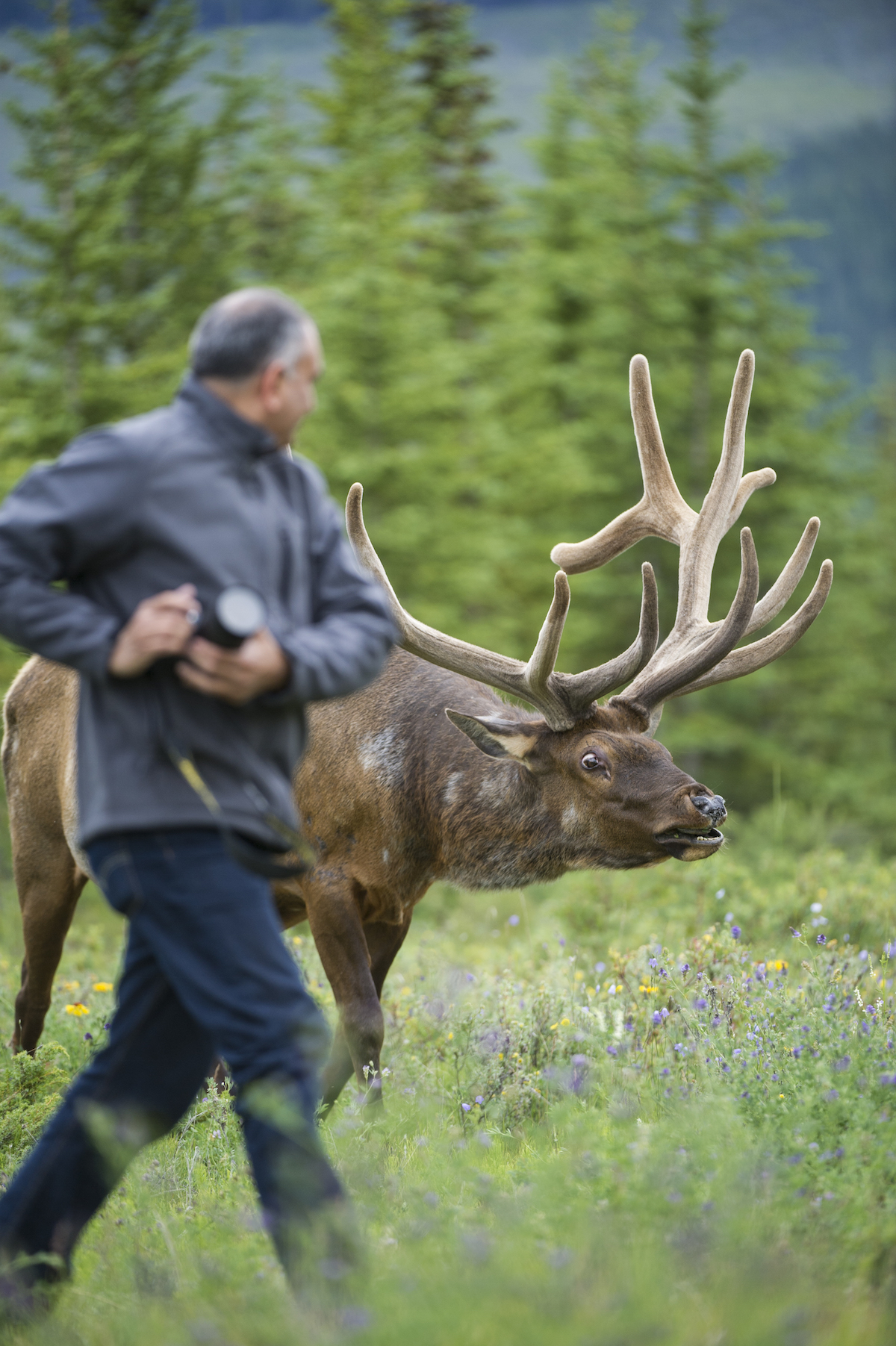 Armed with only a tripod and a camera, he’s a new generation of outdoorsman. There’s a mountain bike on the back of his car and a kayak mounted to the roof rack. He’s one of millions of Americans who access public lands for hiking, camping, biking, jogging, and viewing wildlife and scenery. One thing he doesn’t do, however, is hunt. And in that he represents a growing trend toward “non-consumptive” outdoor recreation.

In 1960, the US Fish and Wildlife Service counted almost 14 million hunting license holders in the US, making the sport one of the most popular outdoor activities in America. But that popularity has not kept pace with changing demographics. There’s nearly 140 million more Americans today, but almost the same number of hunters.

Interest in wildlife has not stagnated in the same way. According to a U.S. Census report, 22 million people identified as wildlife viewers in 2011, compared to 13.7 million hunters. From 2000 through 2007, four out of the five most popular outdoor activities had to do with photographing or observing nature (the other activity was motorized off-roading). Hunting didn’t even make the list.

This trend leads to questions about the future of hunting. In order to accommodate the growing interest in wildlife viewing, will land managers and fish and wildlife agencies be pressured to move toward a less consumptive approach to wildlife conservation? It questions the role sportsmen play in conservation and the public’s appetite for an activity that conflicts with its more urban sensibilities about nature.

Jim Kellogg, president of the California Fish and Game Commission, resigned last year over frustration with a commission that has become less and less supportive of hunting. “They are not listening to DFW scientists and biologists recommendations,” he said in a January 2016 interview with the Outdoor Wire. “All of it has been politics – not science.”

The pressure to marginalize hunting has only increased following high profile incidents like Cecil the lion, Corey Knowleton’s $350,000 black rhino hunt and Sarah Bowmar’s video of her husband spearing a bear in Canada. The public uproar has bolstered critics’ arguments that wildlife viewing is a much less invasive path to conservation than hunting.

However, a report published by the United Nations and the Convention on the Conservation of Migratory Species sounded the alarm on wildlife viewing back in 2006. It warned against the growing problem of tourists disturbing wildlife and the damage they do to habitat.

Tourism operations tend to be located in biologically sensitive areas where wildlife are concentrated. Too many tourists can cause stress in animals. In the presence of people, wildlife may spend less time feeding or resting. Breeding success may be reduced, as well as resistance to diseases. Wildlife may move to more remote or less productive habitats that bring them in direct competition with other species or make them more vulnerable to predation.

Tourism operations also require roads, facilities and other infrastructure that can place a burden on habitat. Fragmentation that impedes migration can cause populations to become isolated, thereby reducing their genetic diversity over time.

Crowding, pollution, garbage and sewage are ongoing challenges of regulating tourism. Yellowstone National Park, for example, requires approximately 780 staff to manage its 4 million annual visitors. Those crowds provide a crucial economic boost to surrounding communities, which helps support the park’s existence. However, according to the park’s own business plan, it doesn’t generate sufficient revenue to cover its operating budget, let alone its wildlife management obligations. Instead it relies on federal appropriations for the bulk of its conservation funding.

That gap between boots-on-the-ground conservation and the wallets of tourists presents a budgetary challenge to wildlife agencies. Most wild public lands are not managed for tourism and don’t have the broad appeal that Yellowstone and Grand Teton national parks have, yet they are equally in need of money for fish and wildlife. Even if tourism could generate enough revenue, relying on Congress or state legislatures to appropriate it wisely seems wildly optimistic. 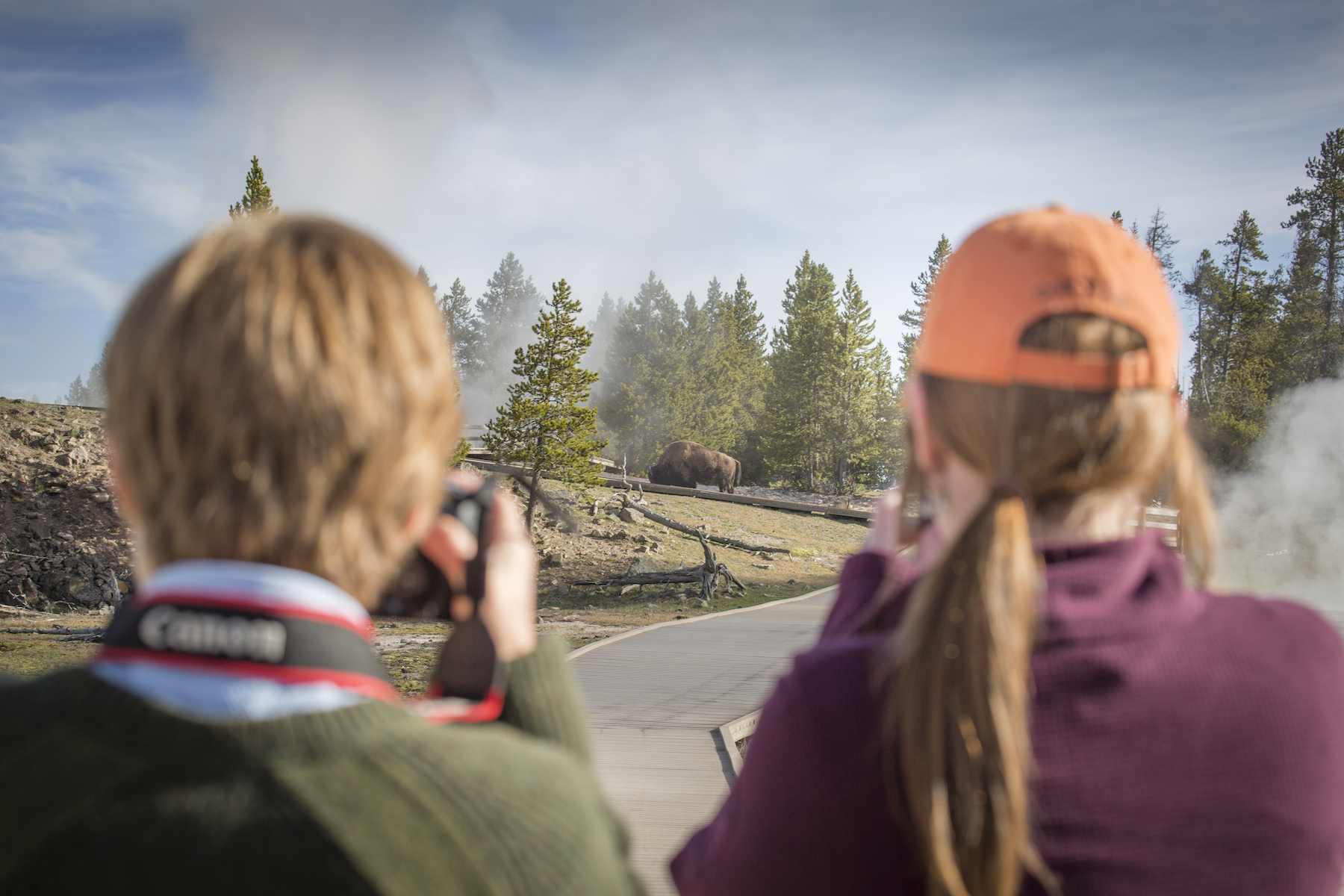 The Land and Water Conservation Fund, for example, is supposed to receive $900 million annually from oil and gas leases. How many times has that happened in its 50-year history? Only once. Large portions of that money are usually siphoned off for other purposes that have nothing to do with conservation. And Congress isn’t likely to have a change of heart any time soon. In 2015 it nearly killed the program altogether. That kind of uncertainty doesn’t lend itself to a sound, long term conservation strategy.

The budget challenge underscores the essential difference between hunting and other forms of outdoor recreation. The money sportsmen spend on licenses and tags goes to fund the bulk of state fish and wildlife agencies’ budgets. Excise taxes on hunting equipment, firearms and ammunition contribute millions annually as well. In these ways, hunters contribute to conservation directly and distribute conservation funding over a wide geographic area rather than on a few high profile locales.

The agencies use the money to develop wildlife management plans with specific objectives, goals and strategies. They develop programs, perform field surveys and improve habitat. They study wildlife behavior, migration patterns, human impacts, diseases, invasive species, etc. that make it possible for wildlife to flourish in the face of an expanding human population. They enforce game laws, respond to human/wildlife conflicts, engage in public education and help provide opportunities for the public to participate in the outdoors. In short, the “sport” of hunting isn’t just a contributor to conservation, it’s an integral part of it in a way that other forms of outdoor recreation are not.

Hunting allows us to fill the niche our hunter/gatherer ancestors once occupied. When well regulated, the presence of hunters on the landscape has a positive impact that goes beyond just managing animal populations. It helps keep wild animals from becoming habituated to people, which reduces the potential for conflict. It affects their habits and behavior, which has a trophic influence throughout ecosystems that helps bolster diversity. It keeps animals wary and vigilant, improving the chances of survival for those that are, and removing those that aren’t from the gene pool.

In his book Going Wild: Hunting, Animal Rights and the Contested Meaning of Nature, Jan Dizzard details the sometimes contentious issue of hunting versus wildlife viewing. The showdown was in the Quabbin Watershed in central Massachusetts. A 50-year ban on hunting there had produced a large and approachable deer population estimated at between 20 and 50 animals per square mile. For many it was a kind of Eden, a pristine wilderness where humans and wildlife could coexist in peace. The deer, however were quickly eating their way through the hardwood forest, jeopardizing the health of the watershed. Alternatives to hunting were considered but deemed impractical.

So in 1991 over a storm of protest, an annual controlled deer hunt was established as the best and most cost effective approach to management. The success was stunning. Within a few short years the deer population came down to a sustainable level and the forest recovered. Today the Quabbin supports a healthy deer population of approximately 15-20 per square mile. They’re wild, meaning they behave like wild animals, and because the hunt is regulated, only a small percentage of hunters are successful, ensuring the continued health of the species and its habitat.

It’s a myth that by not hunting a person does no harm to wildlife. By far, the greatest threat to wildlife today is habitat loss, and by embracing the values of an industrialized society we are all culpable. Expanding urban boundaries, fragmenting habitat, diverting water for agriculture, sacrificing wildness for more outdoor recreational opportunities – the list of ways we’re making the world less livable for wildlife is long. Aldo Leopold wrote, “Our tools are better than we are, and grow better faster than we do. They suffice to crack the atom, to command the tides, but they do not suffice for the oldest task in human history, to live on a piece of land without spoiling it.”

Hunters are part of a tradition that goes back over 2 million years when our ancestors carved meat off the ribs of wildebeest using stone tools. The tools have changed, but the value of wildlife and the hunter’s relationship with the natural world have not. Hunters still value robust populations of wild game and work to conserve them. Hunting still requires skill and a knowledge of the land. Hunters still study the habits of their prey and expend a considerable amount of effort and expense in pursuing them. Animals are still valued by the hunter for the food they provide, for the beauty and utility of their hides, horns, teeth, claws and feathers, just as they were by our ancestors.

The challenge sportsmen face today is promoting that message to a society that’s increasingly disconnected from nature. There are reasons to be optimistic as more people seek alternatives to industrially raised meat. More women are getting into hunting, as are young urbanites who have had no previous exposure to the hunting culture. They’re being drawn by a desire to know where their food comes from, ensure that it’s organic and feel confident that the animal that feeds their families lived a humane life.

Signs are encouraging, but as more and more species throughout the world become threatened and face extinction, hunting is likely to be viewed by more and more of the public as a useless excess. It won’t be easy to convince them that hunting and conservation are two sides of the same coin, but it’s a challenge that needs to be tackled.

The wild public lands of the future will likely not see a shortage of hikers, joggers, paddlers or binocular toting tourists. But nature needs us to be wild sometimes too, to connect with it as our ancient ancestors did, not in the abstract, but viscerally, by meeting it on its own terms. It needs us to understand that we’re only one of over 7 million other species of animals in the world. And although we may be the product of an extraordinary evolutionary journey, we’re still a part of the world of animals – and not the other way around.

A chapter chair from 2010-2015, Ed currently sits on the Oregon Chapter board for BHA. He lives in Bend.

share on
See other posts related to media the campfire backcountry journal
Get the latest news and stories, right to your inbox.
Search
Local Chapters