On the morning of Oct. 19, 2018, Crystal and Justin Sandy were following a herd of elk in a large basin near the Salmon-Challis region of Idaho when they witnessed a white Toyota pickup operating on a road closed to vehicles. Knowing that the vehicle’s presence in the basin had likely already ruined their chance at harvesting the mature bull they had spotted the night before, the Sandys chose to report the clear violation of the road closure to the local Idaho Fish and Game officer, Joe Heald.

Justin approached the vehicle and was able to document the violators with a cell phone video, which clearly showed the license plate, occupants, and hunting equipment. He also spoke with the men, who claimed that although they did indeed have their guns, optics and tags with them, they were merely pursuing lost cows. When Justin noted that they were clearly looking at a herd of elk, not cattle, the men played dumb and drove off.

BHA issued a $230 reward to the Sandys after Idaho Fish and Game officers cited the offending parties for illegal OHV use. BHA offers up to a $500 reward for members of the public who step up and report illegal off-road activities that result in the conviction of those who threaten wildlife habitat and jeopardize public access to public lands.

BHA reached out to Crystal and Justin about the incident. Crystal expressed her gratitude for BHA’s support of strict OHV regulations enforcement, “I hope this guy gets brought to justice; it ruined my entire hunt. I’m so glad that BHA is taking action against these violations. We were out that day with a friend and his 12-year-old son on the boy’s first hunt, and these men drove right past him. It ruined the boy’s first day out, which gets my blood boiling.” Though the Sandy family was unsuccessful that day, Crystal was able to tag out on a dandy five-point bull later in the season.

While responsible OHV users are in the clear majority across the western United States, those who choose to ignore the rules and regulations concerning off-road use jeopardize the outdoor experience and success rate of every hunter and angler in the area. BHA is proud to reward those who stand up for wildlife and our public lands and waters and encourages members of the public to report illegal off-road activity.

In addition to encouraging fellow public lands users to help self-police illegal OHV activity, Idaho BHA works hard to ensure local members are engaged with the USFS on planning decisions, work projects and other land management decisions.  Learn more about how you can get involved, and help support our OHV Reward Fund by donating to BHA. 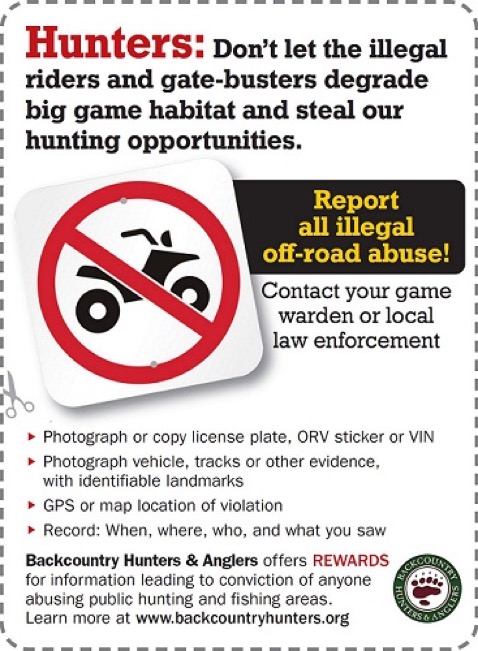 share on
See other posts related to OHV Idaho BHA Idaho Issues blog
Get the latest news and stories, right to your inbox.
Search
Local Chapters