On May 31- June 2, 2019, 17 volunteers from Idaho BHA joined Idaho Fish and Game staff at Craig Mountain Wildlife Management Area (CMWMA) to for a hands-on stewardship project to enhance wildlife habitat. The CMWMA is approximately 115,000 acres of critical wildlife range that is south of Lewiston.  This year represents the seventh year over the last decade that Idaho BHA has performed a conservation project at Craig Mountain!  The project was led by Idaho BHA co-chair Eric Crawford of Moscow.  Some volunteers traveled 5 hours to participate. 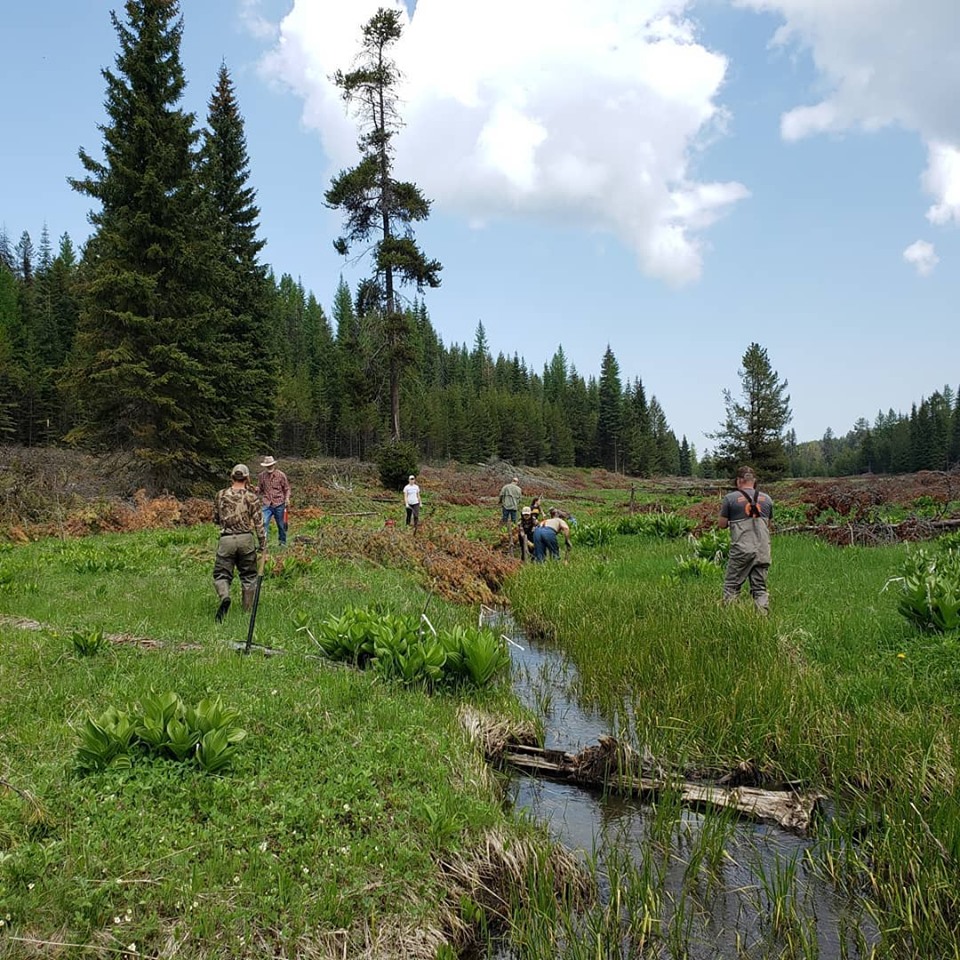 The primary purpose of this weekend was to construct beaver dam analogues along the Benton Meadows riparian area immediately below the IDFG work cabin area. Beaver dam analogues (BDAs) are, essentially, “fake” beaver dams constructed within an existing stream using vertical tree posts pounded into the stream bed then interwoven with cut tree limbs. The purpose is not necessarily to attract beavers to a new area. Rather the BDAs help slow spring runoff, capture sediments, create pool areas supporting riparian plants and to eventually attract a host of wildlife species.

IDFG intends to later plant woody riparian vegetation such as willow and dogwood in the Benton Meadows to similarly attract other wildlife species. Benton Meadows feeds into Deer Creek, a stream connecting to the Salmon River miles below and known to support anadromous fish like steelhead. 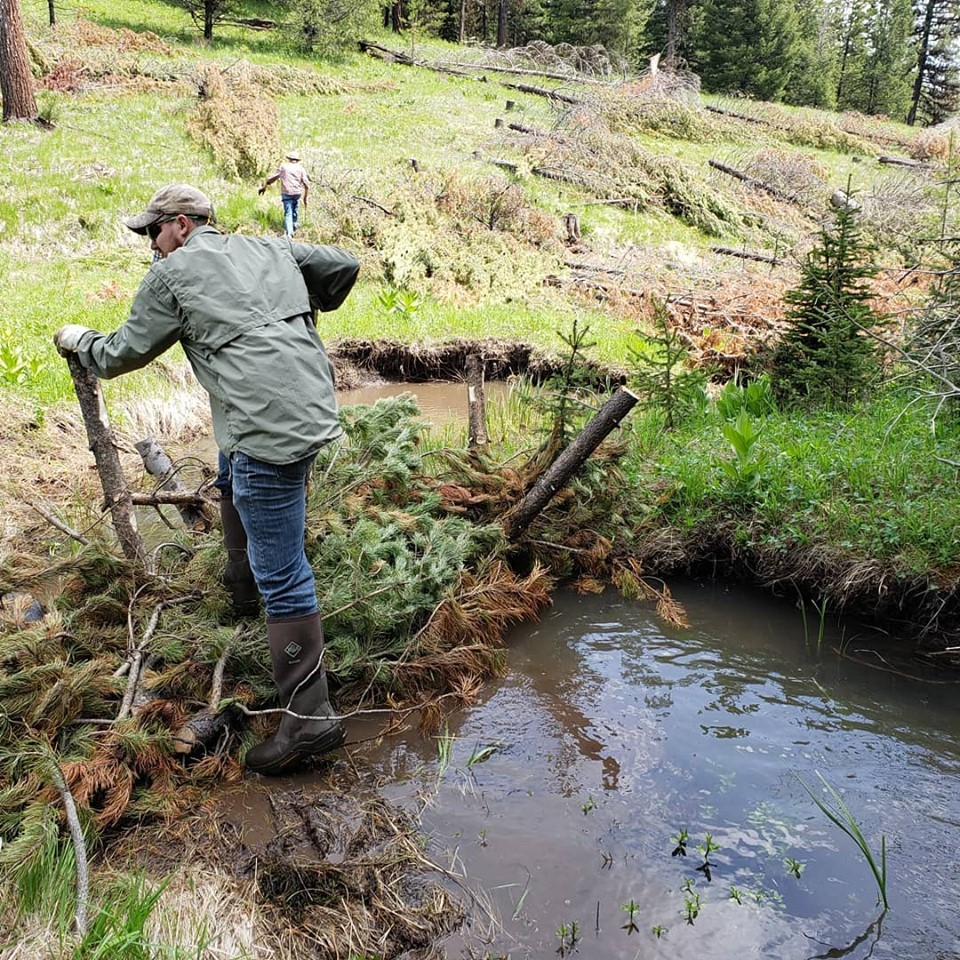 The work was physically demanding, with teams of 4-5 people pounding vertical posts into the stream bottom and dragging dead tree limbs to be woven between the posts. The benefits of the woven limbs was enhanced by compressing each limb layer using body weight to compact each successive weave.  Almost immediately after adding the tree limbs, water slowed and pooled behind the small dams.  In total, 21 dams were built, each about 60-100 feet apart.

On Saturday evening, Idaho BHA leaders cooked a Dutch oven meal of pulled pork, complimented by salad and drinks for the volunteers. At dusk, beverages were shared, stories told and the group watched the Steven Rinella documentary Stars In the Sky: A Hunting Story while sitting in camp chairs under a fine Idaho sky. 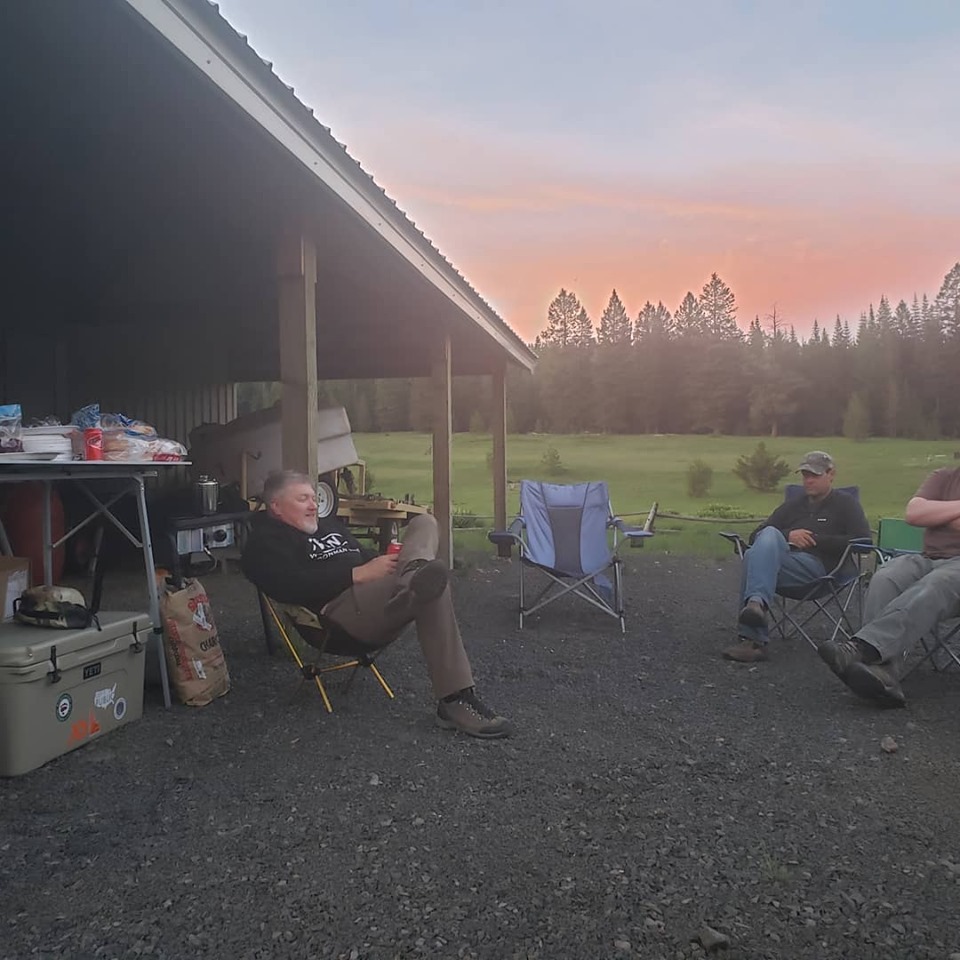 share on
See other posts related to issues habitat Idaho BHA news
Get the latest news and stories, right to your inbox.
Search
Local Chapters