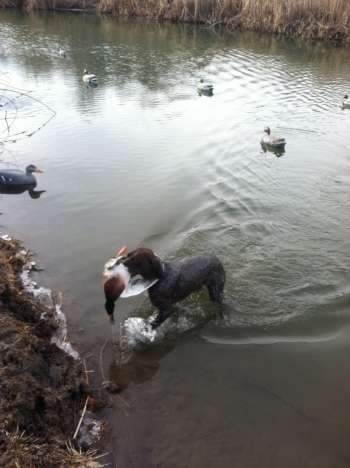 For a masochist like me there is something strangely appealing about waterfowl hunting in cold weather. To me, hunting is about getting away from the crowds and enjoying the peace and solitude of the hunt, which often requires enduring pain and discomfort that others are often unwilling to subject themselves to, for good reason.

The misery of being cold and wet, and wanting to test my limits in order to realize the reward of wing shooting mallards on the marsh is what prompted me and my friend Charlie to take a two hour walk into the marsh one frigid January morning. This walk provided us with a hunt that no other hunter was willing to work for.

The previous day, I had scouted out a lake I often hunt and noticed there was a giant ice sheet, about 40 acres in size, blocking boat access to the delta marsh that spills out into the lake. While others might see the ice as a hindrance, I knew that I could hike in from the opposite side of the marsh and hunt the main river channel where it dumped into the lake, which stayed open despite the bitter temperatures. I knew that if I made the hike, I would have the place to myself. The only thing between me and the channel was several miles of thickets, cattails and nasty brush.

My phone call to Charlie laid out the plan. We would have to find our way through the marsh in the dark, to a place we had never been before. “What time should we leave?”, was all he asked. There was no guarantee of success, but the potential rewards were high.

Using a compass, we aimed for the main river channel and slogged through thickets of cattails with neoprene waiters on and swollen decoy bags. Progress was painfully slow and difficult. Despite the freezing temperatures, we were drenched in sweat and nearly ready to throw in the towel after reaching yet another thicket of cattails that seemed too thick to walk through. We ventured on and after getting turned around and disoriented more than once, we eventually reached our destination and unloaded our decoys on the meandering river channel.

To be clear, most of my hair-brained plans turn out to be failures. But this time I got lucky. At first light we had greenheads coming in faster than we could re-load. My German shorthair pointer, which I cross-trained as a water dog against her better instincts, could hardly keep up. As we filled our limits on drake mallards, we savored the rare opportunity of having the solitude of the marsh all to ourselves. At least this time, a half-baked plan and a miserable approach rewarded us with the ultimate payoff.

About Brad Brooks
share on
See other posts related to the campfire Backcountry Stories
Get the latest news and stories, right to your inbox.
Search
Local Chapters