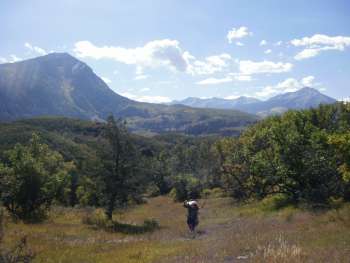 As a big game hunter, veteran, and chairman of the Colorado Backcountry Hunters & anglers (BHA), I’ve watched with some trepidation during recent months as a select (and misguided) few among our state’s lawmakers and county commissioners have encouraged extremist fringe-types, like Anderson, by pushing ginned up proposals to transfer federal public lands to the state or sell them off outright.

Although such shenanigans aren’t new, and have been bull-horned about mostly by Sagebrush Rebellion-types who claim public lands infringe upon their personal liberty, they all have the same end result: turning public lands over to private interests. BHA executive director Land Tawney is no stranger to such malcontent outliers.

“People should see the ‘state control’ mantra for what it is: a smokescreen. State budgets are already stretched … and states are not eager to pick up the costs that are part-and-parcel of managing these lands. Firefighting costs alone would crush state budgets. States would face only one resolution: sell the land. Public land liquidation would be a wholesale disaster for the American outdoor family.”[2]

Thanks to the foresight of great hunter-conservationists like Theodore Roosevelt, we have an outdoor heritage unmatched anywhere in the world. Hunting and fishing is a cherished tradition for millions of American families, not a privilege reserved to the landed elites. Our system is the envy of the world and depends on keeping public lands in public hands. Consider:[3]

■ Over 70 percent of sportsmen and women say they hunt and fish primarily on public land, along with over 90 percent of Colorado’s sportsmen.

■ National forests and other public lands provide the headwaters for our most cherished trout streams and clean water for all.

■ Our national forests are America’s largest source of municipal water supplies, providing fresh water for over 66 million Americans in 3,400 communities in 33 states.

■ Visitors spend $13 billion directly in those communities within 50 miles of the national forests and grasslands.[5]

And more than 250,000 hunters and 660,000 anglers take to Colorado’s woods and waters every year. With untold miles of Gold Medal streams and more elk and mule deer than any other state, Colorado is a sportsmen’s paradise. Each year, in small communities all over Colorado, these sportsmen spend money on food, lodging and services. All this shouldn’t be put at risk by an out-of-touch fringe element looking to sell off our public lands heritage.

Following the July 2013 destruction of government property incident, the BLM and U.S. Attorney’s Office initiated an investigation that led to the indictment and July 24, 2014, arrest of Anderson, without incident, by the BLM, FBI and U.S. Marshals Service (he appeared in court the next day). If convicted, he faces up to 10 years in prison, plus fines of up to $250,000, and up to three years of probation. Anderson is scheduled for a jury trial in U.S. District Court in Denver on Monday, Sept. 22.[6]

Colorado BHA applauds the BLM and U.S. Attorney for standing up to lunatic-fringe extremists like Anderson and support prosecuting him to the full extent of the law. Contrary to what Anderson (apparently) believes, our public lands heritage serves to enhance American’s personal liberty and it’s not for sale! What can you do? Sign the Backcountry Sportsman’s Pledge today to show your support for keeping public lands in public hands: http://www.backcountryhunters.org/index.php/sportsman-s-pledge

David Lien is a former air force officer and chairman of the Colorado Backcountry Hunters & Anglers (www.backcountryhunters.org). He’s the author of Age-Old Quests: Hunting, Climbing & Trekking (http://outskirtspress.com/ageoldquests/) and was recently recognized by Field & Stream as a “Hero of Conservation.”[7]