Watching them rub the freshly killed mallard drakes on the granite made me pause. I had performed the same ritual dozens of times, but this was different. Tears streamed down my face. The pain of losing him hadn’t been this sharp in a while. 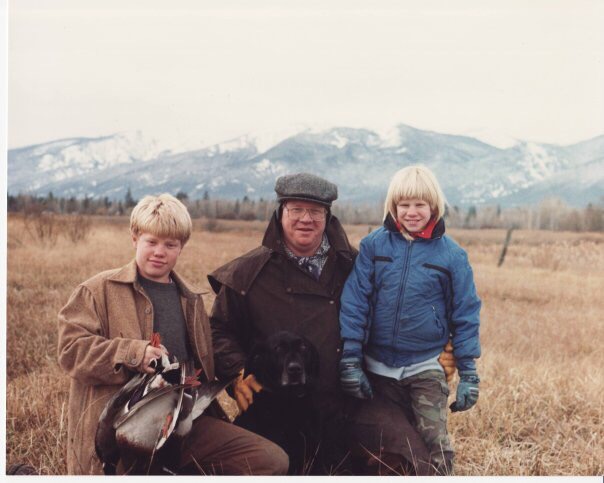 My father was a mountain of a man. At 6’ 2” and 240 pounds, with a booming voice and a personality to match, he had a presence. His thirst for the wild woods and waters was infectious. Growing up I heard stories of late night horse rides, early morning floats, and the pursuit of elk. When I was 2 he put me in a backpack and took me fishing. I was 8 on my first duck hunt. I can still feel the eruption of birds as they took flight from the roost. At 10 I remember literally following in his footsteps up a mountain in the Cinnabar Basin – if I hadn’t, I wouldn’t have been able to move in the deep snow. He ate bugs. Not just any bugs, but big ol 2 inch salmon flies, declaring, “Fish eat ’em. I eat ’em!”

Oh, what I wouldn’t do to take one last June boat ride with him down one of our fabled Montana rivers.

My father didn’t just love the outdoors and all the wildlife within it; he dedicated his life to it. He and my mother were the first full-time conservation lobbyists at the Montana legislature. He was the first lawyer for the Rocky Mountain Elk Foundation and wrote their articles of incorporation and bylaws then oversaw their lands program for a decade. Working with Otto Teller, my father helped set aside a gem of a wildlife refuge in Montana’s Bitterroot Valley. Each year he and Otto are celebrated at the annual Teller and Tawney dinner. My dad approached work like he did his outdoor pursuits: voraciously. I’ve heard stories of standoffs in the governor’s office, of his mastery of relationships and, the night RMEF got word of their first big donation from Budweiser, of a legendary celebration at the local watering hole. Some tell me he would have been governor of Montana.

Oh, what I wouldn’t do to share a nip of whiskey with him by a campfire, discussing the day’s conservation challenges and plotting and scheming how to address them.

Acute leukemia took my father from my two younger sisters and me on Jan. 9, 1995. I was 20 and my sisters were 17 and 10. My schooling had taken me to Seattle. After Dad got sick, he urged me to stay there and convinced me and everyone else that he would beat this bastard called cancer. A phone call from my mother set into motion a sequence of unforgettable events. A 7 hour drive home to Missoula to sit by his side, all 150 pounds of a once solid man, his elbowing me and the look he gave me. “Good to see you. Go take a shower.” Minutes later I was beckoned to witness his last breaths. 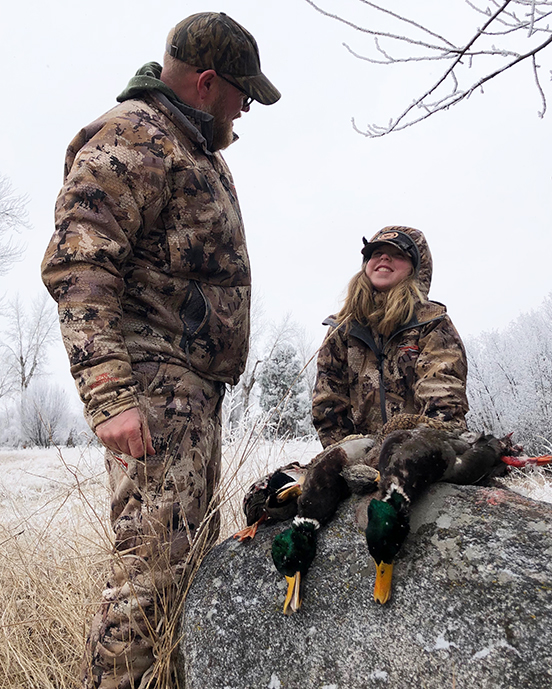 I’ve found that the hole his passing created is something that will never be filled. Over time the sharp glass edges that line the rim of that hole have softened like glass on a sandy beach. I found my calling that day in the hospital room, something for which I am forever grateful. I didn’t know it then, but that’s when the fire started to burn. I enrolled at the University of Montana later that year and eventually earned a degree in wildlife biology. Soon thereafter I started my career in conservation – now 20 years and counting – and never looked back.

My father’s ashes lie under a granite stone on a refuge he helped establish. I annually sojourn to hunt the same waters and then pay homage by bloodying his rock. I now take my kids with me to say hello.

To all the fatherless fathers: I hope you, too, have a place to remember and share. While the edges soften over time, every once in a while one of the sharp points penetrates deep in our core. I use to dread those moments. Now, nearly 25 years later, I yearn for them.

Dad, I know you are always around the next bend in the river, over the next ridge of the mountain or in the next hall of Congress ... I just wish I could catch up.

Land Tawney is president/CEO of Backcountry Hunters & Anglers, a North American membership-based conservation organization dedicated to serving as the voice for our wild public lands, waters and wildlife. Since taking the helm at BHA, he has expanded the group to comprise more than 36,000 members and chapters that cover 34 states, 2 Canadian provinces and one territory, and Washington, D.C. Land lives in Missoula, Montana, with his wife Glenna, daughter Cidney, and son Colin. His black Lab Tule can be found at his side most waking moments.