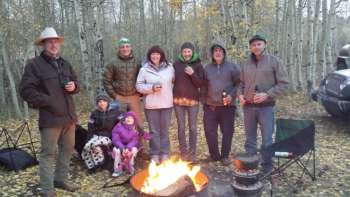 Here’s an update on Oregon’s BHA conservation work weekend.  We had a small group of volunteers who did some big things.  In all, we cleared over 650 acres from junipers invading some core wildlife habitat.  Check out our short video of this event here:

We want to thank several BHA members for their hard work.  Nick Dobric instigated this conservation effort on behalf of BHA.  Nick works in the Hart-Sheldon regions and knows them intimately.  Also, a big thank you to co-chair, Ed Putnam for not only working his tail off, but cooking Friday night’s dinner.  Ed has the Dutch oven thing down!  I’d also like to thank long-time member Karl Findling and his significant friend Renee along with Karl’s two daughters Maris and Libby.  Also, thanks to Sara Domek for her hard work and for keeping Nick pointed in the right direction.  And, special thanks to Jeff Mackay, Manager of the Hart Mountain National Antelope Refuge.  Jeff not only hosted the event, but worked side-by-side clearing junipers and was a fun addition to our campfire.

The Hart Mountain National Antelope Refuge was established in 1936 to provide habitat for remnants of antelope herds which were severely depleted.  Today, the refuge thrives and provides a spectacular backcountry hunting experience for pronghorn, big horns, mule deer, sage grouse, and other wildlife.

More information on the refuge can be found in this link:

This was a first time effort for the Oregon Chapter of BHA and we plan to continue our volunteer work at Hart Mountain.  So, mark your calendar for next June – 2015.  We plan to return then without the 70 mph winds, rain, sleet, and snow!

Thanks for your membership into our growing conservation-minded organization of backcountry hunters & anglers.  What started over an Oregon campfire ten years ago has grown to membership in all 50 states plus 17 chapters covering 97% of all public lands in the U.S.  And, we have a thriving chapter in British Columbia of which we are very proud.

Best regards to all,