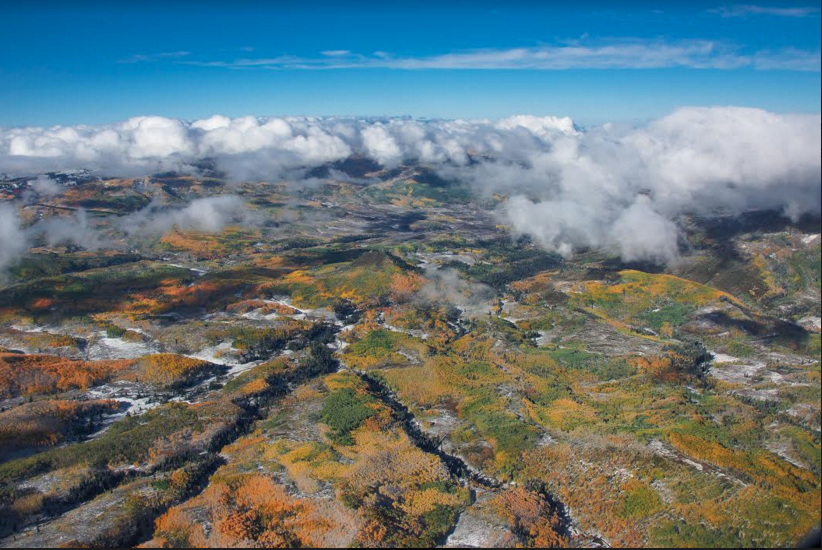 Imagine mountainsides splashed yellow by aspen leaves. A stream filled with cold, clean water gurgles on its way down from the highcountry. An elk bugles across the drainage, cutting through the crisp air of a September morning. Not a road, engine or cell tower in sight or earshot. Those lucky enough to frequent the Thompson Divide and Gunnison Basin know these moments well. Located in west-central Colorado and comprised largely of public lands, these two bordering geographic regions just may be a backcountry explorer’s paradise. Native cutthroat trout, trophy mule deer, high success rates among elk hunters – and with 80 percent of Gunnison County being public land – these opportunities are free to anyone willing to work for them. The combination of diverse habitat, roadless areas and lack of human presence have nurtured one of the nation’s greatest elk herds. It’s no wonder that the former world record bull was taken on the slopes of Gunnison Basin.

In recent years, the Thompson Divide and Gunnison Basin have seen growing pressures from oil and gas exploration, increased motorized recreation, road building and land development. Left unchallenged, these risks could result in serious habitat fragmentation and threaten the landscapes deer and elk need to survive.

Rallied by Colorado BHA Chapter leaders like Adam Gall and Tony Prendergast, BHA members and other sportsmen are trying to conserve these special areas. As the owner of Timber to Table Guide Service, Adam has a vested interest in the Thompson Divide; it’s his backyard and workplace. Through meetings with Sen. Michael Bennet, op-eds in local papers and representing BHA on public land working groups, Adam is helping spread the word that the benefits of protecting the Thompson Divide far outweigh those of mineral extraction.

“I’m not anti-drilling,” Adam said. “But there are certain places where it doesn’t make sense in terms of what you’re going to get out of it from an economic standpoint – and also what it’s going to do to the industries that already exist.”

Similarly, Tony Prendergast of Landsend Outfitters has played a pivotal role for long-term protection for the Gunnison Basin. As the BHA representative to the Gunnison Public Land Initiative, Tony is working with county commissioners, ranchers, recreationists and local communities to create balanced legislation.

“It’s hard for people to see the big picture of the ecosystem,” Tony said. “We bring perspective about how it is all connected and how important hunting is to the economy of this region.”

Thankfully, there’s a common understanding that conservation of the area’s rich wildlife resources and vast tracts of undeveloped lands are worth standing up for. A host of community members ranging from sportsmen, ranchers, hikers, bikers to motorized users have joined the Gunnison Public Lands Initiative and Thompson Divide Coalition. They are working towards conserving high value lands in the region through a variety of land management designations, including wilderness additions, wildlife-focused special management areas and mineral lease withdrawals.

Tony and Adam are also working hard to protect their hunting and fishing heritage by bringing new hunters into the fold. Adam offers guided, educational hunts for women, youth and first-time hunters, teaching them everything from the kill to butchering, processing and cooking wild game meat. He donated a hunt for auction at the 2016 BHA Rendezvous.

“It’s not about 300 inch bulls every time you go out. It’s about putting some of the best meat in the world in the freezer to feed your family,” Adam said. “If every year I can introduce five or six people to hunting, and they keep hunting on public lands for the rest of their lives, they have families, and share that with their kids, now you have more people vested in public lands who will speak up for them.”

Whether introduced to hunting and fishing by a guide, family member or mentor, we’ve all learned certain things from our time in the backcountry: self-sufficiency, responsibility and an ethic that respects the environment and the animals it supports. The conservation efforts underway in west-central Colorado demonstrate these values in action, where community-grown solutions improve public lands management in a way that respects everyone at the table. The Interior Department heard the unified outcry from sportsmen, ranchers and community members and withdrew 25 oil and gas leases in the Thompson Divide this November – a good start toward the goals of these conservation coalitions.

Brian is the Backcountry Journal intern and lives in Cody, Wyoming. He is leaving soon for a three-month bike tour of the West Coast to fish for steelhead.

About Brian Ohlen
share on
See other posts related to media the campfire backcountry journal priority landscapes gunnison
Get the latest news and stories, right to your inbox.
Search
Local Chapters