By Ed Arnett and Greg Munther

The forthcoming decision on listing the greater sage grouse under the Endangered Species Act has sparked controversy, fear and anger among Westerners. As expected, legislators are politicizing the issue — and not necessarily for the greater good.

Reps. Steve Daines of Montana and Cory Gardner of Colorado recently joined other members of Congress to introduce legislation that would delay the listing for 10 years. In Utah, legislators decided to use $2 million of taxpayer money on a controversial lobbyist-for-hire to fight for an unnecessary delay.

Lawmakers claim that a delay will allow "adequate time for local actions to develop and document results." On the other hand, the move to pay for lobbyist support leaves one wondering whether the intent is to obstruct conservation or actually protect the bird. So much for the goal of allowing time for conservation plans to bear fruit.

Is the delay really needed? What does it accomplish? Is it wise to kick the can down the road? Why not just implement solid conservation plans right now that would alleviate the need to list the bird — in one year or 10 years?

In 2005, the U.S. Fish and Wildlife Service determined that an ESA listing for the declining greater sage grouse population was not warranted, even though many biologists could see the writing on the wall. The result? Proactive efforts to address the issue and conserve sage grouse all but ceased.

Five years later, with no change in the trajectory of habitat conditions for the bird, F&WS determined in 2010 that sage grouse warranted protection under the ESA, but other species had higher priority. Now, the courts have decided that by September 2015 a decision must be made. Previous delays and lagging action now have culminated into a sense of urgency and perhaps even panic. 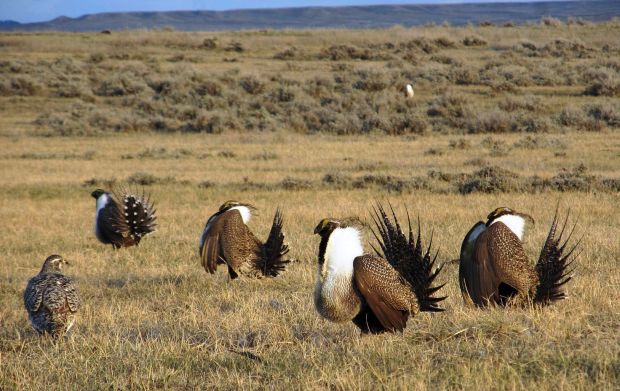 Investing in habitat conservation, as outlined in the Governors Sage Grouse Advisory Council is a conservative, economically sound method of ensuring meaningful sage grouse conservation. Wasting time and money to tilt at the windmill of the Endangered Species Act rather than simply implementing good practices now — will cost far more with little to no real result.

The costs of conservation measures to reverse declining greater sage grouse populations no doubt will be significant and require some changes and shared sacrifices. But long delays and lining the pockets of over-paid lobbyists only adds to the costs at the expense of conservation.

Time is tight as the September 2015 deadline looms, but time is available for state and federal agencies to develop strong plans, which can recover sage grouse numbers and avoid listing. Incidentally, those plans also will help mule deer, pronghorn, elk and about 350 other species that rely on sagebrush ecosystems. This will require states with populations of the bird to develop conservation plans that reduce or eliminate threats and pass muster with the Fish and Wildlife Service.

“Leave it as it is. The ages have been at work on it and man can only mar it.”

A greater sage grouse ESA listing is not a foregone conclusion. Avoiding it will require extensive collaboration and solid conservation plans from the states and federal government. Bolstering the health of sagebrush ecosystems and sage grouse numbers will produce benefits from which industry, recreationists, sportsmen and local economies all will gain. Investing in sage grouse also invests in Montana’s way of life.

To date, Gov. Steve Bullock has rolled up his sleeves and done the right thing, engaging sportsmen and other stakeholders who are working toward a conservation plan that can work for Montana.

We look forward to seeing strong actions based on that plan soon. We cannot wait for Hail Mary passes and pie-in-the-sky legislative efforts to save this iconic game bird.

About Greg Munther
share on
See other posts related to issues media habitat
Get the latest news and stories, right to your inbox.
Search
Local Chapters