The following post was written by BHA's Conservation Director, Holly Endersby, following an interesting hunt in the Idaho backcountry. 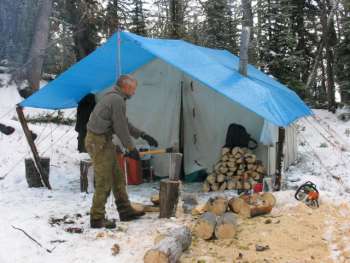 Clawing my way awake after a death-like sleep in hunting camp last week, the rain sounded really strange. Kinda a pitter, patter, stop. Pitter, patter, stop. Laying there listening to the sound, I figured it was because the rain was being dispersed by the fir tree looming over the tent. My eye lids begin to sag downwards again as my mind convinced me nothing was out of the ordinary when I heard my husband struggle out of his mummy bag and lurch out the tent flap with our dog, Buddy, tagging along.

And this to a dog that is squirrel obsessed! But I heard no tell-tale whining on Buddy’s part, so wondered if indeed it was a squirrel.

Then the tarp over the tent began shaking as Scott figured noise and action would scare any such critter away. Hearing nothing else, I again slid toward sleep as Scott and Buddy got back into their respective places in the tent.

But that strange rain kept on coming, keeping me right on the very edge of sleep but not quite able to slip over.

Suddenly, Buddy went nuclear after some as yet unseen critter as Scott grabbed wildly at a flashlight. I sat up in my sleeping bag and saw a fur ball go flying under my cot: “It’s a wood rat!” I yelled as I grabbed my headlamp. Buddy, who we affectionately call Air Buddy because of his ability to jump and leap in the air, made a perfect 10 point landing after sailing over my cot and before crashing into Scott’s. At this point Scott gave out a yell to curdle cream, “It’s on my chest!!!”

And the next thing I saw by the light of my headlamp was Scott’s hand plucking the large rodent off him and sending it sailing to the other side of the tent.

Finally, like any smart rat, our rodent headed for the kitchen.

The crash of the wooden kitchen boxes and the cascade of pots, pans, metal plates and utensils onto the dirt floor and Buddy with his butt up and head burrowed into the debris told the tale of a mighty struggle. By the time Buddy emerged with the dead rat in his jaws I was laughing so hard I was crying.

Seeing my big, ex-logger husband trapped in his sleeping bag with the rodent clinging to his chest hairs just about did me in.

I’m still waiting for Scott to see the humor of it all.

Have you ever had a run-in with an animal in your camp?  What was it?