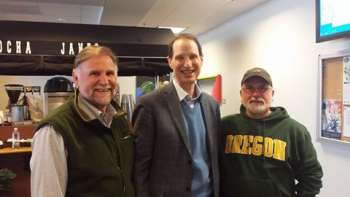 As 2014 came to an end there was some good news for hunters & anglers regarding the 50 year old Land and Water Conservation Fund.  Funding will continue for 2015 projects at the same level as last year - $306 million dollars.  But that is far short of what the fund is authorized to receive.  It covers only about one-third of the $900 million the fund should receive annually, according to the legislation.

People ask, “What is the Land and Water Conservation Fund and what does it do”?  LWCF is a law passed 50 years ago that takes fees from offshore oil/mineral exploration to support onshore public land needs.  It uses no taxpayer money.  The fund helps provide much-needed access to our public lands for hunters and anglers.  In Oregon, over $300 million dollars has been directed to hundreds of projects in the fund’s 50-year history.  Recent examples include the first phase purchase of the 10,000 acre Deschutes River Ranch north of Maupin.  This land would fit in seamlessly with existing public BLM land providing hunters/anglers better access opportunities along the Deschutes River for steelhead and salmon, bighorn sheep, and mule deer.  For further information, please view this video on the project:

As part of the $306 million allocated for LWCF in 2015, Oregon will receive $5,492,000 for projects that will protect timber and fish conservation in the Mt. Hood, Siuslaw, and Rogue River-Siskiyou National Forests.  A 45 acre parcel of private land will be purchased for $600,000 along the lower John Day Wild and Scenic River providing better access in the Cottonwood Canyon area.  How much more would Oregon have received had Congress fully funded LWCF at 900 million rather than 306 million?  Much more is the answer.

More importantly, LWCF is set to expire in September this year.  And, there are members of Congress who not only support a return of federal public lands to states and counties, but would also defund the Land and Water Conservation Fund and let it expire.  Hunting and fishing opportunities would decline and become available to only those rich enough to pay private land owners for access.  Oregon Senator Ron Wyden is not one of our elected leaders who want to privatize federal lands.  At a recent town hall meeting in Bend, Senator Wyden re-stated his strong support for full and permanent funding of LWCF.  You can view his comments in this short video:

What can we do as hunters and anglers to help preserve LWCF and public lands?  As Wyden stated at his town hall meeting, decisions at the federal level start at the bottom up – not the top down.  You can contact key elected leaders here to show your support of this important law for hunters and anglers:

Thank you for your support of our wild public lands, waters, and wildlife!