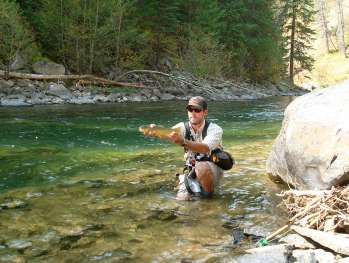 If you’re like me (or shhh, my wife), you often have trouble pulling fish out of big rivers.  Here in western Montana there is no shortage of great trout water (or so I’m told) – and that certainly seems to be the case…for others.  I’m not a novice angler.  I do occasionally catch fish when I go out and I have had some good days, but ususally they aren’t so good.  I can read water and I understand where fish should be holding, but often times, most times, I don’t catch them.  This could be attributable to several factors: not using the right fly, not having a perfect drift, not setting the hook when I do have a strike.  Could be one, or all of those, I don’t really know.  The truth is, it’s frustrating.  In a city like Missoula where I’m surrounded by world class flyfisherman and women, I am thrilled to catch 3 11-inch cutthroats in 8 hours of floating.  Sad, I know.

So, how do I deal with it?  What actions do I take to rectify my ineptitude on rivers like the Blackfoot or Bitterroot?  I head to the backcountry of course.  In my experience, there is no better place to boost your confidence, to make you feel like you deserve your own Simms sponsorship than in the backcountry.  Despite the crystal clear water found in wilderness or backcountry creeks and rivers, the fish are so amazingly easy to catch.  Are there limited food options back there?  Yep.  Is there little fishing pressure back there?  Yep.  Have most of the fish back there ever seen an artificial fly?  Nope.  I haven’t tried it yet, but honestly feel that I cold put my own belly button lint on a hook, toss it in the water and hold it in place against the current and I would catch a backcountry trout.

A few years ago, I had a research job based in Montana’s Bob Marshall Wilderness. My intern, a 20-year old kid from France, told me that he had never caught a fish.  I stood there on the banks of the river, admittedly starting to get a little bored by how frequently I was catching fish, so I handed him my fly rod with a hopper tied to the end.  When I passed it to him, the hopper remained in the water.  And as the rod passed to his hand, his eyes lit up because there was already a trout on the line!  Assuming this was the result of his instantaneous skill, he reeled it in.  Because he’d never caught a fish before, we kept it to eat, along with a couple of others, to cook over an open fire that night.  Here was this kid from France, deep in Montana’s wilderness, dining on wild native trout.  He absolutely loved it.

Later that summer, we floated some of Montana’s frontcountry rivers, but for some reason we never fished them. So, my intern returned home to France that fall with some awesome memories of fishing the backcountry and a feeling of how easy it all was … because of his skill, of course.

Share a passion for sharing the backcountry hunting and fishing experience with others?  Join BHA today!

share on
See other posts related to Backcountry Stories, The Campfire
Get the latest news and stories, right to your inbox.
Search
Local Chapters