If you’ve been following along with our Washington wildfire education campaign, Embers and Ecology, you know that our western forests evolved with wildfires, as explained by Dr. Hessburg in his TED Talk “Why wildfires have gotten worse and what we can do about it”.  Historically, our landscape was a patchwork of multi-aged forest stands and openings created by fire and regulated by these same burns in a feedback loop that reduced fuels and created natural fire breaks.  The patchwork meant that the frequent wildfires generally burned smaller areas and at lower or variable intensities.  As Dr. Hessburg states in his talk, this was “the power of the patchwork”.  Frequent, spotty fires across the landscape, ironically, allowed more forest patches to remain green.

This week for our Embers and Ecology topic, we look at how wildlife in Washington lives on our fire-prone, patchy landscape. 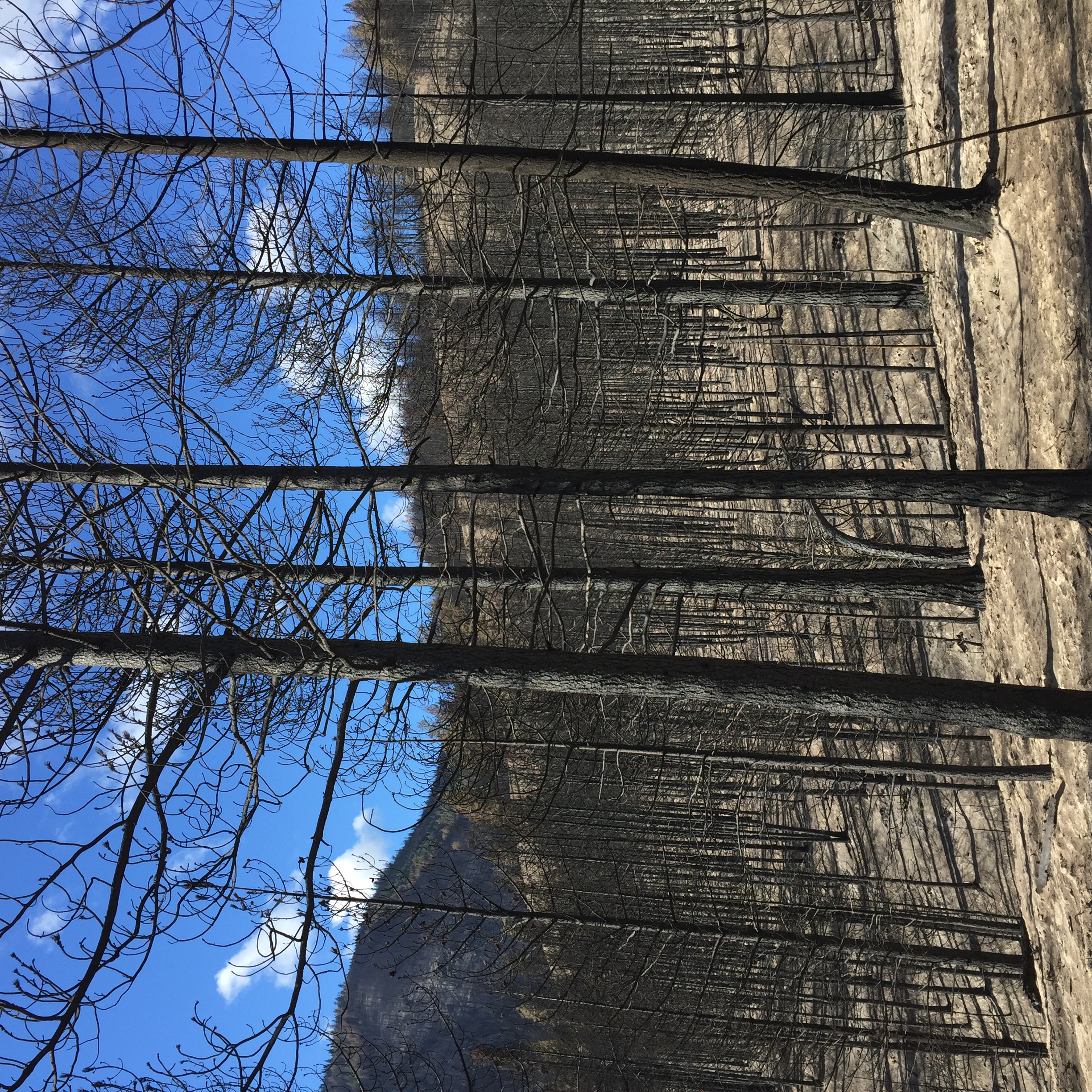 When a forest changes in a matter of hours from a stand of large trees with a thick understory full of vegetation and life to a blackened and bare stand of match sticks, you can be sure that the wildlife living there changes as well.  While it may seem apparent that for wildlife, habitat that goes from being unburned to burned changes from good to bad, the reality is much more complicated.  For every stage that a habitat passes through on its successional path from fresh burn to mature habitat, the food and cover that habitat offers changes.  And for each of these successional stages there are animals that win, and animals that lose.

For example, let’s look at the Canada lynx, a rare wild cat that persists on the northeastern slopes of the Cascade Mountains.  The 50 or so lynx remaining in Washington eke out a living in high mountain forests where their large feet and light body structure give them a competitive advantage in deep snow environments.  Lynx rely heavily on snowshoe hares as prey, so much so that when hare populations rise and fall, so do lynx populations, and within their range, good hare habitat generally equates to good lynx habitat.  For snowshoe hares, good habitat means forests patches with a dense understory of tree branches for food and cover, a forest structure that comes and goes as fires burn and stands progress along their successional trajectory.  Basically, the dynamic nature of lynx habitat looks something like this:  A high elevation forest patch made of lodgepole pine or spruce-fir forest burns black. Since the incinerated understory leaves nothing for hares to eat or use as cover, they avoid that patch of burned forest, and so do the lynx.  For hares and lynx, a freshly burned forest is a loss.  But the years pass, and the forest begins to regenerate.  In, say, 20 years this patch has now grown into a densely stocked stand of lodgepole pine, with some of the thickest understory cover of branches around.  Snowshoe hares abound and it becomes an excellent patch for lynx to hunt in; hares and lynx win at this habitat stage.   Forest succession continues and another 20 years pass.  By now, the trees have grown tall and the dense tree canopy blocks most of the light from reaching the forest floor.  The understory has opened up and there is no cover or food left for hares; exit hares, exit lynx.  If forest succession in this patch is not reset by another fire, the forest will remain unsuitable for hares and lynx until it ages into a mature successional stage where the canopy begins to open in places as some trees fall, allowing light back onto the forest floor and an understory layer to develop.  As an added bonus for lynx, a jumble of fallen trees within a forest patch provides excellent den sites for having kittens.  Historically, the transient suitability of various forest patches in lynx range worked because at the landscape level, there was enough habitat in the right successional stage at any given time to sustain hare and lynx populations.

Let’s add some nuance to our picture of wildlife habitat on fire-prone landscapes because how a forest burns, not just whether a forest burns, also contributes to the kind of habitat that results.  Within a single burn perimeter there is variation in how hot a fire burns so that some areas may be entirely skipped leaving islands of unburned forest.  Other areas my get a light understory burn so that the tree canopy survives but the understory is cleared, and still other areas may be burned to a crisp so that only blackened, dead trees remain.  For hares and lynx, variation in burn patterns means that there is often some usable habitat left within the fire perimeter.  Fire skips can be good hunting habitat for lynx, and even better if they are near the perimeter of the burn or surrounded by only lightly burned area so that lynx don’t have to cross vast patches of intensely burned open areas.

Lynx behavior shows us that time since burn and the configuration of burns over the landscape affect whether a patch provides good habitat.  But for every patch type on our fire-prone landscape where one species loses, other species benefit.  Take the freshly burned black patch with no understory for hares; a low-value habitat for lynx.  Not so for beetles and woodpeckers.  As fires burn and throw out giant plumes of smoke, beetles that specialize on eating dead trees detect the smoke from as far as 50km away.  The beetles swarm the area immediately after the fire in an invasion so thick that when walking through a fresh burn, the air is filled with the raspy crunching sound of their foraging.  The freshly burned forest is a win for beetles and they proliferate.  Not long after the beetle invasion, the insect-loving woodpeckers come.  In a matter of months post-burn, woodpeckers arrive in vast numbers to take advantage of the beetle invasion, another winner of the freshly blackened woods.

For every successional stage of habitat in a fire-prone landscape, there are animals that win, and animals that lose.

However, as we learned from Dr. Hessburg’s talk, the historical fire regime of the west is changing, taking us further from the patchwork landscape our wildlife evolved with.  A century of fire suppression has weakened our patchwork as trees fill in creating a homogeneous blanket across the landscape and fuels have accumulated in the absence of frequent fires so that many of our forests are tinder boxes.  What’s more, climate change is giving us hotter, drier, and windier summers.  As a result, we are seeing a dramatic shift in how fires burn trending towards more frequent, larger, and higher intensity fires.

How might this new trend in fires impact Washington wildlife dependent on a patchwork of habitat created in large part by smaller, lower intensity fires?  The answers are only beginning to be explored by science so there are many unknowns but we can look again at our lynx example to get an idea of potential impacts.

An increase in catastrophic fires means that lynx range is shifting from a patchwork of different-age forest stands with enough in the right successional stage to support a lynx population toward a more homogenous landscape of recently burned areas.  And within these burned areas, hotter fires mean fewer fireskips and lightly burned areas for lynx to make the best of.  Hotter fires and drier summers also mean slower forest regeneration.

Under this fire regime, lynx don’t lose a patch of forest in a small fire and remain buffered by other patches of suitable habitat within the landscape.  Instead, lynx habitat declines at the landscape level as the balance of the patchwork shifts towards more recently burned area.  There is no longer something for everyone on the landscape and in this case, lynx populations suffer.  Hopefully, lynx will recover as these vast swaths of burn eventually regenerate, but this may depend on whether we can reinstate the patchwork to help regulate catastrophic fires so that lynx habitat is not perpetually reburning giant tracts of forest before they can regrow into the dense forests with thick understories that snowshoe hares love.

Historically, our environment supported a rich array of wildlife; there was something for everyone, even if a species’ winning patches shifted across space and time as they burned and re-grew.  And so we find that there is another “power in the patchwork”:  not only does a patchwork created by wildfire regulate wildfire, it also creates a diversity of habitats to support a variety of wildlife.

Stay tuned for our next instalment of Embers and Ecology as we examine how wildfires effect mule deer.   We’ll explore beyond the old rule of thumb that recent burns mean lots of deer, diving into what is actually a complex and nuanced subject.

Be sure to return to the Washington chapter page and our social media for more wildfire education and updates.

share on
See other pages related to Washington BHA Washington News embers ecology
Get the latest news and stories, right to your inbox.
Search
Local Chapters