Unmanned Aerial Vehicle Systems (commonly called “drones”) are increasingly important in the military and have high potential to contribute to the fields of wildlife biology, search-and-rescue, agriculture and many other applications. However, in private hands there is small but growing interest in using these highly sophisticated remote-controlled aircraft to scout, stalk and hunt big game. Backcountry Hunters & Anglers believes this technology represents a widespread opportunity for abuse, and if not regulated early poses a significant threat to fair chase hunting and fair distribution of hunting opportunity.

That’s why Wyoming Backcountry Hunters & Anglers is working with Wyoming Fish & Game to ensure regulations be put in place which prohibit the use of drones for hunting or scouting game species. Currently, Wyoming has regulations (Chapter 2, Section 12) which state that “No person shall use any aircraft to aide in the taking Wyoming wildlife, except predatory animals, whether by spotting or locating wildlife, communicating with any person attempting to take wildlife, or provide any other aid to any person taking the wildlife within twenty-four (24) hours of being airborne.” 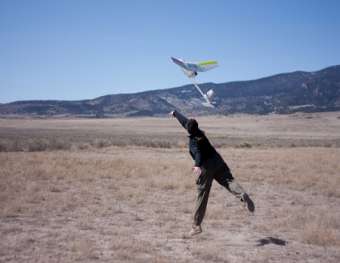 While enforcing the 24 hour rule for use of aircraft is in some cases possible, applying this rule to small and extremely mobile, transferable and accessible drones is not. Additionally, big questions remain about whether or not “drones” even qualify as an aircraft. The Federal Aviation Authority (FAA) currently does not consider personal drones operated under 500 feet as an “aircraft” and there is a growing interest by industry leaders to further limit rules on drone operation.

Wyoming Backcountry Hunters & Anglers is advocating for regulations which are broader than the regulations referenced above, and which include:

Want to help Wyoming BHA ensure drones are banned for hunting and scouting? Contact us here to get involved.

About Wyoming BHA
share on
See other posts related to Wyoming BHA Wyoming Issues
Get the latest news and stories, right to your inbox.
Search
Local Chapters