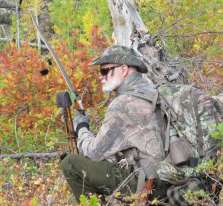 David Petersen has been a hunter since he was eight, a passionate traditional bowhunter since his first successful deer hunt as a teen, and a bona fide “elkoholic” since settling in rural Colorado in 1980. Through the years, Petersen has also been a Marine Corps helicopter pilot, Colorado Field Director for Trout Unlimited’s public lands conservation and hunter outreach programs, a magazine editor and prolific author. In 1995, David founded and chaired Colorado BHA, the first BHA state chapter, while serving on the national board of directors. In 2011 David was honored as Sportsman-Conservationist of the Year by the Colorado Wildlife Federation. In 2012 CWF added to that honor with a Lifetime Achievement Award. In 2013, Petersen received the BHA Chairman’s Award for outstanding service to the group. From the press release for that honor: “David Petersen is a hunter-conservationist who has been actively involved in BHA since the first year (2004) it was formed. David’s many books and other writings related to hunting and conservation form the ethical foundation of BHA.” For the past 30 years and more David and Carolyn Petersen have lived in a self-built cabin near Durango.