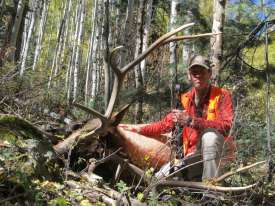 David grew up in the small northern Minnesota town of Grand Rapids and started hunting ruffed grouse when he was eleven years old. At twelve he hunted deer for the first time, and killed one the next fall with a Ruger .44 Magnum rifle handed down to him by his grandfather.

In college, David was offered an Air Force ROTC scholarship at the University of Minnesota-Duluth and went on to graduate with a BA in political science and second lieutenant bars. After completing his service and additional schooling, David moved to Colorado. In addition to his volunteer work with CO BHA, he is also a life member of the Minnesota Deer Hunters Association, and a world-class mountaineer.