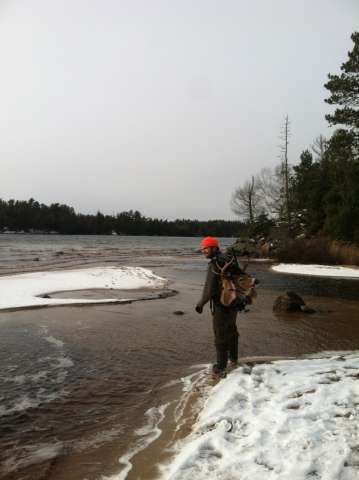 The following op-ed by MN BHA Board Member, David Lien was originally published in the Duluth News Tribune, February 1, 2014.

PolyMet is one of several companies considering mining operations in Northeastern Minnesota to extract sulfide metals from the so-calledDuluth Complex of rock. During a recent public meeting in Duluth on the NorthMet/PolyMet Supplemental Draft Environmental Impact Statement, an estimated 1,300 people packed the room.

Although pro-sulfide-mining interests reportedly sent seven busloads of sulfide-mining supporters, apparently to make a show of force, about two-thirds of the testimony was from mine opponents. Hunters and anglers are particularly concerned about the impacts of sulfide mining. “I’m an outdoorsman, and I’m concerned about water quality,” said Jim Juntti of Barnum, according to the News Tribune’s coverage. “I asked them what the plan is if something happens and that (tailings basin) opens up and things go bad … They didn’t really have an answer for me.”

That’s because sulfide-mining companies are bending over to gloss over (or to cover up) the fact that the generation of acid mine drainage will continue as long as sulfides, water and air mix. No new technologies have emerged that can stop the chemical reaction once it begins.

And mining companies know that, as stated in December by the tribal cooperating agencies of northern Minnesota: “Minnesota has existed for 155 years (and) the U.S. for 237 years. The notion that (cleanup) instruments will be available 500 years from now is not believable.”

Due in part to the poisoned waterways and watersheds left behind by sulfide-mining companies, regions where such mining takes place are oftentimes some of the most impoverished in the nation. As explained on Minnesota Public Radio by University of Montana economist Thomas Power: “We have hundreds of years of history with mining. It’s staring us in the face on the Iron Range or the Upper Peninsula or Butte, Mont. How is it that despite the high wages, and despite the incredible wealth pulled out of the ground, these areas are not prosperous?”

Sulfide mining and prosperity are polar opposites, in part, because some 12,000 miles of rivers and streams and more than 180,000 acres of lakes and reservoirs in this nation have been polluted by sulfide mining. The Environmental Protection Agency estimates it would cost $50 billion to clean up the sulfide mines in Alaska, in 11 western states, and in South Dakota where mining companies walked away from their environmental obligations.

As explained by Minnesota Backcountry Hunter & Anglers member (and former miner) Bob Tammen in the News Tribune last February: “We don’t have a healthy main street along 100 miles of the Mesabi Range. If mining brings prosperity, how come our communities don’t have it?”

In a few months, winter will turn to spring and Minnesota’s anglers and other outdoorsmen and women will prepare for another fishing (and then hunting) season. If we venture into northern Minnesota’s Iron Range, we probably won’t notice any signs of a booming economy until arriving in places like Ely, where one local resident explained what’s at stake: “In Ely in the summer you would think that you’re at the Mall of America, there are so many people. I visit Mountain Iron on a fairly regular basis, right on the edge of a major mine. All you see is a crumbling community.”

David A. Lien of Colorado Springs, Colo., is a native of Grand Rapids and is co-chairman of the Minnesota Backcountry Hunters and Anglers (backcountry hunters.org).