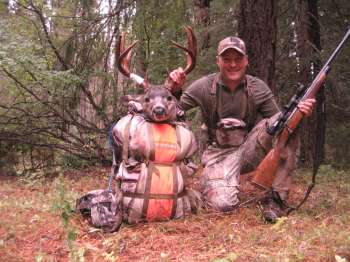 Karl Findling could be a poster boy for public lands and our access to them. Findling has hunted and fished Oregon’s public lands for four decades and his passion for their preservation runs deep. Few people have covered as much of the state as Findling. Whether it’s the SE Desert region, Eastern Mountains, the Central Region, Cascade Mountains, or Western Oregon, Karl knows Oregon from a boots-on-the-ground perspective better than most of us. To help fuel his passion for wild backcountry, Karl is a longtime Captain in the Bend Fire Department. On the side, he created Oregon Pack Works which manufactures interchangeable modular pack systems for sportsmen and markets them worldwide. Oregon Pack Works is one of thousands of businesses which help drive a 646 billion dollar national outdoor recreation economy. And, much of that economy is fueled by the legacy of public lands and our access to them.

“We can be in public lands and not see another soul. That feeds my soul. That’s why I go where I go and do what I do and enjoy what I do. We wouldn’t be where we are without public lands”, says Findling. Outdoor recreation fuels 141,000 jobs in Oregon which results in nearly $13 billion dollars in consumer spending statewide, according to the Outdoor Industry Association.

Findling’s business is one cog in the wheel driving this economic engine in Oregon and the nation. Findling understands this and acknowledges that he “probably wouldn’t be in business” if it weren’t for the legacy of public lands and the Land and Water Conservation Fund which helps fuel our access to them. He is a staunch supporter of LWCF which has funded over $300 million in projects in Oregon since inception. The fund, established in 1964 is supposed to be funded at $900 million annually, but rarely has reached that level. Congressional leaders have just agreed to keep the national level of funding at $300 million for the second year in a row. S. 338 would guarantee full and permanent funding of LWCF and was introduced last year by Senator Ron Wyden of Oregon but needs more Congressional support for passage. LWCF is not funded by taxpayer dollars. It’s funded by offshore drilling fees and Congress has historically diverted these fees earmarked for the fund to other purposes.

In the next few weeks, we will learn what projects in Oregon and other states will be considered for funding by LWCF. For a full listing of projects funded by LWCF in Oregon since the fund began, check here.

Please encourage your members of Congress to support full and permanent funding of LWCF. It helps drive the outdoor economic engine and preserves access to public lands that we all enjoy. Thank you.