Conservation fund's future is in jeopardy due to budget cuts

The following article was written by Oregon BHA Co-Chair, Ed Putnam and recently appeared in the Bend Bulletin, here. 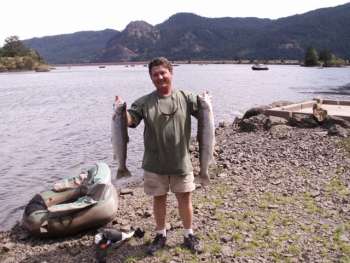 Oregon is blessed with great natural beauty and a diversity of habitats. Our state has many federal, state and local parks and public lands that improve the quality of life for residents. Oregon is highly valued for the miles of public stream access for fishing and boating. Thousands of acres of backcountry provide excellent hunting opportunities for mule deer, bear, black tail deer, antelope and elk. National wildlife refuges have fantastic waterfowl hunting and wildlife viewing. Oregon has miles of trails, local parks and playgrounds, and so many other places to get active outside.

If you've ever recreated on any of these lands, chances are you've taken advantage of a little-known federal program called the Land & Water Conservation Fund (LWCF). Created 50 years ago, LWCF uses revenues from a non-renewable resource (off-shore oil and gas development) for the conservation of important lands for outdoor recreation. Since 1965, funds from the program have conserved treasured places in Oregon and across the nation. Using no taxpayer dollars, LWCF leverages our state and local conservation dollars to maximize the return on our investment.

But what you may not realize is that LWCF is at risk in the United States Congress. LWCF is supposed to receive $900 million each year from these offshore oil and gas revenues. But almost every year Congress diverts these funds from their intended purpose. This year, the House Appropriations Committee has decided to zero out the program, a move that places a true federal success story in jeopardy.

In Oregon, the list of places that LWCF has touched is impressive. Federal lands within the Willamette, Siuslaw and Mount Hood national forests, the Rogue Wild and Scenic River as well as many other parks, forests and refuges throughout the state were acquired using this funding tool. LWCF also helps support recreation with trail improvement and boating access at numerous state and local parks. In fiscal year 2014, Oregon has five projects competing for LWCF funding. They include expansion of the Cascade Siskiyou National Monument in Southern Oregon, expansion and completion of the Pacific Crest Trail in Southern Oregon, expansion of the Gilchrist Forest in South Central Oregon, land acquisition on the Crooked River in Central Oregon providing better fishing and rafting access, and preservation of the historic Nez Perce Trail near Joseph in Northeast Oregon.

These public lands, if managed well, are a perpetual economic resource fueling a growing outdoor recreational economy that benefits almost every town and city in the state. The Outdoor Industry Association reports that outdoor recreation generates $12.8 billion in consumer spending in Oregon and contributes $955 million in state and local taxes. Outdoor recreation also supports more than 141,000 jobs in the state, and these economic benefits typically help our rural communities — the places that host these valuable recreation lands — the most.

Sens. Ron Wyden and Jeff Merkley have been strong supporters of LWCF and, now more than ever, we need their leadership in Congress. Both senators have cosponsored a bipartisan bill, SB 338, to ensure honest budgeting will keep this oil and gas money in its rightful place. Wyden also leads the Energy and Natural Resources committee that is taking a close look at how these oil and gas receipts are used.
Dedicating funds for LWCF will ensure that we no longer have to face future congresses that arbitrarily choose to zero out funding for a program that benefits all of America.

— Ed Putnam lives in Bend and is the Oregon co-chair for Backcountry Hunters & Anglers.