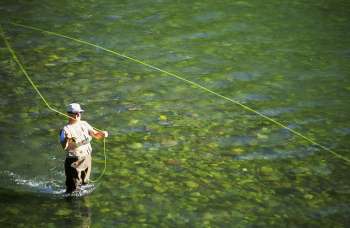 MISSOULA, Mont. – Sportsmen from Montana and across the country are speaking out in support of bipartisan legislation that would withdraw from future minerals development 362,000 acres of America’s most valuable hunting and fishing lands located near Glacier National Park in Montana.

Sportsmen thanked Daines for his leadership and urged the House to advance the legislation.

“We appreciate Congressman Daines’ commitment to safeguarding Montana’s renowned fish and wildlife habitat – and our outdoors heritage,” said Joel Webster, director of the TRCP Center for Western Lands and a Missoula resident. “Hunting and fishing are big business in Montana – part of our state’s identity – and the fact that the entire Montana congressional delegation supports conservation of the North Fork of the Flathead River sends a powerful message. We urge Congress to advance these companion bills as soon as practicable.”

The North Fork of the Flathead River is one of Montana’s wild and scenic trout streams, and the surrounding valley encompasses some of North America’s richest big game habitat.

“For more than 30 years protecting fish and wildlife habitat in the North Fork has been a priority for the Montana Wildlife Federation,” said Skip Kowalski, MWF president. “Montana’s public lands support world-class hunting and fishing, and we look forward to working with Representative Daines to make sure we keep it that way.”

The North Fork Watershed Protection Act would withdraw specific lands within the North Fork of the Flathead River Valley from future oil and gas leasing and development, hard-rock minerals development and geothermal development. With its wild trout, moose, elk, bears and deer, the region offers outstanding fish and wildlife habitat and is a destination for hunters and anglers. The North Fork of the Flathead River forms the western boundary of Glacier National Park, one of America’s largest, most visited parks.

“The effort to conserve the North Fork is one example of Montanans coming together to develop homegrown solutions,” said Corey Fisher, energy team lead with Trout Unlimited and a Missoulian. “Working together is how Montanans do things, and we appreciate Congressman Daines’ commitment to advancing this collaborative effort.”

“The North Fork of the Flathead River is among the greatest of ‘America’s great outdoors,’” said Ben Long, co-chair of Backcountry Hunters & Anglers and Kalispell resident. “From the blue-ribbon trout stream to habitat for elk, moose, bear and deer, it is invaluable both to the people of Montana and all Americans. We applaud Representative Steve Daines, and the entire Montana congressional delegation, for working across party lines to keep the North Fork special. Our kids and grandkids will remember this and thank you for it.”

The North Fork Watershed Protection Act also would satisfy a 2010 agreement between Montana and British Columbia whereby both governments agreed to protect their portions of the watershed from mineral development. British Columbia already has taken steps to ensure conservation of areas within its boundaries.