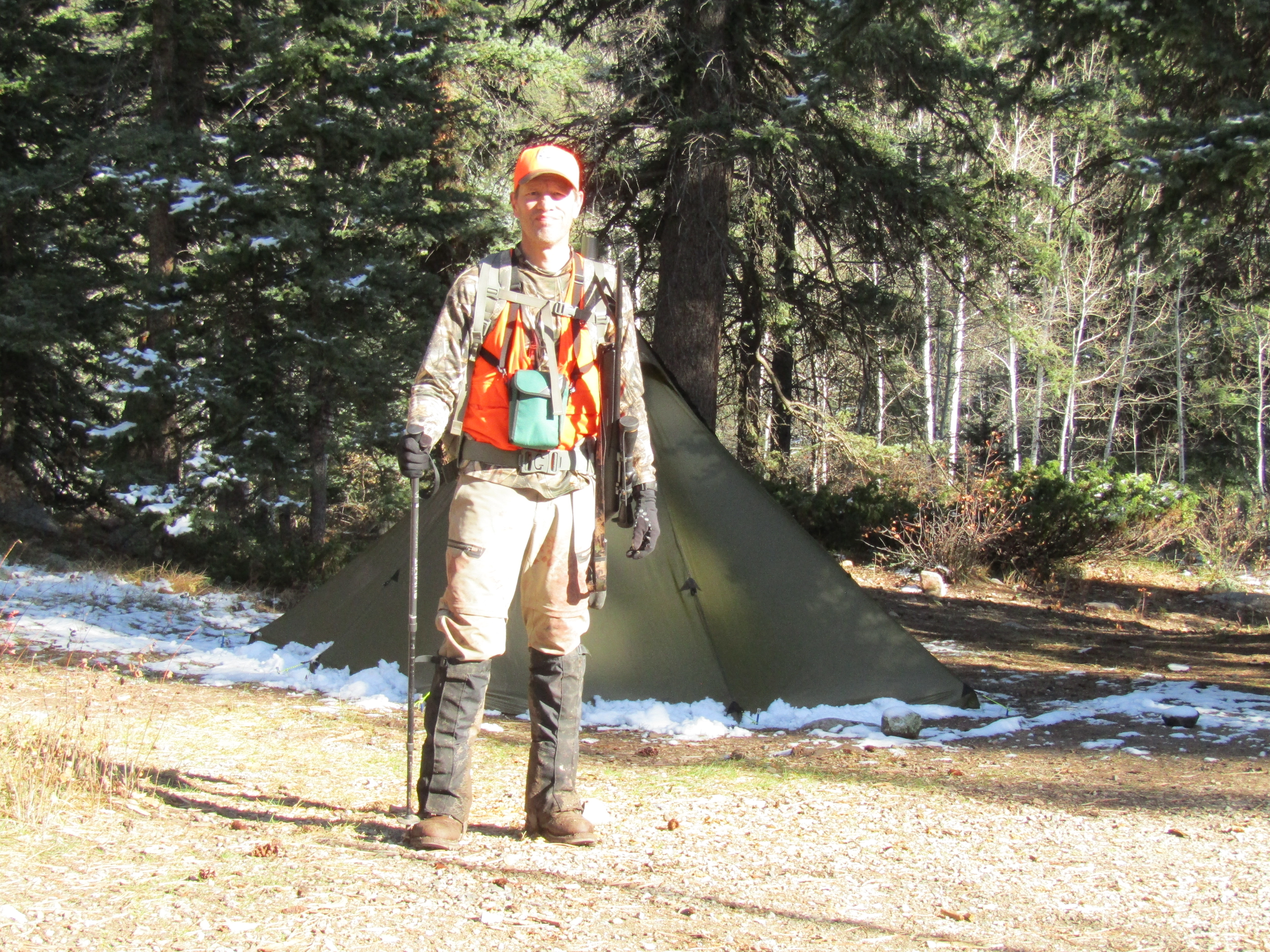 A Colorado Backcountry Hunters & Anglers (BHA) member recently asked me about hunting in southwest Colorado’s San Juan Mountains, where I’ve been stalking elk for over a decade now. Unfortunately, elk numbers are alarmingly low in some areas and there have been several years when I haven’t seen a single elk. Perhaps it’s because everyone in southwest Colorado seems to play on public lands.

Habitat fragmentation, disruption by mountain bikers, ATV riders, backcountry skiers and hikers are all part of the equation. “People move here for our outdoor opportunities. Climbers, hikers, bikers and skiers are everywhere in the mountains at all times of the year,” said Durango elk hunter Andrew Gulliford (in the 10/10/20 Durango Herald). “Elk, which are private animals preferring quiet meadows and south-facing winter hillsides, are constantly disturbed.”[1]

An award-winning author and editor, Andrew is also a professor of history and environmental studies at Fort Lewis College. “No wonder in our region that there are only 20 elk calves that survive to adulthood born from 100 cow elk,” he added. “Statistically, at least half the calves should live, not a mere 20%. There is too much stress. Our advanced technologies for hunting and outdoor recreation mean that we are constantly in the backcountry. Elk have no respite.”[2]

As a result, sometimes southwest Colorado elk hunting can seem akin to hunting for a needle in a haystack. Despite initially planning to hunt elsewhere, I didn’t set aside enough time to scout new hunting locales. Hence, during October I was back in the San Juan Mountains (for second rifle season: Oct. 24 – Nov. 1) determined to hunt light and hike far to increase my odds of putting meat in the freezer. A summary of this 4-day hunt and 2½-day pack out follows. 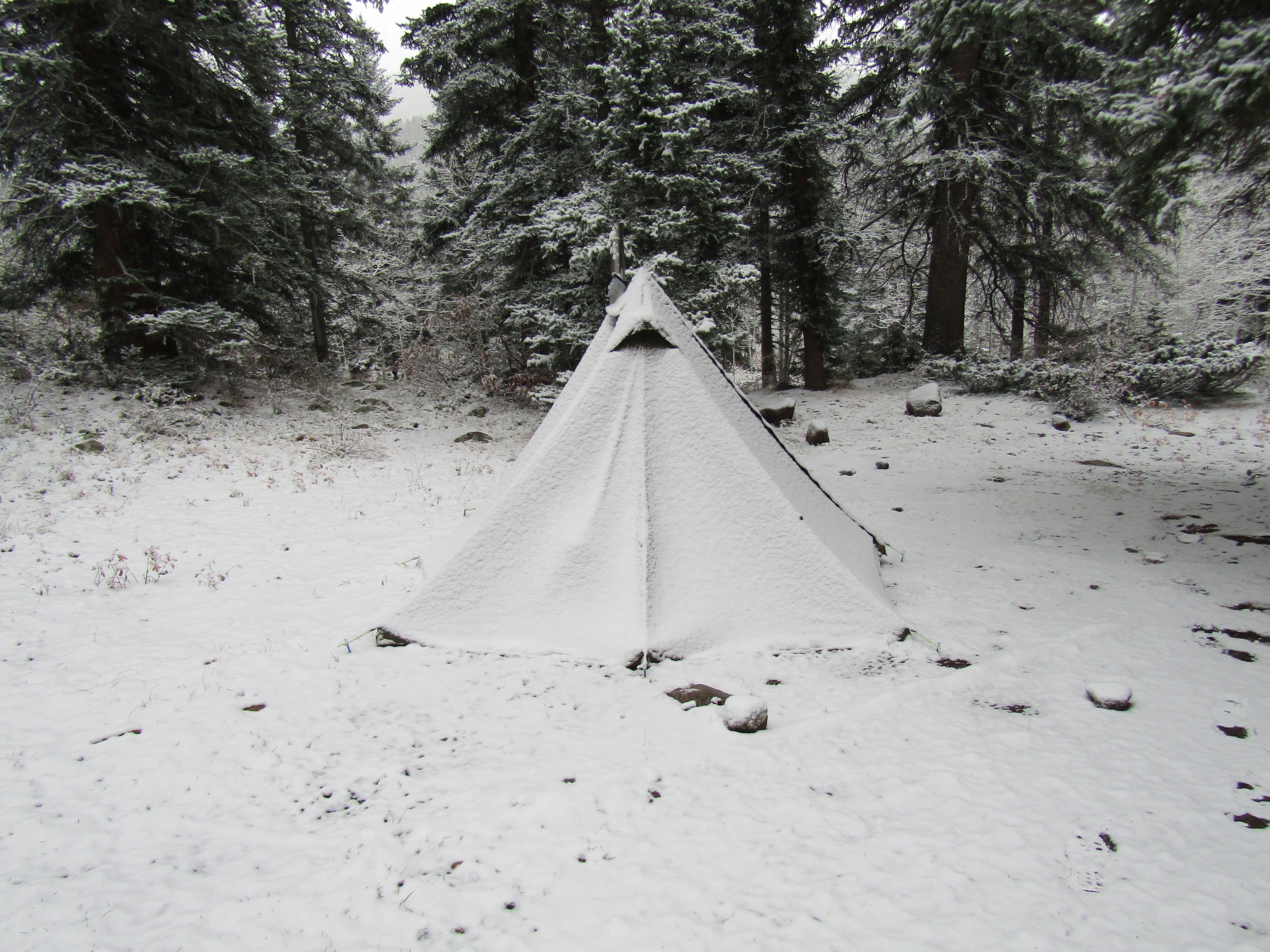 Hiked 10.8 miles through 4,200 feet of elevation gain encountering a half-dozen mule deer first. Then, at 9:30 a.m. bugling bulls started sounding off amongst a herd of 30-plus elk moving at a walk 500-600 yards away. They were headed into steep, timbered territory to bed for the day.

After the herd settled in, I hiked downwind to a perch above their location, but guessed that trying to stalk them in the noisy, dead leaf-covered terrain would likely alert the herd well before a shot opportunity presented itself. The other option was to intercept them when/if they emerged to feed at dusk.

At dark the elk were still bedded down, the wind picked up and light rain combined with snow hastened my return to camp. During the hike, I had plenty of time to second-guess my decision not to go after these elk when I had the chance.

Hiked nearly 5 miles (round-trip) through the falling snow, but fingertips were numb and rifle action frozen (i.e., melting snow froze and locked up the action) by sunup. Back to camp for the day with plans to return in the morning. 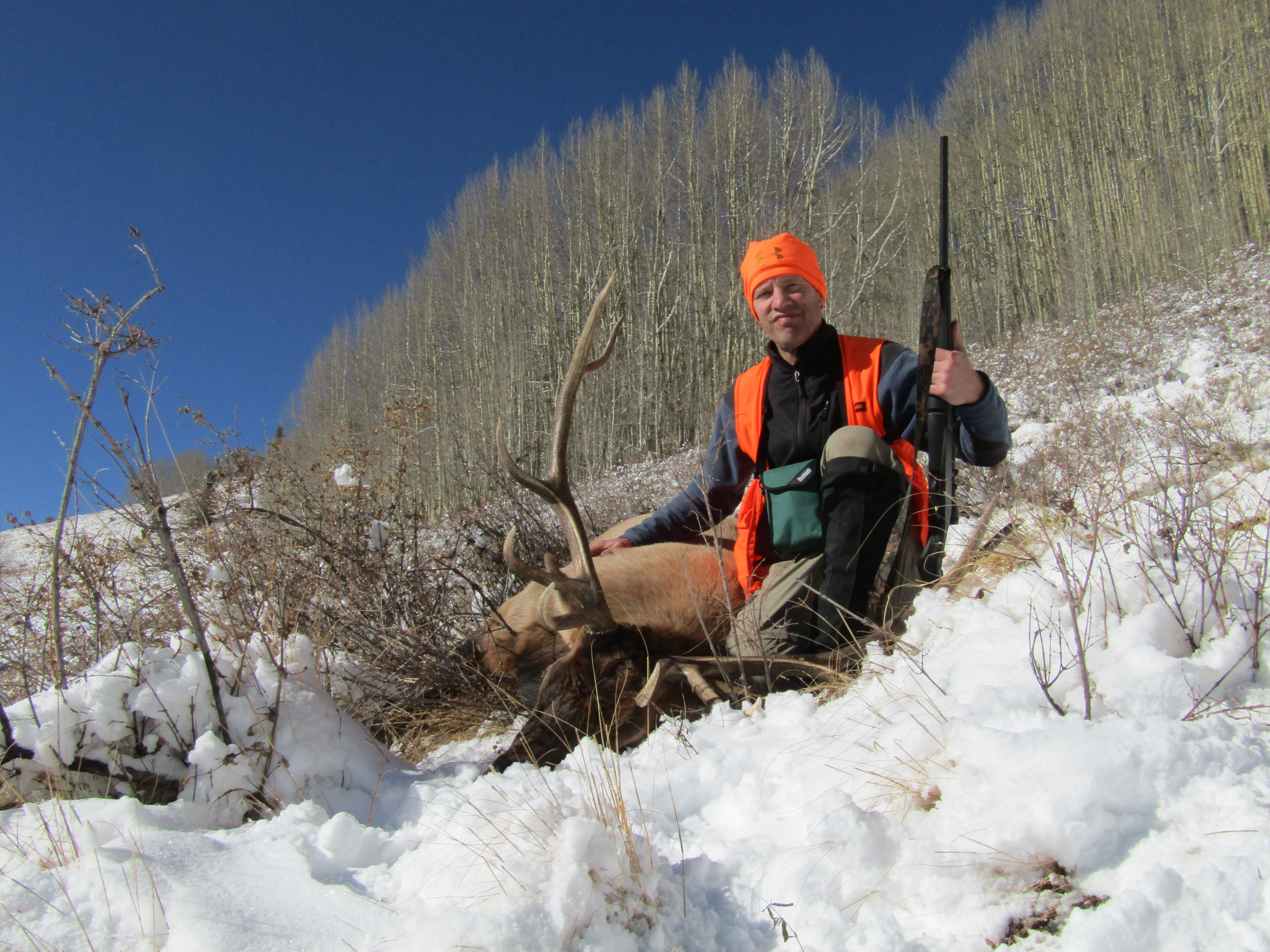 Several inches of fresh snow revealed that elk had moved out to feed. Walking slowly along a series of aspen groves, spotted two bulls (8:45 a.m.) about 250 yards away silhouetted against the white mountainside, but was in turn spotted. Stopped for 10 minutes before resuming a slow walk/stalk along the aspens.

Later (9:30 a.m.), the sound of a hoof or antler hitting a branch focused my attention up-slope where an elk (bull) appeared some 200 yards out moving down-slope at a quick trot. One shot and he disappeared from view. After a few minutes, I moved cautiously forward preparing for a follow-up shot, but the bull was lying motionless.

At the time/place of this kill, I had hiked 24 miles through 9,500 ft. of elevation gain during four days of hunting. To get the meat out, I hiked an additional 27 miles through 8,000 ft. of elevation gain over 2½ days. It was my hardest (albeit most satisfying) elk hunt to date, resulting in a side benefit of losing seven pounds before the holidays.

About 15 years ago, there were anywhere from 50 to 60 calves for every 100 cows in southwest Colorado, considered a strong balance. In recent years, however, that number has fallen to about 20 calves per every 100 cows. Although Colorado Parks and Wildlife cut rifle cow tags by 75 percent in 2018, it apparently hasn’t shown the desired effect.[3]

Elk intolerance (as indicated by the distances they maintained) was highest for ATV riding, followed by mountain biking. Some people participating in the study reported that they could see elk from the trails. However, telemetry data revealed that the elk that were seen represented a small por­tion of the larger population: most of the elk had retreated far enough to be hidden from view.[5]

Combined with the upward trend in both numbers of people and their outdoor recreation on public lands, southwest Colorado elk hunting is becoming, at best, a hard(er) hunting proposition. Jock Conyngham, an elk hunter and BHA member from Montana, passed along this observation after hearing about my hunt: “As my son said to me this year, ‘I know there are a lot of calories in an elk, but I think this was a wash.’” Agreed, but also (Jock would agree) a worthwhile trade.

In an August 2020 Colorado Outdoors story, “Colorado Elk Hunting: Showing Up (Physically Fit) Is Half The Battle (& The Easy Half),” I wrote about getting in shape for elk hunting, “so that when the stars align and I’m in the right place at the right time, I’m also alert and not too exhausted to shoot straight … If you aren’t physically prepared and in mountaineering shape for elk hunting, your chance for a shot opportunity falls precipitously. Nothing kills your chances of killing a bull like physically not being able to get to one.”[6]

David Lien is a former Air Force officer and co-chairman of the Colorado Backcountry Hunters & Anglers. He’s the author of “Hunting for Experience: Tales of Hunting & Habitat Conservation” and during 2014 was recognized by Field & Stream as a “Hero of Conservation.”[7]

[3] Jonathan Romeo. “Where have all the elk gone? In Southwest Colorado, herds show distressing signs.” The Durango Herald: 11/15/18. https://durangoherald.com/articles/250613

[6] “Colorado Elk Hunting: Showing Up (Physically Fit) Is Half The Battle (& The Easy Half).” Backcountry Hunters & Anglers: 8/13/20. https://www.backcountryhunters.org/colorado_elk_hunting_showing_up