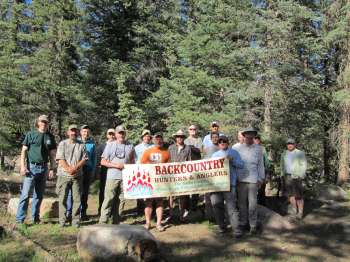 Colorado BHA held its fifth annual Rendezvous during June 7-9. A group of over 20 attendees from around the state (and country) set camp in southwest Colorado’s San Juan National Forest. Camp was located on the Florida River, northeast of Durango near the Weminuche Wilderness Area, Colorado’s largest (488,210 acres) wilderness. BHA members came from as far away as New York State, along with representatives from the New Mexico and Utah BHA chapters, to join us.

It was a relaxed, mostly unstructured “get acquainted” weekend with some serious conversation and plenty of laughter both nights. During the day Saturday, folks dispersed to go hiking and fishing in the nearby Weminuche Wilderness and surrounding areas, returning during the late afternoon for an informal chapter meeting to discuss where we’ve been, where we’re going, and to recognize the outstanding contributions of those members who have been instrumental in Colorado BHA’s recent successes.

Members who were recognized included: Bob Marion, who received the national BHA Aldo Leopold Award (in 2012) for his habitat protection efforts; Craig Grother, who received the national Aldo Leopold Award in 2013; and, Colorado BHA founder David Petersen, who was the national BHA Chairman’s (Mike Beagle) Award recipient in 2013 for his sustained efforts at promoting and growing BHA’s overall visibility and “boots-on-the-ground” effectiveness.

The weather was sunny and warm all weekend, and after the Saturday afternoon chapter meeting we commenced with a group wild game cookout that included venison roast, salmon steaks, antelope burgers, elk steaks, and bison. Since the Colorado BHA chapter was founded by David Petersen in 2005, we’ve grown to nearly 250 members along with 19 National Forest Habitat Watchmen serving as our “eyes and ears” on 10 of 11 Colorado National Forests, and 12 Life Members.

And as BHA founder Mike Beagle said, “We will continue to be a voice for core values of solitude, challenge, freedom and tradition so badly needed in the world where outdoor pursuits risk becoming more about selling products and technology instead of exercising skill and woodcraft. BHA is getting better and better. The best is yet to come.”

More photos from the 2013 CO Rendezvous can be found here, or on our facebook page.