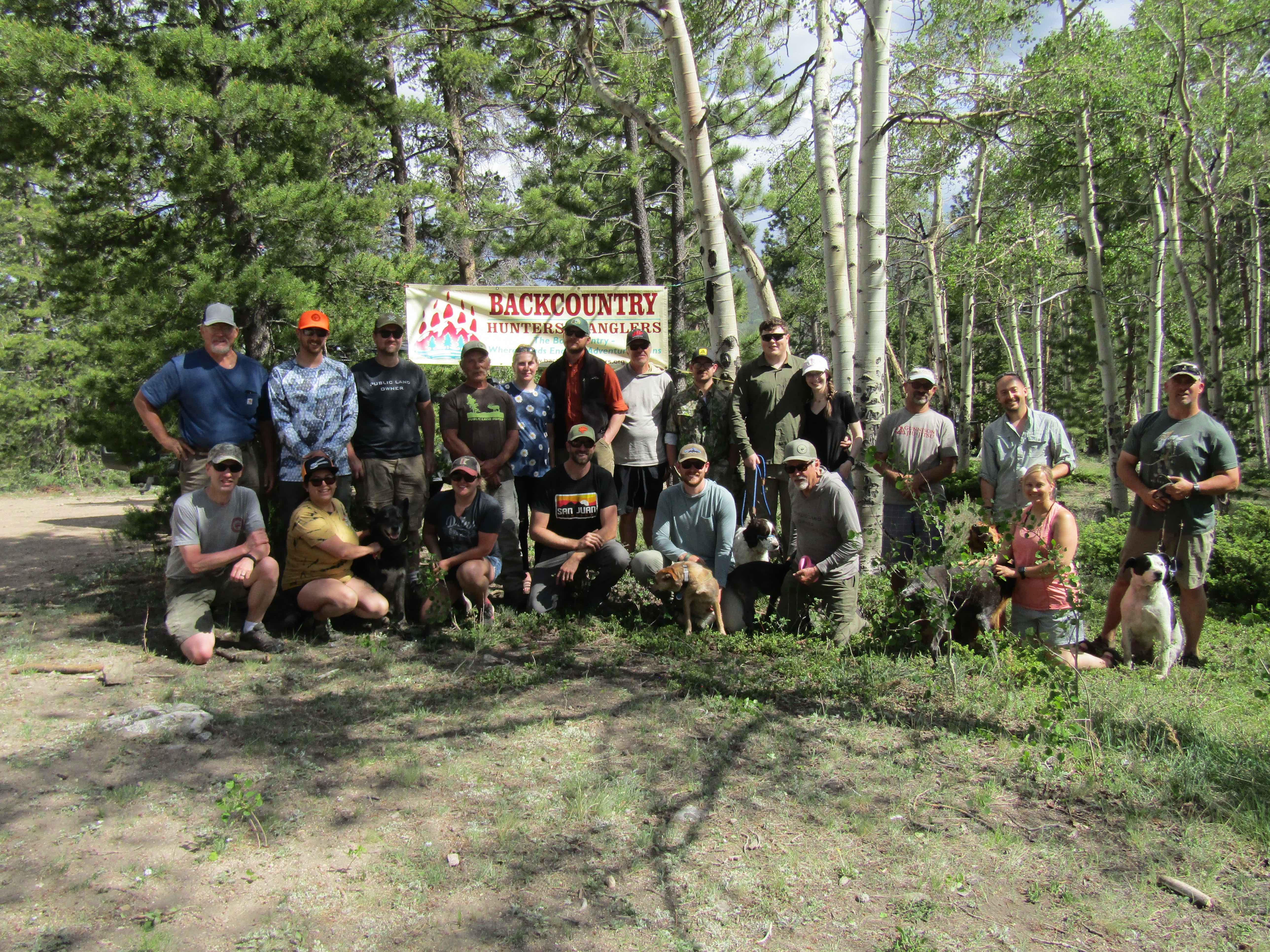 The Colorado Backcountry Hunters & Anglers (BHA) chapter held their 13th Annual Rendezvous in the San Isabel National Forest west of Salida/Poncha Springs during June. A group of 20-to-30 hunters and anglers from around the state set up camp in a high-mountain meadow (known locally as the “goat wadi”) covering about six acres at 10,000 feet in the Sawatch Range.

Bill served aboard the minesweeper YMS Yancy in the Pacific theater.[2] Following the war he moved to Denver (in 1949), where he became an explosives engineer. He developed the explosive designs to initiate stage separation on the space program’s Titan rockets. He later worked on explosive designs for advanced military projects.[3]

In 1968, Bill and his wife Frances moved to Salida and purchased the Wagon Wheel Guest Ranch. During 2018 they celebrated their 50th year owning and operating the Ranch. Bill was also an avid hunter-angler and a champion of wilderness and wildlife.[4] He led the charge for Colorado BHA, along with many others, to get Browns Canyon (north of Salida) designated as a national monument.[5]

During 2015 we recognized Bill with an award for his “unwavering commitment, spanning ten-plus years, to helping protect low-elevation big game habitat in the Browns Canyon area near Salida, which was designated a national monument in 2015.”[6] In Bill’s words: “In the simplest terms, without suitable habitat we will have no game; without game, we will have no hunting; without hunting, a precious heritage of our past will be lost forever.”[7]

On Saturday (June 11), we dispersed to go hiking and fishing, returning mid-afternoon for an informative Q&A session with Colorado Parks and Wildlife (CPW) Area Wildlife Manager Sean Shepherd (Area 13-Salida). Sean started working for Colorado State Parks in 2000, before being hired by CPW as a region supervisor at Arkansas Headwaters Recreation Area in 2005. Later, he was transferred to Summit County, but returned to work out of the Salida CPW office in 2013.[8]

This wild game smorgasbord is an example/indicator of the breadth and depth of hunting and angling opportunities BHA is working to protect and perpetuate across Colorado and the continent, none of which would be possible without the dedication of our boots on the ground members. From the start BHA has been a quality over quantity outfit. As a result, we punch well above our weight class.[9]

And nothing breeds success like success. Since the Colorado BHA chapter was founded by David “Elkheart” Petersen (a former U.S. Marine Corps helicopter pilot) in 2005 (the first official BHA chapter), our membership has grown considerably. For example, in June 2016 (when we last set up camp at the goat wadi) we had about 400 members. Today, we have over 2,000!

“For me, it was always super simple,” David Petersen said. “If you want to hunt, first you have to have animals to hunt. And if you want animals, first they’ve got to have habitat to live in. So, if you’re not trying to protect habitat and improve it and increase it, then you’re working against yourself as a hunter. It doesn’t have to be any spiritual, tree-hugging thing. It’s a very practical way to take care of yourself.”[10]

“Roosevelt was not only speaking to hunters, of course, but to all members of society,” Sports Afield contributor Shane Mahoney said. “Wildlife, in his view, was to be protected by a fortress of the concerned—an army of men and women who would resist the destruction of wild nature and preserve it.”[12] Because of Teddy’s Roosevelt’s leadership, America’s public lands truly became the “estate” of the average American.[13]

And as BHA founder Mike Beagle (a former U.S. Army field artillery officer) said: “We will continue to be a voice for core values of solitude, challenge, freedom and tradition so badly needed in the world where outdoor pursuits risk becoming more about selling products and technology instead of exercising skill and woodcraft. BHA is getting better and better. The best is yet to come.”[14]

Thank you, Bill, Mike, Shane, Land, Teddy, David, and Sean for taking the initiative and working tirelessly to protect our wild public lands, waters, and wildlife for future generations of hunters, anglers and other outdoorsmen and women. We’ll close with an appropriate quote from Bill Sustrich: “The fact is, nothing yet created by mankind can offer the degree of wildlife refuge as that provided by wilderness designation.”[16] Wildlands and wildlife need many more like you Bill! Rest in peace.

Founded by Mike Beagle, a former U.S. Army field artillery officer, and formed around an Oregon campfire, in 2004, Backcountry Hunters & Anglers is the voice for our nation’s wild public lands, waters and wildlife. With over 30,000 members spread out across all 50 states and 13 Canadian provinces and territories—including chapters in 48 states, two Canadian provinces and one territory, and Washington, D.C.—BHA brings an authentic, informed, boots-on-the-ground voice to the conservation of public lands. Since the Colorado BHA chapter was founded by David Petersen (a former U.S. Marine Corps helicopter pilot) in 2005 (the first official BHA chapter), they’ve grown their boots-on-the-ground presence to some 2,000 dedicated hunters and anglers.