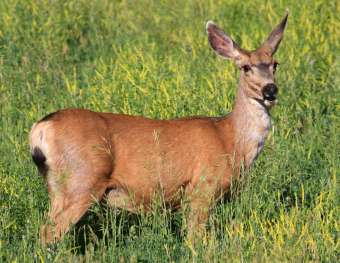 The following comments were submitted by CO BHA in regards to the CO Parks and Wildlife's Draft Mule Deer Strategy.

TO:  Colorado Parks and Wildlife

Please consider the following comments on behalf of the Colorado Chapter of Backcountry Hunters & Anglers in regards to the West Slope Mule Deer Strategy - Draft Aug.9, 2014.

Backcountry Hunters & Anglers is a grassroots sportsmen conservation organization dedicated to serving as a voice for our wild public lands, waters and wildlife.  We support wildlife and land management plans that are scientifically-based and which balance social demands with biological needs.  Accordingly, we felt compelled to comment on the current effort to draft a West Slope Mule Deer Strategy.

We applaud CPW’s effort, with the able assistance of the independent Keystone Center to carefully gather and analyze comments, concerns, opinions, personal observations and even theories from a variety of stakeholders including sportsmen, outfitters, livestock industry representatives and landowners from around the state regarding the decline of mule deer on the Western Slope of Colorado.  No doubt there is great value in accurately identifying major concerns and opinions of different stakeholders in different regions of the state.  Management decisions regarding wildlife populations need to be made with prudent consideration of social desires and demands.

However, BHA believes that landscape and wildlife management plans must be based first and foremost on the best scientific information available.  CPW and other state and federal agencies have a significant body of credible scientific studies that elucidate the biology, population dynamics, migratory patterns, nutritional requirements and effect of predation, disease and automobile accidents on mule deer in Colorado and surrounding states.  BHA believes that the Wildlife Commission needs to seek the best available scientific consensus from CPW biologists and others with expertise in mule deer population fluctuations in western Colorado and on the adjacent western slope landscapes.  In conjunction with the current extensive effort to gather and analyze public input through the Keystone Center, we urge CPW to gather, analyze and distill current scientific studies to the level of management recommendations for the Commission to consider as part of the decision making process.  At a minimum we urge CPW to present the science behind each of the seven currently proposed strategic priorities to accomplish the goal of stabilizing, sustaining and increasing mule deer populations in Colorado.

The seven strategic priorities presented in the current draft of the West Slope Mule Deer Strategy come from a blend of input from the CPW internal summit work in April 2013, public input as compiled by the Keystone Center August 2014, and further synthesis by CPW.  We appreciate this systematic approach as part of a process to make decisions that attempt to balance the science of managing mule deer populations with social/economic demands.  However, BHA is aware of how political this process can become and how CPW must remember its first and highest commitment should be to “perpetuate the wildlife resources of the state”.

BHA stands eager to comment more specifically on this process as it unfolds but as a general platform regarding wildlife populations and, specifically, mule deer management we believe that:

The following are our comments on each strategic priority.  We anticipate that the devil will be in the details in all of these priorities and we stand ready to comment further as things progress.

Strategic Priority #1:  BHA agrees in principle with landscape-scale habitat management to improve or at least maintain habitat quality.   However CPW needs to be realistic in projecting sustainable deer populations in various regions.  For example, largely as a result of policies that have favored fire suppression some regions of a landscape may be in a natural stage of succession that will not easily support more deer.  We support restoring the natural disturbance regimes that mule deer have evolved with where practical (particularly in un-roaded undeveloped landscapes) and using well-planned mechanical treatments where it is not.  Decisions regarding treatment techniques need to be sensitive to the greater health of the habitat of which mule deer are only a part.  Unfortunately, for a variety of reasons (including a projected increase in the state population of one million people by 2020 per GOCO) deer numbers are likely to decline despite management efforts.  Educating the public and setting realistic expectations will be especially important during this process.

Strategic priority #2:  BHA is concerned with the proposed focus on predator control as a means of increasing mule deer populations.  While predators can undoubtedly have localized impacts on populations, a large-scale CPW-funded predator control program is one perceived ‘solution’ to a much broader problem that we strongly oppose. Predators are a vital part of healthy ecosystems and play a key role in keeping ungulate populations “wild” and dispersed.  CPW needs to prove that specific predators have significant and lasting advantage over their prey and represent a long term threat to deer numbers in a specific region before control attempts are considered.  While predator management may have a place in the broader strategy, blaming predators for declines in mule deer populations is often a knee jerk reaction that has many proponents but questionable scientific support.   In addition, predator management can be very costly (a major concern for CPW in light of current financial difficulties) and ultimately damaging to the greater long-term health of the landscape.

Strategic priority #4:  BHA supports the proposed components of implementation to reduce the impacts of highways on mule deer survival, movements and migration.

Strategic priority #5:  BHA supports the proposed components to reduce the impacts of human recreation on mule deer.  BHA has consistently supported efforts to limit human activities in critical habitats.  Research has consistently shown that motorized disturbance has a disproportionate impact on big game habitat, thus we urge/expect CPW to provide honest and factual biological where motorized developments pose a risk to habitat.  While motorized impacts on habitat are often most pronounced, we urge CPW to also provide honest assessments on the impacts that other forms of developed recreation and human disturbance have on mule deer habitat (see references below).

Strategic priority #6:  BHA supports the proposed components of implementation to regulate doe harvest and provide youth opportunity.  Limiting doe harvest has been shown to increase deer populations in specific regions with otherwise healthy habitat.  BHA recognizes the need for and supports efforts to encourage youth and new-hunter participation in hunting.

Thanks for taking the time to consider our input.   Please don’t hesitate to let us know if there is any clarification needed on our comments.   We look forward to being involved throughout the rest of the process.

Impacts of Recreation on Mule Deer