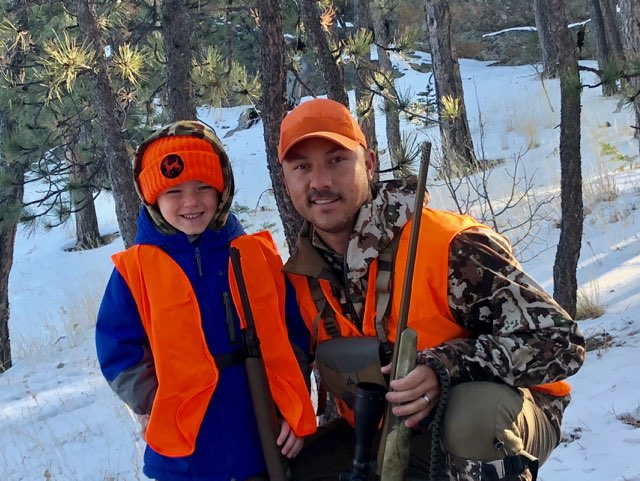 Peter was born in Scranton, Pennsylvania, but he was raised (K-12) in Fort Collins, after his family moved to Colorado in 1983. “My earliest memories of the outdoors were filled with fishing for trout with my grandfather in the Rocky Mountain National Park region. We also caught bass and pan fish in the many lakes and reservoirs of Colorado’s Northern Front Range,” Peter said. “He was a patient man, tying, baiting and managing my lines while I most likely was digging in the dirt or throwing rocks in the water.”

Peter hunts elk, mule deer and antelope with a rifle, but also gets after upland game and waterfowl, in Colorado and Wyoming, with the Remington 870 his grandfather used. “The same grandfather who taught me to fish spent his younger years chasing all manner of game throughout Michigan and Kansas,” he said. “I still use his 20 gauge Remington 870 Wingmaster that was given to me after his death. That old shotgun along with some great college friends really got me into the field years ago.”

“I like to embarrass myself while trying to shoot pheasant and waterfowl later in the year,” Peter adds. “I primarily fish for trout on the Gold Medal Waters of the Poudre River or try my luck on the upper stretches of the Big Thompson.” Peter lives in Fort Collins with his wife, Jennifer, son, Brian, and daughter, Quinn. He joined BHA after attending a Steven Rinella MeatEater event in Denver.

And in the words of TR himself: “Our people are growing, more and more, to understand that in reference to the forest and wild creatures of the wilderness our aim should be not to destroy them simply for the selfish pleasure of one generation, but to keep them for our children and our children’s children.”

For more information about the Colorado BHA Habitat Watch Volunteer (HWV) program, visit: http://www.backcountryhunters.org/habitat_watchmen. You can also contact HWV Program Coordinator/chapter co-chair, Don Holmstrom ([email protected]), if you have questions/would like additional information. The chapter now has 37 HWVs with boots-on-the-ground in all eleven Colorado national forests.